Married in His Mind 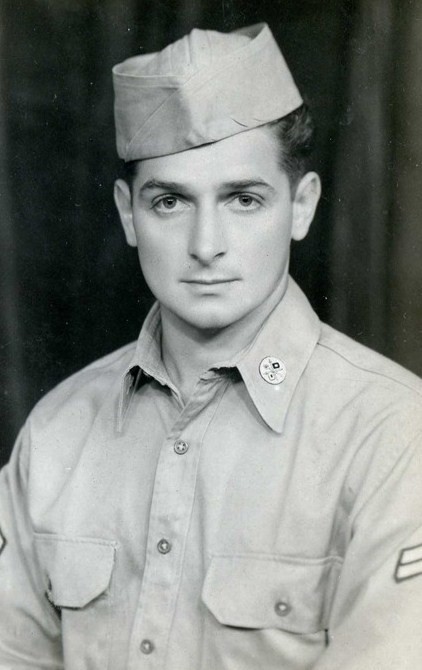 Arthur Kowalski was born on February 14, 1911 in Chicago to Jacek and Elsie Kowalski, both immigrants from Poland.  Neither Jacek or Elsie had had much education in Poland, but upon arriving in Chicago, Jacek quickly found a job working on the railroads.  As the years went on, he began to get involved in real estate and would buy businesses, such as corner grocery stores, hardware stores and taverns, operate them for a little while and then sell them for a profit.  Elsie, who could neither read nor write, even in Polish, cared for their four children: Sophie, Teresa, Arthur and Nora.  When the children got a little older, she also helped Jacek keep the books for his businesses, as, it turns out, she was good with figures despite not being able to read.

According to Arthur, his father had a good reputation in the business world, but he was “rough and tough” and drank heavily.  Elsie was always having to be the peacemaker of the family; she wasn’t afraid of Jacek and wouldn’t back down or cower to him.  Arthur says that he never got along with his father, and says that he would have run away had it not been for his mother.

Eventually, Arthur graduated from high school, and his father surprised him by offering to pay for him to go to college so that he could become a lawyer and help him with his businesses.  Arthur refused for two reasons.  First, he had no desire to go into law, as he saw this as “a profession for liars.” Secondly, he felt too guilty to take his father’s money when the whole country was going through the Great Depression.  His father tried hard to “bully” him into going, but Arthur still refused.

Instead, Arthur got a job, or, rather, a string of jobs, though they were hard to come by.  He began going around with a peddler, then found a job as a caddy and then as a printer.  None of these he liked very much, so one day, his mother slipped him some money to go downtown to a proper employment agency.  They accordingly sent him to an office supply company on Madison Avenue for what was supposed to be only a temporary position in the shipping department.

Anxious to prove himself, Arthur worked hard and fast and was soon more productive than anyone in the department, so the company kept him on.  He offered to work nights and weekends in addition to his day shift to save the company from having to hire extra people.  His boss liked him so much that when his son came home from college in California, he invited Arthur to socialize with him, wanting the two of them to become friends.  Arthur declined, however, saying that they were from two different classes and that he didn’t have the money to hang around “a bunch of college boys.”

Right at about this time, when Arthur was twenty-three, he was introduced at a dance to a young woman by the name of Margaret Paszek, who was just twenty years old.  Arthur describes her as “a knock-out.”  She was only twenty, but the two began dating.  Arthur says he fell in love with her right away, but he insisted on dating for five years because he wanted to be sure that she was the one.  “I wanted a solid foundation and some money in the bank before I proposed,” Arthur recalls.  Margaret was fine with waiting, Arthur claims, as her mother was very strict and probably wouldn’t have allowed her to get married much sooner, anyway.

Finally, though, in 1939, Arthur and Margaret married, but Arthur refused to have a reception, as he did not want to dig into his savings with no guarantee of getting it back in gifts from Margaret’s “mooching relatives.”  Despite this unusual beginning, the marriage seemed to go well at first.  Arthur continued working feverishly at the office supply company and rose to be not only a bookkeeper, but a manager.  He then decided to start taking night classes to get his CPA.  He was not very far along, however, when the war broke out, and he immediately joined the army.

Arthur was very proud of the fact that before he left for the army, he had saved up over three thousand dollars, so he knew Margaret would be okay in his absence.  As a child, his hobby had been to build radios, so once in the army, he ended up in radar.  He was offered officer training, but because it would mean a longer commitment, he declined it.  While he was stationed in the U.S., he came home to Margaret every single weekend, no matter what it took.  Then, when he was eventually shipped overseas, he wrote her an eight-to-ten page letter every day.

Arthur was eventually shipped to the jungles of New Guinea, about which he has many amazing stories, but was discharged home in 1944, severely underweight and diagnosed with malaria and “jungle rot.”  He arrived home, weak and sick, to Margaret and their six-month old daughter, Frances, or Franny.  Everything, though, had changed, he says.  Desperately ill, Arthur says that all he wanted to do was stay home and rest and get to know Franny.  He had no interest in “sex, drinking or going out,” but Margaret was “raring to go.”  She began to resent him wanting to stay home all the time, and began instead to go out with her girlfriends once a week.  Gradually, it grew to multiple times a week.  She started drinking more and even told him that she was having affairs.  None of this seemed to phase Arthur, however, who simply lavished all of his love and attention on Franny.

Finally, when Franny was nine years old, Margaret left Arthur and sued for a divorce, which Arthur, a strict Catholic, refused to give her.  Instead, he suggested they buy a house in Oak Park and try to start over, but Margaret refused as she saw this as a ploy on his part to get her away from her family who all lived nearby.  Margaret’s lawyer then proposed a legal separation, which Arthur also refused.  Arthur sought the counsel of the Church Chancery and finally agreed to the divorce, though he saw this as a grave sin, if he could have complete custody of Franny, a condition he expected Margaret to refuse.  Shockingly, however, she accepted, and the two went their separate ways.  Arthur got an immediate annulment, but remained “married in my mind” for the rest of his life.

From that point on, Arthur began his days at 5 am and ended them at midnight.  He devoted himself to caring for Franny.  He did all the housecleaning, the cooking, the laundry and the ironing.  He curled Franny’s hair in the morning, took her to school, attended her functions, picked her up from school, and had dinner ready every night by 5:30 pm.  He was determined, he says, to give Franny a “normal” life and to make up for the lack of a mother figure.  He even made it a condition for any new job he began that he would be allowed to leave every day at 4:55 pm, so that he would be on time to pick up Franny.

When he had returned home from the army, Arthur had been offered a chance to go to college on the G.I. bill, but at the time he turned it down, as he felt the stipend was not enough to support the three of them.  He instead asked for job training, and they set him up on a two-year program to work in the offices of General Motors.  Again, he was extremely industrious, productive and efficient, and he remained there beyond the original agreement, staying for a total of eight and a half years.  His whole career was spent working in the offices at car dealerships in some sort of bookkeeping or accounting capacity.  He was always in charge of a large staff of office girls, whom he hired, trained or fired, as needed.  He feels he was a strict but fair boss and credits himself as being exceptionally honest, precise, stubborn and persistent.  He admits to being a workaholic and a perfectionist.  He was frequently offered the “top position,” but he never accepted it, though he knew he could do the work, because he felt he would not be fairly compensated since he did not have a college degree.  As it is, Arthur is extremely proud of his work and his accounting skills and wishes he could have done more with them.

He is also proud of Franny and his accomplishment in raising her, though he did have some trouble with her during her teen years.  During that time, she began covertly seeking out her mother, Margaret, who, Arthur says, “filled her head with lies about me.”  Several times Franny ran away and when she was only seventeen, she got pregnant out of wedlock.  Arthur was at first devastated by this, but eventually came around to the new baby, Tommy, whom Franny refused to give up for adoption, despite Arthur’s pleading.  In the end, Arthur helped Franny to raise Tommy, who turned out to be “a wild one.”  Attempting to tame him, Arthur forced him into the ROTC during high school, and often threatened him with sticking him in the navy.  When Tommy finally graduated from high school after years of anguish on Arthur’s part, he really did go and join the navy and was stationed in Florida.  Many times he has apparently tried to apologize to Arthur for his past behavior and any hurt he might have caused Franny and Arthur, but Arthur has stubbornly refused to accept his apologies.

Besides working and caring for first Franny and then Tommy, Arthur also cared for his mother, Elsie, who was in a nursing home for the last seventeen years of her life.  Not only did Arthur visit her every day, but he would insist on getting her up, changing her clothes and her bedding, and taking them home with him to launder.  He says he had no time for hobbies, travel or friendships.  His socialization mostly consisted of relationships at work, though, he never dated anyone or even entertained that thought, he says, repeating that he remained “married in his mind.”

Just recently, he was admitted to the hospital for a hernia surgery and is therefore staying in a nursing home for a short period of time while he recovers.  He lives alone now, Franny having eventually married, and keeps himself busy, he says, with housework and gardening.  Arthur is a very pleasant, sweet man who has an amazing memory and will endlessly share stories of his life if asked.