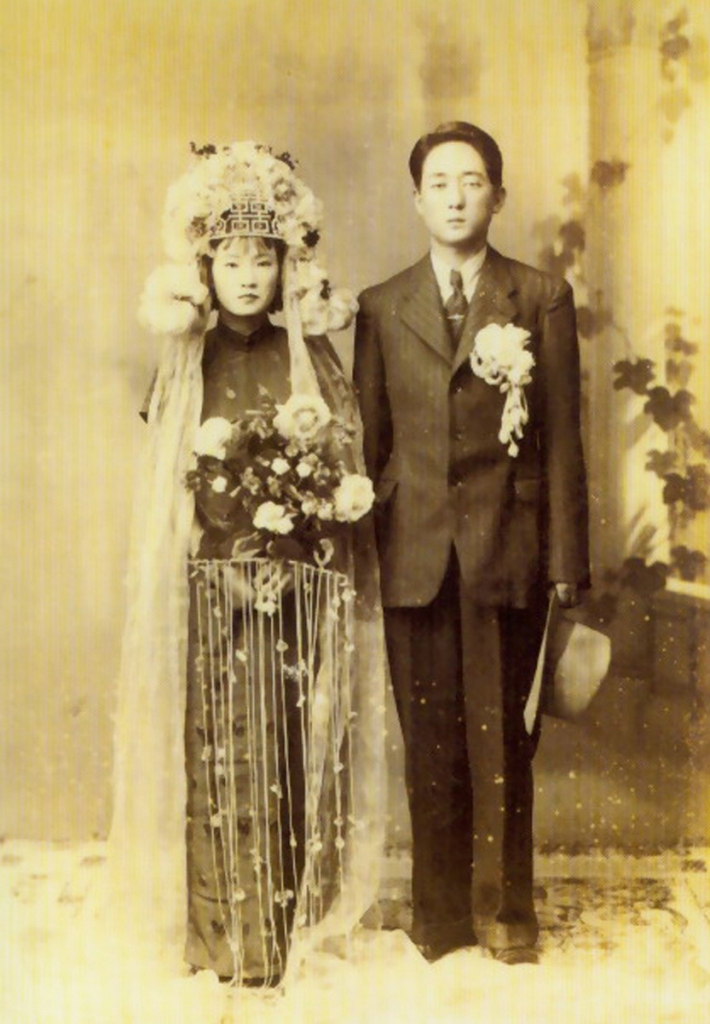 Though they were already considered somewhat well off, Hai’s family was no exception to this practice, with Jie and several of his sons working in America in shifts.  When Hai was fifteen, her parents arranged for her to marry Wu Hong Lim, who had been working in America with his father from age 12.  When he turned eighteen, he was sent back to China to marry the girl his parents had selected for him, Hai Bo Song.  He stayed long enough for Hai to give birth to a healthy son, Tai, and then returned to America to complete his stint.

Wu stayed in America beyond the normal fifteen years due to WWII.  After the war ended and the Communists moved in to take over China, thousands of people fled, trying to get to America to be reunited with their fathers or husbands.  Hai and Tai were among these and managed to make it out of China.  They eventually met up with Wu in Chicago.  There, Hai and Wu had two more sons, Shi and Ning.  Tai was well over fifteen by the time Shi was born, but a fifteen-year gap between siblings was obviously common for Chinese families at the time.  Wu and Hai lived for many years in Chicago’s Chinatown, with Wu working as a waiter and Hai eventually getting jobs in factories.  In the 1960’s, the family moved to the north side of Chicago.

Ning says that Hai is a quiet woman and easily pleased.  She enjoyed socializing with her Chinese neighbors when they lived in Chinatown and has never really learned to speak English well.  She also liked crocheting, playing Mahjong, gambling, and watching Chinese soap operas.  She only left Chicago once, and that was to go to Boston for a relative’s wedding.  She also enjoyed going to Chinese funerals.  Once they moved to the north side and had a small plot of land, she also took up gardening, something she hadn’t done since she her days in China.

Tai and Shi eventually married and moved to the suburbs, but Ning has remained all these years with his parents, caring for them as they aged.  Except for a hairline fracture in her back after she fell in 1972, Hai has remained in good health until recent years.  In the early 1990’s, Hai developed Shingles and, according to Ning, has slowly “gone downhill” since then.  Ning says that whenever the weather changes, she still has twinges of pain.  Two years ago, she fell again, this time breaking her hip, but she eventually recovered, slowly but surely.  Ning says that his mother is amazingly strong, both physically and mentally, and that she has always been independent from a young age out of necessity. “She never gives up,” Ning says.

Ning was hopeful that he and his mother, slowly improving now, could get back to some sort of routine when she suddenly collapsed one day in severe pain.  Ning called an ambulance, and it was discovered that part of her intestine had ruptured.  During the resultant emergency surgery, the doctors further determined that she was also suffering from colon cancer.

Hai was accordingly discharged to a nursing home with hospice care, though not the same home where Wu is a resident.  Ning thought it best for them to not be in the same place, as in their later years they had become very argumentative.  Also, Ning reasoned, they would not be together, anyway, with Wu being on a separate Alzheimer’s unit.  Ning wanted Hai to be in a smaller facility that could hopefully give her more attention.  Tai and Shi and their families have started to become more involved and visit often, though it is Ning who continues to come twice a day, every day.

Hai seems accepting of her prognosis and seems to take her fate in stride.  She is very alert, though she can only communicate through an interpreter.  She says that she is not afraid to die and that she has lived a good life.  She does not seem to enjoy sitting with the other residents, and prefers to sit alone in her room, waiting for Ning to come each day.