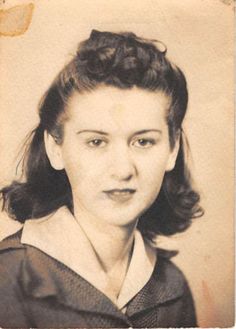 Aurora Sienkiewicz was born on April 5, 1911 to Giovanni and Rosa Corvi, both of whom grew up in the same small village in Italy.  Giovanni’s and Rosa’s families lived near each other, and the two of them often played together as children.  The story goes that one day when Giovanni was passing by, Rosa pointed to him and told her mother that someday she was going to marry Giovanni.  It was a prediction that came true, and when they both turned eighteen they married and soon had a son, Marco.

Times were hard in the village, however, and there was little work.  So when Marco was five years old, Giovanni decided to go to America and look for work a new life for them.  Once in New York, he happily soon found a job and then immediately sent for Rosa and Marco to join him.  The two of them came by ship with many people from their village, so they were not alone on the journey.  Once Rosa and Marco arrived in New York, Giovanni found them an apartment in Brooklyn.  Rosa got pregnant several times, but she always miscarried.  They were all girls, and Rosa named them all Aurora after Giovanni’s mother, as was the custom.

After a few years in New York, Giovanni got restless and moved the whole family to Louisiana, where another son, Frank, was born.   Again, the family settled down, but unfortunately Giovanni could not find any work, so they decided to go to California.  They took a train to Chicago and were delayed there for some reason for almost a weak.  In that time, Giovanni stumbled upon a good-paying job at a cigar factory, so they decided to stay.  Rosa also did piece work at home, mostly sewing buttons onto trousers.  In Chicago, she was finally able to carry a girl to term and once again named her Aurora.  Two years later, Rosa had her fourth and last child, Vincent.

Aurora went to school through the 8th grade and then got a job in a paper box factory at age fourteen.  She worked in various factories during her teen years, but she especially liked working at a stencil factory because they got to use chemicals.  She found chemistry very interesting, and she became friends with one of the factory chemists, John Petronka.  Aurora says that she is pretty sure John had a crush on her, but he was already engaged to someone else.  Thus, he introduced her to his good friend, Thaddeus Sienkiewica.  The two of them hit it off right away, and after dating for just six months, Thaddeus proposed.  Both Giovanni and Rosa were not thrilled about their only daughter marrying a Pole instead of an Italian, but they allowed them to get married anyway.

Thaddeus worked for Western Oil, a job he kept for forty-five years, and Aurora stayed home to care for their four children: Gloria, Phyllis and the twins, Roman and Roy.  Like her mother before her, Aurora had many miscarriages over the years, and finally, after the twins were born, her doctor advised her to have a hysterectomy, to which Aurora agreed.  When all of the children were in school, Aurora decided to go back to work and got a job as a kitchen aide in various hospitals.

Sadly, Aurora’s marriage was not a happy one, as Thaddeus turned out to be an alcoholic.  Aurora says that this is why she was always a loner and had no friends or hobbies.  “I had too many problems at home to worry about,” she says of that time.  Having no one else to turn to, Aurora would sometimes confide in her mother, Rosa, regarding her marital woes, but Rosa, and Giovanni, as well, refused to ever talk badly about Thaddeus.  “We told you you should marry an Italian,” they often scolded her, and told her that she would just have to put up with it.

Finally, however, Aurora could no longer stand to witness how Thaddeus’s behavior was affecting the children, so she separated from him.  It was an extremely difficult thing to do, especially as her parents disapproved of divorce.  They refused to support her, either financially or emotionally.  Thaddeus moved into his own apartment, and though Aurora had some contact with him over the years, she pretty much raised the family on her own.

After her divorce, Aurora still stayed home much of the time in the evenings, but felt freer to make friends and invite them over.  Occasionally, she would venture out to a movie or bingo at St. Philips, where she was a faithful parishioner.  Only once did she take a trip, which was to go to California to see her brother, Vincent.  She continued working as a kitchen aide until she was in her sixties.

When Aurora was in her mid-seventies, her son, Roman, died at age forty-five of complications due to his colitis condition.  He was not married, and “didn’t take care of himself as he should have,” Aurora explains.  “He lost the will to live.”   Aurora was nearly broken by his death and refused to ever speak his name after the funeral was over.  She still mourns him even now, she says.

Up until very recently, Aurora was living alone and was still active and able to care for herself.  About a year ago, however, she had a small stroke and fell.  As Phyllis is the only one of Aurora’s children still living in the area, much of the burden of caring for Aurora fell to her.  The staff at the hospital suggested that Aurora be discharged to a nursing home, and Aurora reluctantly agreed with this decision.

While Aurora seems resigned to her fate, Phyllis does not.  Because of her own health problems, she cannot care for Aurora at home and seems to feel very guilty about this.  In just the last year, Phyllis has changed nursing homes for Aurora three times, as Phyllis—not necessarily Aurora—has been very unhappy with each placement, including the current one.  Phyllis frequently lashes out at the staff, accusing them of a variety of things and can even be verbally abusive at times.  Already she has threatened to remove Aurora yet again.

Meanwhile, Aurora seems not aware of Phyllis’s distress.  She appears to be content, her favorite activity being bingo.  At times she is confused and believes that her clothes are missing, which causes her to complain repeatedly to the staff.  Once she becomes upset, she then tends to bring up Thaddeus and the anger she still feels towards him.  “He’s living alone, free and easy, and here I am!” she will say, over and over.  Normally, however, she is a pleasant woman who enjoys having conversations with the other residents or watching TV with them.