“They Don’t Know How Much We Love Each Other.” 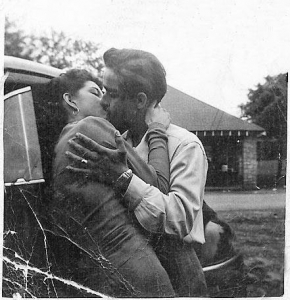 Anton Lungu was born near Brasov, Romania on July 22, 1936 to Ciprian and Ileana Lungu.  Ciprian was a soldier, and Ileana cared for their four children.  Anton only went to the equivalent of seventh grade before he quit to work at a construction job.  He stayed in construction his whole life, except for the two years he spent in the Romanian army.  He served his time and even became an officer after attending a special training school.  Once released, he returned to construction work.

As a young man, Anton was apparently very handsome and popular.  He had a motorcycle, a leather jacket and lots of girlfriends.  He did not really fall in love, however, until he was 28 years old when he happened to meet the daughter of his boss.  The girl’s name was Bianca Ardelean, and at the time that they met, she was only 17 years old.  From the moment that he met her, Anton spent every day trying to persuade Bianca to go for a ride with him on his motorcycle, and each time she would refuse.  One day, however, she finally said yes.  Delighted, Anton devoted the whole day to her, spoiling her and giving her gifts and then, according to family legend, refused to bring her back home!  At the end of the day, he proposed to her, and she said yes, so they drove off to elope.

Unfortunately, however, their plan was foiled.  Since Bianca was still a minor, she was required to have her parents’ permission to marry, so they were turned away from the registrar’s office.  In their own eyes, however, they were “married” and found a place in town to stay for the night.  They then found an apartment, where they proceeded to live as man and wife.  When Bianca’s father finally discovered his daughter’s whereabouts, he was furious, but Bianca refused to leave, saying that she was Aton’s “wife.”  Anton continued to work construction, and Bianca cared for the two children that eventually came along: Bogdan and Crina.  It was not until Crina was seven that Anton and Bianca finally legalized their marriage.

Crina reports that her father idolized her mother.  He spoiled her constantly and often claimed that Bianca was “the greatest woman in the world,” and that no one else even came close.  Crina says that her parents were completely devoted to each other and that they had a very happy marriage.

In the early days of their relationship, Anton developed a pattern of working very hard at a job, saving money, and then quitting so that he and Bianca could spend weeks at a time together—going to the movies, going on picnics and taking long walks.  When their first child, Bogdan, was born, however, Anton became more responsible and stopped quitting jobs.  He began working fourteen hours a day, rarely took a vacation, and did everything for Bianca and his two children.  Crina says that her father was a very hard-working, passionate man who was full of energy and life.  He loved gardening and painting, and he never failed to clean the house from “top to bottom” every Sunday.  Though he was passionate, he was never angry, Crina reports.  “He never raised his voice to us, never screamed, yelled, swore or spanked.”  His philosophy, she says, was that a person could be talked to rationally and be won over through kindness.

In 1984, when Anton was 48 years old, he decided that the family should leave Romania and move to the United States.  Bianca had a sister, Anca, who had been living in America for twenty years and who would periodically return to Romania to visit family and friends.  The Lungu family loved hearing Aunt Anca’s stories about her life in America, and they would sit enraptured, listening to her tales.  After one particularly nice visit from Anca, Anton decided that they, too, should move to America—that it would be good for the children to live there.  Crina says that her father was always up for an adventure and that this seemed like “a wonderful one to undertake.”

Thus, in 1984, Anton moved the family from Bucharest to Chicago, which is where Anca was living.  They all bought a house together, and Anton found work in construction, just as he had in Romania.  For the most part, the family enjoyed their new country and remained very, very close.

In 1991, however, Anton began experiencing severely debilitating headaches.  He finally went to the doctor, who diagnosed him as suffering from an aneurysm.  Anton was rushed into surgery, but suffered a stroke immediately following it, which left him in a coma for eight months.  During those long months, Bianca rarely left his side.  Eventually, Anton awoke from his coma, but he could not speak.  Then, after several weeks, he began speaking in perfect English, with no accent at all, and with perfect grammar and diction.  It was extraordinary, and no one could explain it, even the doctors.  This lasted only a brief time, however, before he lost this ability and oddly went back to speaking Romanian, apparently with no knowledge of his ability to speak perfect English.

Anton was eventually allowed to go back home, with the family taking turns caring for him around the clock.  Unfortunately, the situation became worse when Bianca received news that her father back in Romania was dying and that he was asking for her to come back for one last visit.  Bianca was very torn about what to do considering the sometimes rocky relationship she had with her father ever since she ran off to marry Anton.  She desperately wanted to make her peace with him, but she felt she could not possibly leave Anton.  Eventually, Bogdan and Crina made the decision for her and insisted that she go back to Romania, promising that they would care for Anton in her absence.

Bianca finally agreed to go, but almost immediately upon her departure, Anton began to go “down-hill.”  He had already been suffering from confusion and obsessive thinking, but it got worse without Bianca constantly by his side.  In her absence, he began to have increasing episodes of shouting and screaming, which was completely out of character for him, and he refused to let anyone help him, even Bogdan and Crina.  In desperation, his children called his doctor, who then arranged for Anton to be temporarily placed in a nursing home until Bianca returns.

Anton has not made a very smooth transition to the facility and constantly asks for Bianca.  Finally, Crina told him that Bianca  is ill and in the hospital.  They do not dare tell him that Bianca is in Romania, as they feel this would push him over the edge, as he constantly begs to be taken back there himself.  Bogdan and Crina visit daily, counting down the days until their mother returns from Romania.  Once she is back, they plan to take Anton home, where his dog, Charlie, is apparently pining away for him.  The staff have cautioned them that removing Anton is very unrealistic because of the level of care that he requires, but, Crina says, “they don’t know how much we love each other.”