She Made Her Way to America Alone, Age 14 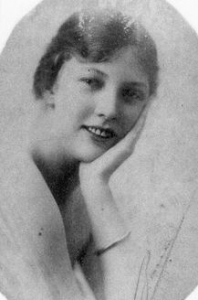 Mirna Claesson was born on November 29, 1900 in Velika Gorica, Croatia, near Zagreb.  Her parents were Dejan and Nada Juric.  Mirna was the oldest of three children and went to school as far as the sixth grade.  At that time, when she was about eleven, her mother died.  Following her death, her father, Dejan, decided that he would try to start over in America.  He left his two youngest children, Emil and Blazenka, in the care of a relative, and took Mirna, age 12 at this point, with him on the long journey.  His plan was to send for the younger two once he was established in his new country.

Unfortunately, however, he and Mirna only got as far as the Hungarian border.  The officials there would not let Mirna cross as she had no paperwork, and Dejan could not prove that she was really his child.  Desperate, the two agreed that Dejan would cross the border and continue on to America and that Mirna would make the return journey back to Croatia on her own.

Once back at home, she began the long process of trying to get her papers in order, though it took a couple of years to achieve this as well as to save enough money to start the journey all over.  When she was fourteen, she was finally able to set off again, this time hoping that everything was in order.  She again left her brother and sister behind and managed to travel cross-country, alone, and eventually boarded a ship for America.

On the sea voyage, Mirna became desperately ill.  When she finally arrived at Ellis Island, she was nearly sent back because of a terrible eye infection she was suffering from.  By some chance, she was instead quarantined.  Eventually, her condition did improve and she was sent on her way.  She traveled by train to Chicago, where she was finally reunited with her father.

Dejan had since remarried and worked in various factories around the city.  Mirna quickly found work as a seamstress, and she and her father and his new wife were able to send for Emil and Blazenka after about a year.  The family was not reunited for long, however, before Dejan died in 1918 of the flu epidemic.

That same year, Mirna met a man by the name of Paul Jagoda at a birthday party of a mutual friend.  They began dating and, after a very short courtship, were married.  Mirna was 19 and Paul was 30.  By 1920, Mirna gave birth to their first child, Paskal.

In 1924, the young couple decided to move to Medon, Ohio, where they rented a farm.  It was there that they met their life-long friends, Anna and Anders Claesson, who lived on the neighboring farm.  When Mirna gave birth to her second child, Wilma, it was Anna Claesson who acted as midwife/nurse for the rural doctor when no one else could be found, even though she herself had no children.

After Wilma’s birth, Mirna’s health declined and she began to have problems with her kidneys.  Much as they hated to leave their farm and their good friends, Paul and Mirna decided to return to Chicago in hopes that Mirna would get better medical care.  They found an apartment in Rogers Park, and Paul got a job as a janitor for a large apartment complex.

Eventually, Mirna’s health improved, so in 1933, they decided to go back to Medon, this time with enough money saved to put a down payment on a farm of their own.  They worked the farm for thirteen years until Paul died very suddenly one day of a heart attack at age 56.  Mirna stayed on at the farm with the help of the Claessons, who were still their very good friends.

Two years after Paul’s death, however, Anna Claesson died of cancer.  Now it was Mirna’s turn to comfort Anders, and as time went on, the two old friends fell in love.  It was a very smooth transition for Paskal and Wilma to accept their new step-father, as Anna and Anders had known them all their lives and had tended to spoil them, whenever they got the chance, never having had any children of their own.

This was 1946, and after they were married, Mirna and Anders decided to leave all of their memories behind in Medon and went to Chicago where they bought a house in Berwyn.  Anders found a job as a foreman and was later the co-owner of Ettinger Manufacturing Company.  He and Mirna had many happy years together until he, too, died of a heart attack at age 84.

Mirna lived alone after that and continued to bake and to garden, which had always been her biggest hobby.  In fact, back in Medon, she had had a reputation in the area for having the most beautiful vegetable and flower gardens.  So visually stunning were they that often people traveling through town would stop and photograph them.

On Mirna’s 85th birthday, Paskal and Wilma gave her a big birthday party and invited lots of friends and family.  Mirna enjoyed every minute of it and was, up to that point, perfectly alert and independent.  Soon after the party, however, Wilma began to notice that her mother seemed to be “slipping” mentally and was becoming more and more agitated.

Things seemed to worsen quickly, and Paskal and Wilma consulted about how to handle the situation.  They finally decided to hire a private nurse/housekeeper to live with Mirna, but it was not a successful arrangement.  The two personalities clashed, and Mirna’s appetite declined severely.  Twice she managed to elude the housekeeper and was found wandering in the neighborhood, lost and disoriented.  Wilma and Paskal, both retired themselves, knew something else had to be done, but neither could handle bringing Mirna to live with them.  Instead, they reluctantly decided to admit her to a nursing home.

Between them they decided not to tell Mirna the whole truth behind the plan, as Mirna had sworn all her life that she would rather die than go into a home.  Needless to say, Mirna was very angry and agitated, as well as confused, upon her admission.  She has since calmed down a bit, however, now that she has met some of the other eastern European residents with whom she can speak.  Likewise, the activities department has recruited her help in the garden, and she seems to enjoy all of the ethnic food provided by the home, which pleasantly includes a glass of beer or wine with dinner.  Mirna is a very lovely woman, eager to please, though at times confused.  She seems to believe that her stay here is temporary until Paskal and Wilma “fix up a room” for her in Wilma’s house, hence her distress has lightened considerably and her adjustment is improving.