From the Luftwaffe to Chicago Tool and Die 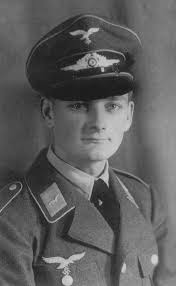 Deiderich Muller was born on July 27, 1921 in Dortmund, Germany to Adolf and Elisabeth Muller. Elisabeth had been married before to a man named Karl Achterberg and had one child with him, Ada, before he was killed in the First World War. Elisabeth was apparently a very strong, dominant woman and married again, this time to Adolf Muller, a factory worker. They also only had one child, Deiderich.  Not much is known about Deiderich’s early life except that he received very little schooling and that at a very young age, he began working with his father in the factory.

When World War II broke out, however, Deiderich was forced into the German air force and served as a radio dispatcher in the air. It is a part of his life that he has never talked about, even to those closest to him. He was shot down at some point and captured and was taken to a prisoner-of-war camp in Holland. This is all he will say about that time in his life.

When the war was finally over, Deiderich decided to come to the United States to start a new life. He came to live with his aunt and two cousins in Chicago and got a job as a tool and die maker. He was apparently a very hard worker and also very shy. All of the friends he made here were also German, as he could speak to them easily and could avoid having to become fluent in English that way. He joined a German club and spent a lot of his free time playing soccer with his friends.

When he was about thirty years old, however, he began toying with the idea of going back to Germany.  He changed his mind, though, when he met a woman by the name of Gertruda Hoffman. Gertruda, who was several years older than Deiderich, was a Polish/German mix and could speak German, much to Deiderich’s delight.  Deiderich was apparently very attracted to her and was disappointed to learn that she was already married.  Though she was separated from her husband, Deiderich tried to keep away from her, but they kept running into each other and soon began dating.

Eventually, Gertruda divorced her husband and married Deiderich. It was not a happy marriage, however, though it lasted thirty-one years. Gertruda was apparently a very cold, unhappy woman who often made fun of Deiderich’s broken English and forced him to go to night school to try to improve his language skills. Together they had one child, Anna. Gertruda did not want a child at all, but she finally gave in to Deiderich’s pleading for one. After Anna, though, she refused to have another one.

The marriage ended abruptly in 1985, when Deiderich came home from work and found a note from Gertruda saying that she had met someone else and was leaving him. Alone again, Deiderich went back to spending all of his time at his German club and went to many dances, where he met his new wife, Joan Mayer, who was of German and Irish descent. Joan and Deiderich married in 1991 and seemed very well-suited. They enjoyed a lot of the same things, Joan reports, and had common friends and interests, especially dancing.

After only two years together, however, Deiderich had a small stroke, after which Joan noticed that his behavior began to change. The most obvious difference to her was that he began to mismatch his clothes. Previously, Joan says, he had always appeared so dapper—neat and trim and usually dressed in a suit. Unfortunately, despite Joan’s efforts to help him, Deiderich seemed to get worse, and after a string of doctor visits, was eventually diagnosed with Alzheimer’s.

Against everyone’s advice, Joan sold the house, and the two of them moved into a condo, which further disoriented Deiderich. Desperate to provide for him, Joan hired nurses to help with his care, which seemed to work for a time. Recently, however, he has begun to be combative, not just with the nurses, but with Joan, too, and the decision was reluctantly made for him to go into a nursing home.

At this point in Deiderich’s life, his daughter, Anna, suddenly decided to get involved.  She and Joan have apparently never gotten along, and now that Joan had decided to put Deiderich in a nursing home, Anna insisted that it be in a facility near her home in Addison, Il.  Joan protested, saying that not only would it be very difficult for her to visit him out in Addison, but it would be likewise difficult for Deiderich’s best friend and cousin, William, to visit, too.  Joan and Anna continued to argue so much, that eventually a state guardian was appointed. After looking over the case, the guardian ruled in favor of placing Deiderich in the city near Joan and William.

Joan, though very pleased with the state guardian’s decision and with the nursing home in general, remains distressed about Deiderich’s placement. She visits constantly and repeatedly talks about feeling cheated out of the life she and Deiderich had planned.  She is hoping for a cure so that he can come back home, and they can take up their plans just where they left off. She does not accept that Deiderich’s condition and placement are permanent.

Deiderich, for his part, is relatively calm and non-combative. He does not interact with other residents, nor does he participate in many activities. While he does not seem agitated, he is confused and seems unhappy. When Joan is not visiting, he can be frequently found sitting alone in a chair, often crying. It is difficult for the staff to bring either of them any sort of comfort.