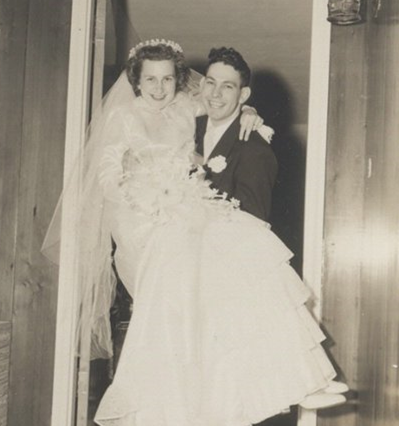 Russell Schreiber was born on July 26, 1911 in Chicago to Paula Banas and Adam Schreiber.  Paula was of Polish descent and was born in Chicago, while Adam was an immigrant from Prussia.  Adam worked in a factory, and Paula cared for their three children: Norman, Lloyd, and Russell.  When Russell was just two years old, however, Adam abandoned the family.  Paula tried her best to care for her three sons by herself by getting a job as a night cleaner.  Not long after Adam left the family, however, both Norman and Lloyd died in the flu epidemic.  After her husband’s abandonment and the death of two of her children, Paula found it hard to cope emotionally and therefore sent Russell to live on a farm in Wisconsin with her sister and brother-in-law.

According to Russell, he enjoyed his life on the farm with his aunt and uncle.  When he was about ten years old, however, his mother brought him back home to live with her and her new husband, Victor Kaczmarek, who was also a factory worker, just as his father had been.  Before long, Paula and Victor had a child together, a little girl they named Vera.  Russell says that while his step-father was not mean to him, he and his mother spoiled Vera rotten.

“From the moment she was born, she was the favorite,” Russell says and recalls how he had to drink canned milk while Vera was given fresh milk delivered each morning.  “That’s just one example of hundreds,” he says, though that one has always stuck in his mind.  Likewise, as Vera grew older, she began to sneak into his room and steal things that were of value to him.  His mother and step-father, however, never believed his accusations against her, so he installed locks on his dresser to prevent any further thefts.

By the time Russell was in sixth grade, he was sick of school and quit to get a job loading and unloading box cars.  During the Depression, he worked for the CCC cutting trees in Oregon.  When WWII broke out, he did not serve for some reason, but instead got a job at the Horeen Leather Co. as a machinist, a job he kept for thirty years before retiring.

As a young man, Russell enjoyed going to movies and playing cards and was active in his parish, Holy Innocents, where he served as an usher and as a member of the Holy Name Society.  He enjoyed doing things with a group of girls and guys from the neighborhood, such as going to dances or picnics.  When he was thirty years old, he met a young woman, Rita Chmela, whom he very much liked.  Rita worked for Gala Hair Products.  She had started in the factory at sixteen, and by age twenty-eight, she had moved up to working in the office.  Russell liked her very much, but was hesitant to ask her to marry him.  It was one of his uncles who persuaded Russell to “pop the question,” telling him that he needed to get out of his mother’s house and away from his sister, Vera, who was now quite cruel to him.

So Russell proposed, and Rita accepted.  Rita continued to work at Gala Hair Products until their two children, Marvin and Pearl, were born, after which she stayed home with them.  They began their married life in an apartment on N. Bishop and then moved to a place on W. Huron, where they remained until the early 1970’s, when Rita surprisingly inherited her parent’s two-flat on W. Erie.

Apparently, Rita had two siblings, Wilomena and Frank, whom she was never very close to, which was a similarity she shared with Russell and his own antagonistic sister, Vera.  As mentioned, when Rita married Russell, they moved to an apartment on N. Bishop, but when her sister, Wilomena got married to a man named Sam Mazur, the two of them moved into the upstairs apartment of the Chmela family home.  Rita’s father had died in 1935, so just her mother and her younger brother, Frank, remained in the first floor apartment.  In 1962, Rita’s mother died, leaving just Frank in the downstairs apartment, while Wilomena and Sam still occupied the top floor.  Unexpectedly, Sam died in 1970 of a heart attack, after which the tension between Rita and Wilomena grew worse, with Wilomena apparently screaming “The wrong husband died!” during a particularly heated argument with Rita.  Then, in 1972, Frank died and the house was somehow willed to Rita, which infuriated Wilomena.

Despite her sister’s anger, Rita and Russell decided to take up residence in the first floor apartment, though Marvin and Pearl were already grown up and had moved away to the suburbs.  Russell says that they tried to “mend fences” with Wilomena, but she refused to even speak to them.

Apparently, Russell and Rita enjoyed their retirement years.  Russell enjoyed watching sports or movies on TV, and Rita liked to garden.  She was happy to be back in her childhood home despite Wilomena’s continued resentment.  Russell and Rita did not do much traveling, but they did once go on an anniversary trip to Spokane, Washington to visit relatives.  They joined the Happy Hearts senior citizens club at Holy Innocents and had a lot of friends.

Sadly, however, in 1989, Rita passed away, which devastated Russell.  Alone in the apartment, he was surprised when, several weeks after the funeral, Wilomena appeared from upstairs, wanting to make amends.  She had come down to comfort Russell, but she instead ended up crying and saying that she regretted all the lost years she could have had with her sister.  Russell, always an easy-going man, willingly accepted her apology, and a new friendship began.

Russell and Wilomena began checking on each other and going to the store together, with Wilomena sometimes even making him dinner.  They continued living this way, with one up and one down, for about five years before Wilomena’s health began to decline.  Wilomena never had any children, so Marvin and Pearl often checked in on her when they came to visit their dad, helping her with things around the apartment or shopping for her.  In the spring of 1995, however, Wilomena became so ill that Marvin and Pearl could no longer cope with her various health issues and decided to admit her to a nursing home.

After Wilomena went into the nursing home, Russell was afraid to live alone in the building and asked Pearl to move into the upstairs apartment, which she agreed to do temporarily despite the fact that she was married with her own children and living in Arlington Heights.  She thought it might be easier to care for her dad this way, though he ended up falling down the stairs anyway and breaking a hip.  It was perhaps the catalyst that Pearl and Marvin needed to be able to rationalize putting their father in a home, as well.  Pearl could not keep living there, nor could she adequately care for him in her home in Arlington Heights.

Eventually, then, Marvin and Pearl saw no choice but to discuss with Russell the possibility of going into a nursing home.  Though he was very reluctant to leave the house on Erie, he agreed that it would probably be for the best.  To Marvin and Pearl’s surprise, however, Russell requested that he be admitted to the same nursing home as Wilomena, rather than one in the suburbs, which would be closer to them.  Pearl and Marvin tried to explain to him that it would mean they wouldn’t be able to visit as often, but still he decided to stay in the city.

At this time, Russell has made a relatively smooth transition to the facility.  He is at times forgetful, but he says he likes the home and all of the activities offered.  His favorite thing, however, is that his room is right next door to Wilomena.  At the time of his admission, there were no empty rooms next to Wilomena, so she agreed to move to a different floor so that she could be next to Russell.  “It’s the least I could do after all he put up with,” she says and is thrilled to have her brother-in-law be her neighbor again.  The two of them can frequently be seen walking the halls together, both with walkers, or sitting watching TV together in one of the day rooms.