Baseball and Extra-Marital Affairs – The Odd Life of Herman Neumacher 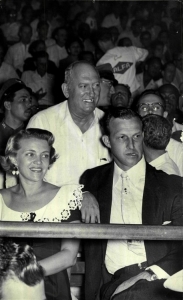 Herman Neumacher was born on February 2, 1903 in Chicago.  The names of his parents are unknown, but he is thought to be of Irish and German descent.  He was the youngest of ten children, and his family life seems to have been very chaotic, as his family moved constantly from apartment to apartment.  He spent the majority of his childhood on the streets playing baseball with his brothers.  He attended St. Hedwig’s until 8th grade and then quit to get a job in a radio factory making the cabinets that housed the radios.

When he was about twenty, Herman met a young woman, Pearl Ferguson, at a party that her sister was having.  Pearl was from an even bigger family than Herman and had fifteen siblings.  Her parents were very strict Catholics and were scandalized to the core when Pearl had married a man who wasn’t Catholic without their approval.  Fearing for her soul, they hounded Pearl until she finally bowed to their unrelenting pressure and divorced her first husband.  When she met Herman several years later, she was eager to be married again.  Herman eventually proposed, to the delight of Pearl’s parents, who were thrilled that her new man was Catholic.  Pearl, however, regretted her decision forever.

Herman, it seems, made a very unsatisfactory husband, and Pearl often referred to him over the years as “disturbed” or “unnatural.”  Almost from the first moment of their marriage, Herman showed no interest in her, never had any affection for her, and never seemed to even want to be with her.  But it wasn’t just her; he also did not seem to want to ever be with her family or friends and refused to ever go to any social events, including any sort of party or holiday.  Likewise, he refused to let Pearl have anyone over, so Pearl never once got to host a birthday party, a dinner party or a holiday in her own home.

According to Pearl’s niece, Dee, who helped provide the information for this story, Herman was indeed completely anti-social.  The only people her uncle ever socialized with, she says, were his brothers.  Herman, it seems, spent every free minute away from work attending baseball games with his brothers, drinking beer and eating hot dogs.

More than once, miserable and depressed, Pearl confronted Herman and questioned him about why he had ever married her in the first place, as it was obvious that he had never really loved her, even in the beginning.  She often accused him of marrying her as a way of staying out of the war —an accusation, she has noted, that he never refuted.

The situation grew worse, if possible, when Pearl accidentally discovered that Herman had secretly been having affairs all their married life, even taking some of his paramours to Las Vegas, all the while telling Pearl that he was going to Milwaukee with his brothers to see the Cubs play. Furious, Pearl left him and went to stay with her sister, Ann, who was Dee’s mother.  After about six months, Herman begged Pearl to come back to him, though Pearl couldn’t understand why, as he hadn’t seemed the slightest bit interested in her before. He even offered to give her money this time, which he had never done before.  From the moment of their marriage, he had refused to give her any money from his paycheck besides a few dollars a week, forcing Pearl to earn all the household money herself.

Pearl eventually caved in, not only to Herman, but again to her parents, who were upset that she seemed on the brink of divorcing another man.  Reluctantly, she returned to live with Herman, but it proved a terrible mistake, as he treated her worse than he had before.  Pearl says it was no use leaving him again and instead tried to make the best of it.

Pearl suspects that over the years Herman continued with his extra-marital affairs.  Likewise, she began to wonder if he was really at the ball games with his brothers, as he always claimed, or if he was instead there with his lovers.   In his later years, Herman apparently gave up drinking beer at the games, as he heard somewhere that drinking caused cancer.  Pearl also thought it odd that despite the nature of his job in a radio factory and his predilection for going to ball games, Herman was always well-dressed in a suit and tie and loved being “dapper,” as he liked to call it.  She says that he had no other real hobbies.  When he retired, he took a job as a security guard at the Merchandise Mart and worked there for five years, a job of which he was very proud.

In the last year or so, Pearl says she began noticing a change in Herman.  His health declined, and he became more confused and even dangerous.  He began carrying knives or sharp tools around, saying “I’m going to use this on Whino,” meaning Pearl, of course.  Pearl adds that this never made sense to her, as she was never a drinker.  Pearl grew increasingly afraid, especially as her own health has been declining rapidly as well.  Her niece, Dee, who has been helping both of them intermittently in recent years, decided to intervene when Herman began to get violent.

At that point, Dee took her aunt and uncle to view various nursing homes, though Herman did not seem to understand his surroundings at all.  Pearl, her own confusion increasing as well, at first assumed they were looking for a place for her to live and seemed happy about it.  Dee had to then explain numerous times that they were actually looking for a place for Herman, but suggested that perhaps Dee should move into a nursing home as well.  Pearl reacted very negatively to the suggestion, however, and claimed to be perfectly capable of living independently.  This, of course, is not true, as Dee has to help her at least weekly with shopping, cleaning, hygiene, and some cooking.  Dee does not wish to force her, however, and says she is willing to continue with the routine of stopping over at the house until Pearl gets more used to the idea of going into a home.

Herman, meanwhile, has adjusted relatively well to his new surroundings, though he doesn’t seem to completely grasp where he is.  It is regrettable that he is not able to tell his own version of his story, though Dee has confirmed that everything Pearl related is true.  Herman does not seem to get any comfort from Pearl’s visits and actually believes another woman on his floor to be his wife, a source of great sorrow to Pearl.  He remains calm and un-agitated and spends most of his days watching baseball on television.  Pearl seems reluctant to join him, but ironically is struggling at home on her own without him.