Living the Life of a Debutante 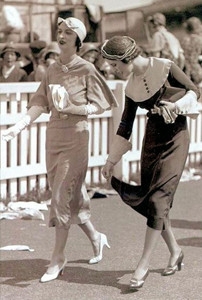 Elizabeth “Jane” Hileman was born on September 16, 1914.  Her parents were Mary Alice Newell and Cleveland Hines Hileman, both of whom had quite interesting stories, as well.

Mary was born in Ireland but immigrated to Port Huron, Michigan with her family when just a little girl.  Cleveland, meanwhile, was of Danish descent and was born and raised on a farm in Geneva, Ohio.  It turns out that as a young man, Cleveland took some sort of trip, whether it was for business or pleasure no one really knows, to Chicago.  And on the day he passed through Union Station, he happened to spot Mary Newell across the Great Hall.  She had come to Chicago to work, but hated her job and the city itself.  She had decided, therefore, to quit and return home to Port Huron and was waiting for her train when Cleveland spotted her.  Cleveland says he instantly fell in love with her and went over to introduce himself.  They were married soon after and found an apartment in Edgewater at Winthrop and Ardmore, where they remained for 45 years.  Cleveland worked as salesman for John Sexton Wholesale Grocers, and over time, he and Mary became rather wealthy.  They were not able to have children, however, so they adopted a baby girl in 1914 and named her Elizabeth Jane.

Jane says that she was an only child and spoiled rotten.  She also says that “people think adoption is bad, but I’ve never felt that way.”  Jane can remember the days when Edgewater and Rogers Park were thriving and upscale.  “People visited each other and had fun,” she says.  “People socialized more.”  She has fond memories of coming home from school and putting on her bathing suit, as would her parents, and they would spend the evening at the beach.  She says that people looked out for each other, and when it was particularly hot on summer nights, they sometimes slept at the beach with their neighbors.  “If someone was murdered in the neighborhood back then,” Jane says, “it took us months to get over it.  Now they just step over the body and keep walking!”

At one point in her childhood, Mary had to have an operation, and Jane had to go to a Catholic boarding school in Park Ridge while Mary recovered.  Poor Jane was so bashful that she dressed and undressed in her tiny locker. Jane eventually returned to Edgewater and attended Senn High School, which, she says, was beautiful back then.  “I lived the life of a debutante,” she says and recalls the socials, bridge games and fancy parties at the Edgewater Beach Hotel, where girls wore formal dresses and long evening gloves.

After graduating from high school, Jane attended the Art Institute and studied costume design.  She says that she loved it and learned so much, not just about art.  After she got her degree, she got a job as a commercial artist at Mrs. Overton’s Studio, the company responsible for designing the window displays at Marshall Fields.  Jane loved her new career and relished in a very active social life.

At age 24, Jane met Paul Keely Barsaloux through friends, and they married three months after their first date in 1938.  Cleveland got Paul a job at John Sexton Grocers, and Jane accordingly gave up her brilliant career in fashion and art when she got pregnant.  They had three children: Steve, Linda, and Paul, Jr.

Paul and Jane lived for a time in Chicago before Paul got transferred to Oklahoma and then to West Virginia, where they lived for 7 years and which came to seem like home the most.  It was about this time, however, that Paul and Jane’s marriage broke down.  Paul had had several affairs over the years and wanted out of the marriage, so they divorced.  In 1955, Jane took the children, ages thirteen, eleven, and nine, and returned to Chicago, where she did the best she could to raise them on her own.  Jane’s daughter, Linda, says that another man, Tom, may have come into Jane’s life at some point, but when asked about him, Jane will not elaborate.

Once the kids were raised, Jane moved to Hollywood, Florida where she spent the next 27 years and lived the life of “a loner,” according to Linda.  Eventually, however, she began having difficulty managing on her own, so she returned to Chicago, but found the adjustment very difficult.  Linda finally took Jane to a doctor, who has diagnosed her with Alzheimer’s.  It was a crushing blow for the whole family, and all of her children tried to learn as much as they could about the disease.  When it became apparent that the safest place for Jane to be would be a nursing home, Jane willingly agreed to go.  She is making a relatively smooth transition, and seems to enjoy talking with the other residents.  At this point, Jane is still very alert and aware of her condition.  She knows that she is at times forgetful and gets frustrated when she can’t think of a specific word, but repeatedly says to the staff “I’m pretty good for being crazy!”