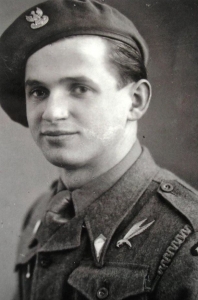 Gustaw Szwarc was born on July 13, 1916 in the tiny village of Gulin, Poland.  His father, Jacek, worked in an office, and his mother, Wera, cared for their seven children – five boys and two girls.  Gustaw was one of the middle children and attended school until the eighth grade.  He then got a job operating a drawbridge for trains.

When he was 23, Gustaw decided to join the Polish army.  Unfortunately, just six months later, in 1939, Hitler invaded Poland, and Gustaw found himself in the middle of the war.  He was taken prisoner by the Germans almost immediately and held for the duration.  When the Allies arrived, the English army gave him a job driving trucks in Germany.

In 1949, Gustaw decided to leave for America and ended up in Chicago working in a factory that made slot machines.  Over the next twenty years he worked in various factories around the city but returned to Poland frequently, staying for long periods of time—anywhere from six months to a year.  When he would eventually go back to Chicago, his unemployment checks had accumulated nicely in his bank account while he was away, leaving a nice sum to live on until he found another factory job in the city.  This became a lifelong pattern for Gustaw so that he was almost living a double life of sorts—one in Chicago and one in Poland, where he still had many friends and relatives.  Gustaw says he had many girlfriends in both places, but he never married.

There was one woman in Poland, however, Katarzyma, with whom he fell very deeply in love.  Katarzyma loved him, too, and wanted him to marry her, but in the end, Gustaw turned her away because he felt he was too old for her.  He was 45, and she was only 22.  Katarzyma begged him to remain in Poland and wait for her to get older, but he refused, saying that there was nothing left for him in Poland.   His father, Jacek, had died long ago at age 55 of a brain tumor, and just a few siblings and his aged mother were left.   Though Katarzyma was heart-broken, Gustaw remained firm and returned to Chicago, staying there for several years this time.  When his mother, Wera, was 98, Gustaw went back to Poland and was able to be with her when she died.  Unable to help himself and against his better judgement, Gustaw sought Katarzyma out and found that she had married someone else.

Back in Chicago, Gustaw’s only relative was a nephew, Karol, who also developed a pattern of going back and forth to Poland, where he still had a wife and child.  Karol first came and stayed with Gustaw for about a year, working in the city, before he went back to Poland.  After that, Karol began staying in Chicago for longer and longer periods, Gustaw helping him to find work each time.

As it happened, however, when Gustaw was just 54 years old, he was in a terrible car accident while driving to work.  He was nearly killed and was permanently disabled afterwards, forcing him to retire early, which caused a role reversal of sorts with Karol.  Where Gustaw had once taken Karol under his wing and looked after him, Karol now found himself looking in on Gustaw on a regular basis.

In the early 1990s, Gustaw’s health declined significantly, and he began to rely heavily on Karol to help him, which was difficult for Karol, as he usually worked a twelve-hour day.  The strain of driving to Gustaw’s apartment every evening to check on him eventually got to be too much.  This, plus the fact that Gustaw’s landlord wanted him out of the apartment because he could no longer take care of the place or himself, prompted Karol to admit Gustaw to a nursing home.  Karol was worried that Gustaw would not adjust, but so far he seems to be enjoying his new surroundings.  He says he is looking forward to the activities at the home, especially playing bingo for money and having someone to watch TV with.