“An Amazing Zest for Life!” 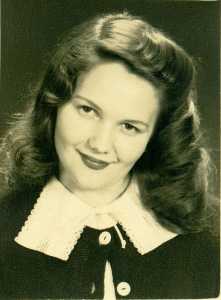 Wilma McDonald was born on April 10, 1910 in Chicago to Lech Kaszubski and Berta Kaluza.  Not much is known about the origins of Lech and Berta.  It is believed that they were both born in Chicago, though there parents had been born in Poland.  They did not call themselves Poles, however, but Kashubs, which is apparently an ethnic Slavic group descended from medieval Pomeranians.  Whatever their exact origin, Lech and Berta married young and attempted to make a life in Chicago.  Lech started out building truck bodies back in the days when they were still crafted of wood.  Later in life, he decided to open a restaurant near Milwaukee and Devon.  The restaurant was located right between two cemeteries, so a big source of Lech’s business was funeral dinners.  Berta, meanwhile, was a housewife who cared for their three children: Wilma, Cecelia, and Albert.

Wilma went to school until eighth grade and then worked at the family restaurant until she was sixteen.  At that time, she asked her parents if she could quit and instead got a job at M. Snower as a seamstress doing what was called “piece work.”  Lech was reluctant to give up one of hes best workers, but Berta convinced him to let Wilma try something else.  At M. Snower, each girl had a minimum number of garments that she needed to produce in order to receive her base pay.  Anything the girls produced beyond the minimum got them a bonus.  Wilma really enjoyed this job, so much so that she stayed at the company for fifty-four years, retiring when she was seventy!  Every day of her work week, she took two buses and the el to get there.

As a young woman, Wilma lived for dancing.  She loved to hear the big bands at the Aragon, Trianon and the Rainbow.  It was at one of these dance halls that she met Martin McDonald, whom she eventually married.  Marty had a job unloading mail off of boxcars, and the couple lived on McLean Avenue.  They had one child, Russell.  When the war broke out, Marty joined the army and managed to make it back safe, only minimally wounded, after two years of active duty.  He got his job back unloading the mail, but he and Wilma were not the same.  They began fighting a lot and could no longer see eye-to-eye on anything.  Finally, when Russell was eight, the couple divorced.  Wilma lost contact with Marty and supported Russell alone on her wages as a seamstress.

Russell reports that his mother was always on the go.  She had “tons of hobbies” and was always full of life.  Besides music—big band in particular—Wilma also loved the movies and went religiously, every Sunday, to the cinema.  She was also obsessed with crocheting afghans and knitting doilies and was constantly doing this in her spare time, even to age eighty-two.  She was an avid reader, her favorite genres being mystery and romance, and she would check out at least six books at a time and return all of them, finished, after two weeks.

Perhaps the biggest love of her life, though, was her grandson, Joseph.  In 1972, when Joseph was born, Wilma moved in with Russell and his wife, Eva, and helped to take care of Joey, even though she was still working herself.  She was a huge part of Joey’s life and was always interested in what he and his friends were up to.  Even as teenagers, if Joey had friends over for a BBQ, Wilma could always be found in the midst of them, having fun and joking with them.  She genuinely loved all young people in general, and enjoyed spending time in their company.

Up until the age of sixty-five, Wilma had never traveled beyond the Chicago city limits.  But upon her sixty-fifth birthday, she decided to take up traveling and went on bus trips all over the United States and even made it to Hawaii.  Over the years, she has belonged to several parishes: St. Stanislaw, St. Sylvester, and St. Cornelius, but never joined any groups or ministries in any of them, even in recent years, because, she claimed that everyone in those groups was too old!

Wilma continued working until she was seventy, but even after she retired, she kept up her very active lifestyle—which included smoking and drinking—until she was around seventy-seven, which is when she experienced the first of her “spells.”  She says she was at the library when the first one occurred.  Russell came and got her and took her to the emergency room, where she had “every test known to man.”  Nothing significant was found, but she continued to have several of these “spells” over the next six or seven years, each time experiencing a small loss in cognition as a result.

Recently, one of these spells caused her to fall, and she broke a hip.  While in the hospital recovering, she fell and broke the other hip.  Much to their great sorrow, Russell and Eva, who is experiencing her own serious health issues, felt they could not care for Wilma any more at home, especially considering her two broken hips.

Russell, who is not able to visit often because most of his time is taken up caring for Eva, describes Wilma as a very strong woman who never let things bother her.  He thinks that one of the reasons she liked to keep so busy was so that she wouldn’t have to dwell on the past or current worries.  “She has an amazing zest for life,” Russell reports.  “Nothing ever slowed her down.”  She prayed novenas often and surrounded herself with a lot of friends as a way of coping, he says.  Her grandson, Joe, who was such a big part of her life, lives in Montana now and has not yet been to see her since her admission.

Overall, Wilma is a very alert, pleasant woman who enjoys all aspects of the nursing home.  Only occasionally is she disoriented and confused, during which times she politely asks the staff to call Russell or Joey to come and get her.  Her favorite activities are bingo, game night, and big band hour.  She loves talking to the other residents and is very outgoing.