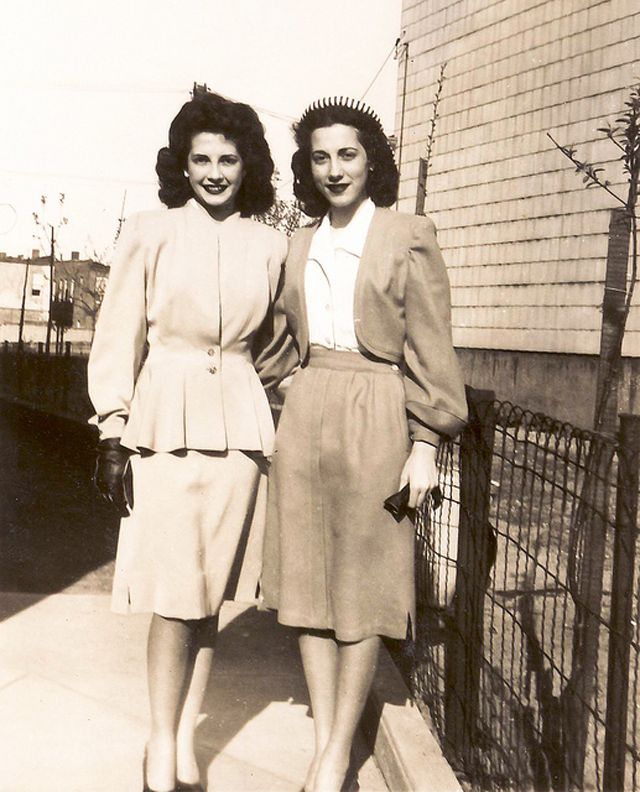 Caroline (right) with her sister, Effie

Caroline Alders was born on June 21, 1917 in Chicago to Fester Alders and Erna Hendricks, both Dutch immigrants who met on a ship to America in 1910.  Fester worked in a meat-packing plant in Chicago, and Erna was a housewife.

Fester and Erna’s first child, a boy by the name of Ernest, died when he was just five years old of a “throat epidemic.”  Caroline was born nine and a half months after Ernest’s death and was followed two years later by another girl, Eefje “Effie.”

Caroline graduated from high school, which she is extremely proud of, and then got a job as a bookkeeper at a small office in Chicago.  When she was just nineteen, her father, Fester, slipped on a piece of fat at the meat-packing plant and hit is head on the ground.  He suffered from some sort of internal hemorrhage for about two months before he killed himself.

Erna never really recovered from the shock of her husband’s accident and his subsequent taking of his own life.  After that, her own health began to decline and she was eventually diagnosed with a heart condition.  Right at about this time, Caroline was dating a young man by the name of Joseph Schultz, who worked as a law clerk and whom Caroline says she really loved.  When he proposed to her, however, she turned him down, which broke both their hearts, she says.  At the time, Caroline’s sister, Effie, was already married and living in Arizona, so Caroline felt it was her duty to stay and take care of her mother.  Joseph apparently offered to have Erna live with them, but Caroline says that at the time, she did not think that the proposed arrangement would have been fair to him, so she remained resolute in her rejection of him.  Years later, she heard that Joseph had been killed in the war, which she saw as a sort of justification of her decision.  “It proves it wasn’t meant to be,” she says sadly.

Caroline continued to work at various small offices around Chicago for the whole of her adult life.  She loved to read, and her only other hobby was taking classes at the YWCA at night.  Caroline says they were college level classes, but she did not get any credit for them.  She took many classes, she says, on anatomy and disease and biology and had a real fixation for a time on the various “tragedies” that befell her family over the years.  She says that she was always trying to figure out what really happened to her father and her brother and why her mother suffered from heart issues.  It is not clear whether she found all the answers, but she says she would have liked to have become a nurse.

When her mother, Erna, died in the early 1960’s, Caroline found herself alone for the first time.  She lived for another thirty years in the same apartment on Pulaski Avenue in which she had grown up, working until she was 75.  When she began experience some health problems herself, she decided to go and live with Effie in Arizona, whose husband had passed away several years before.  After about a year, however, the sisters realized it was not going to work out; both of them were too set in their routines.  Caroline then moved back to Chicago and got a garden apartment on Keystone.  Her landlord, Mr. Rondowski, has been keeping an eye on her for the last three years and reports that she has been needing more and more help in the last six months or so.  Increasingly, he became worried that he would go in some day and find her dead.

Apparently, that exact situation nearly happened just a couple of months ago when Mr. Rondowski went to check on Caroline and found her very ill in bed.  He called an ambulance, and she was taken to the hospital and diagnosed with pneumonia.  Given the fact that she has no family or friends to help her, Caroline’s doctor discharged her to a nursing home.  Effie has apparently been notified, but she cannot come due to her own health problems.

Caroline, meanwhile, is recovering physically, but remains depressed and angry.  She blames her current “miserable” situation on Mr. Rondowski, whom she believes was responsible for her placement here and feels betrayed by him.  She constantly asks aloud, “Why have I been made to suffer?” and refuses to join in any of the home’s activities.  She hates TV and will not talk with the other residents.  She believes that the nurses are “trying to control me” and that “they keep me locked up.”  She spends her time in her room, attempting to get her “affairs in order,” so that she can “get out of this place.”  Apparently to that end, she is constantly writing notes to herself on little scraps of paper she keeps in the front pocket of her dresses.  In fact, her room is a sea of notes, which she refuses to let anyone touch.   “What can I say?” she asks.  “I’ve had a terrible life.  All I have is scraps.”