The Little Girl She Always Wanted 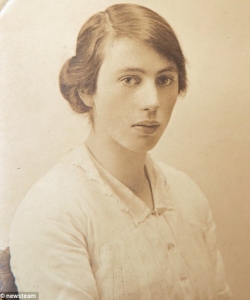 Opal Payne was born on October 18, 1913 in Chicago to Martin Vogt and Eileen O’Rourke.  Martin emigrated from Germany and worked as a stenographer in Chicago, while Eileen, who was of Irish descent, cared for their three children: Opal, Norman and Lee.

Opal went to John Marshall High School for a year and a half before quitting to get a job at the Martin Case Company running a machine that made decorative boxes.  After only about seven months on the job, Opal was involved in an accident at work and lost part of her right index finger as a result.  She continued working there, however, for another fifteen years before the company was bought out by Tailor Trunk Company.  The new owners kept Opal on as an employee, but instead gave her the job of putting the lining inside of trunks.

Opal was a very shy girl and rarely went out because she was self-conscious about her missing finger tip.  Her friends at work, however, were always asking her to come out with them to The Merry Gardens, which was a popular nearby dance hall, but Opal always declined.  Finally, one night, however, they were able to persuade Opal to come with them.  She was surprised and flustered when a young man by the name of Gilbert Payne asked her to dance almost immediately.  The girls pushed her to dance with him, so she nervously accepted.  She was delighted that he did not seem to mind her missing fingertip.

Opal and Gilbert began dating for a short time, but the relationship eventually fizzled out.  No one is sure why.  Gilbert went on to marry someone else, a woman named Evelyn Uthe, and Opal remained single, never venturing out much after her relationship with Gilbert ended.  Some people say she was pining for him, even after he married.

Gilbert and Evelyn had a little girl, Emily, but Evelyn died when Emily was just two years old.  Several years passed before Opal and Gilbert happened to run into each other again.  Gilbert asked her on a date, and Opal tentatively accepted.  She was twenty-nine by this point.  Something sparked this time between the two of them, and they eventually fell in love and got married.  Emily was about five at the time, and Opal adored her.  Gilbert worked in a factory that made airplane parts, and Opal quit working to stay home with Emily.  Opal got pregnant quickly, but sadly had two miscarriages.  She was eventually able to carry a baby full term and delivered a girl, whom they named Rose Eileen, but she died within a half hour of her birth.

Gilbert and Opal never had any children between them, but Opal was always grateful that she had Emily, whom she raised as if she were her own and to whom she was completely devoted.  Opal often said that Gilbert was meant to marry Evelyn first, as it allowed Opal to have the little girl she always wanted since she could not carry her own.

Opal and Gilbert seem to have had a happy life together until, after twenty-seven years of marriage, Gilbert died of eye cancer in 1969.  Opal was devastated, and relied heavily on Emily to help her through her grief.  She eventually got a job working in the St. Edward’s rectory as a way to distract herself.  After that, she became very involved with the Church, often going to bingo, and began a group that said novenas to Our Lady of Sorrows.  Later she joined the Ministry of Prayer and Praise, which asked all members to pray daily in their homes for special intentions.

Opal was always a very nervous, anxious person, Emily says, and dealt with her stress by being organized and by decorating the house, one of her favorite pastimes.  She loved to paint as a child and continued to do so as a young wife and mother, frequently painting the walls of the house different colors.  She also enjoyed doing crafts and loved to study history and to listen to music.

Opal has been able to live alone until very recently when she began to fall repeatedly.  Emily has been in the habit of stopping in to help her over the years, though she has had her own family—five sons!—to raise and her own declining health to deal with as well.  Emily arranged for a nurse to visit Opal once a day, which helped for a time, but it was eventually not enough, either.  Opal then made the decision on her own to go to a nursing home.  She seems relatively happy with her choice, though at times she becomes teary when spoken to.  Emily, on the other hand, seems very guilt-ridden and, at times, is critical of the facility.  She continues to visit her mother, sometimes bringing her two little granddaughters, Opal’s great-granddaughters, which cheers Opal immensely.