“Life Is What You Make of It” 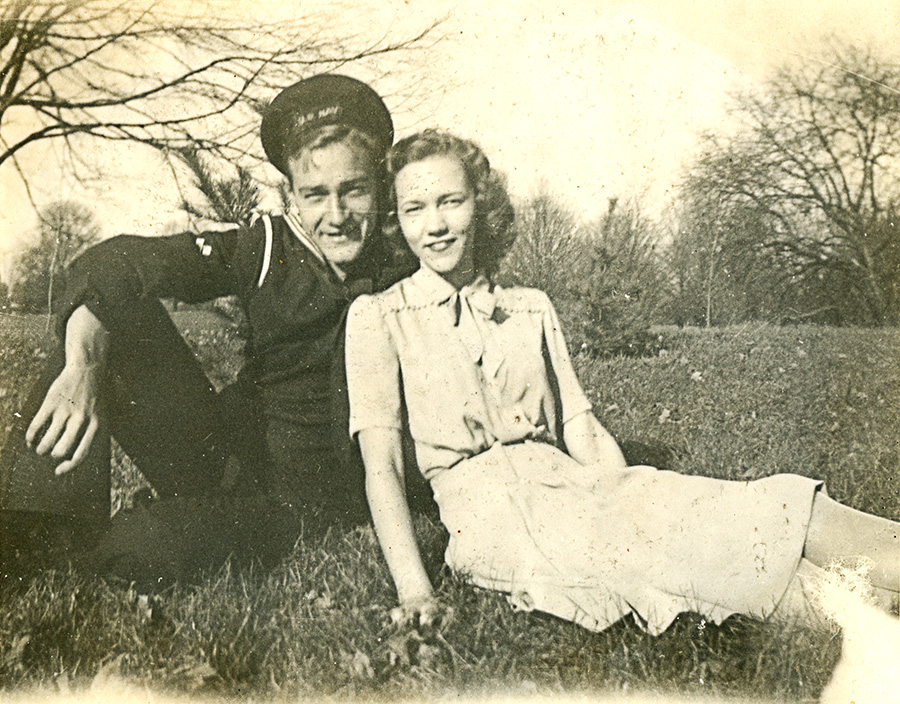 Sadie Davis was born on December 2, 1920 to Ervin Olmskirk and Caroline Fredericks in Clarkson, Nebraska.  Ervin worked in a bank, and Caroline cared for their ten children, Sadie being the oldest.

Sadie was a bright child and after finishing high school, won a two-year scholarship to Wayne State College in Wayne, Nebraska.  This was following the Great Depression, however, so when the two years were up, Sadie could not afford to stay longer, though she dearly loved her college experience and dreamed of becoming a teacher.  She contemplated ways that she could earn the money herself, but before she could come up with any answers, she received word that her father had been killed in a freak accident, which caused her to have to hurry home.  Ervin had apparently been out trimming trees when a large branch fell on him, crushing his skull and killing him instantly.  He was only forty-six years old.  At the time of her father’s death, Sadie was nineteen and her youngest sibling had just turned one.  Sadie naturally then gave up all hopes of furthering her education and began looking for a job to help support her mother.

The family had barely time to recover from Ervin’s death when they received word that Ervin’s brother, Anthony, had also died in Chicago.  With her husband recently deceased, ten children to take care of and little money, there was no way that Caroline could make the journey to Chicago for her brother-in-law’s funeral, though she fretted endlessly about who would represent the family.  Finally, she decided that she would send Sadie with an aunt and uncle who lived in nearby Omaha and who were planning on travelling up to the funeral on the train.   Sadie was chosen because she hadn’t yet found a job and because she was the same age as Aunt Betty and Uncle Tom’s only child, Imogene, who was also making the journey.  That way, Aunt Betty said, Imogene would have someone to talk to.

On the long train ride to Chicago, Sadie and Imogene enjoyed getting to know each other again, having not seen each other for several years.  Sadie told Imogene all about her college days at Wayne State, and Imogene told her all about living in the big city of Omaha.  Together the girls schemed that if they could somehow find jobs in Chicago while they were there for the funeral, they might be allowed to stay.

The funeral, it turned out, was all the way north of the city in a small vacation village called Fox Lake.  Many relatives showed up from out of town and rented small cottages rather than staying in hotels.  Sadie and Imogene began to look for work right away, though not much could be found in Fox Lake.  As it turns out, Imogene went to the beach one day without Sadie, who stayed behind in the cottage because she was feeling ill.  Later in the day, feeling a little better, Sadie ventured out doors and was intrigued by a young man working on a sail boat in the yard next door.  The two began talking over the fence and began a little friendship.  His name was Lowell Davis.

Eventually, after many days of talking over the fence, Lowell asked Sadie out on a date, and she accepted.  They had a wonderful time together and found it very easy to talk, but their new relationship threatened to be over just as it was beginning, as Aunt Betty and Uncle Tom were planning to return to Nebraska soon.  Lowell decided drastic measures were in order, so he sold his boat to buy Sadie an engagement ring and proposed to her.

Sadie said yes and arranged to stay with other relatives in the city until the wedding could be planned.  She found a job downtown in a millinery shop, and offered to help Imogene find something, too.  Aunt Betty and Uncle Tom refused to hear of any such nonsense, however, and despite Imogene’s pleading, insisted that she return to Omaha with them.

Eventually Sadie and Lowell married and moved to the northwest side of Chicago.  When WW II broke out, Lowell dutifully joined the navy.  Left alone, Sadie considered moving back to Nebraska to live with her family for the duration of the war.  In the end, however, she decided to stay in Chicago and wait for Lowell to come back.  When Lowell eventually returned from the war, unharmed, he got a job as a loan officer at a bank, oddly like her father, Ervin.  Sadie continued working in the millinery shop until her first baby was born.  In all, Sadie and Lowell had four children, all girls:  Shirley, Gloria, Brenda and Virginia.  Though she mostly remained a housewife, Sadie sometimes worked as a substitute teacher and also taught CCD classes at her church.  She was also very involved in the Girl Scouts and other community organizations.  Her hobby was writing the family history going generations back.

Lowell died in 1973, after which Sadie continued living alone, though she was very active.  Only recently, when she has been diagnosed with Hodgkin’s, has she begun to need help.  She was admitted to the hospital due to complications with her condition and was then discharged to a nursing home.  All of her daughters live out of town, except Shirley, who visits regularly and is very concerned for her mom.  She puts on a brave face in front of Sadie, but has been known to cry from guilt at not being able to care for her mom at home.   Meanwhile, Sadie is making an excellent transition, though she is sometimes very weak and tired.  She enjoys intellectual conversations or sitting and watching television with other residents.  She does not appear distressed or upset, but says that “life is what you make it.”  Indeed, this is a philosophy which Sadie seems to have lived by all her life, taking whatever circumstances she found herself in, and using them in a positive way.