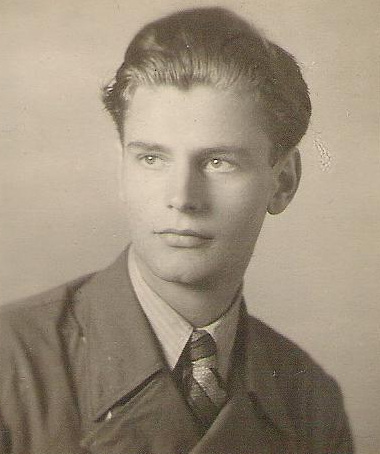 Casimir Winogrodzki was born on February 20, 1939 in Poland to Adalbert Winogrodzki and Zita Sadowski.  Adalbert was a farmer, and Zita cared for their six children: Bartholomew, Viola, Emil, Henryk, Casimir, and Jan.  Casimir went to school until the equivalent of the eighth grade and then became apprenticed to a baker in the same small town where he had been born.  His specialty became cakes, and he worked in “cakes” for ten years before branching off into “breads.”

Casimir worked at that same bakery for thirty-two years and got to know many people, including the sister of a fellow baker, who would come in often to visit her brother, Felix.  The girl’s name was Ursula Szewc, and before long, Casimir fell in love with her.  They married when he turned twenty-one and she was twenty-three.  They bought a house in the town, Casimir working in the bakery and Ursula working in the local health-care center.  Besides baking, Casimir had a real talent for woodworking and loved carving little toys, which he would often give to his favorite customers at Christmas time to give to their children.  He also loved music and winter sports, which he says were popular in that part of Poland.  He and Ursula eventually had two children: Elizabeth and Jan.

Casimir remained relatively healthy until he was in his fifties and then began experiencing terrible pains in his back.  After seeing many different doctors, it was finally determined that his back issues were job-related, and he was therefore put on disability.

At around this time, Ursula began receiving letters from her mother, Anna, in America to say she was having a lot of health problems herself.  Ursula’s mother had been born in America, but raised in Poland.  Anna married and had a family in Poland, but once all of her children were grown and settled, she decided to return to America, as she was technically an American citizen.  Ursula’s father, of course, went with her, but he passed away after only about five years.  Anna remained in Chicago, where they had settled, on her own, living independently, until she fell and was found it difficult to convalesce alone.  Thus, she began to write to Ursula, asking her to come.

Casimir and Ursula finally decided to go for a visit and liked America so much that they decided to immigrate in 1994.  They are are hoping that their children and grandchildren will also be able to come over and live at some point.

In the meantime, Casimir decided to try to get a job at a bakery again and was successful at getting hired at a shop on the South Side near Archer and Sacramento, near where they lived.  Unfortunately, however, he became the victim of a crime one night, which changed his whole life completely.

Casimir had just finished his shift and left work at 3:00 am, as was usual for him, and began to walk home.  Suddenly, he was approached by a gang of five or six men who attempted to mug him.  Casimir called for help, so the men beat and kicked him into unconsciousness.  They then put him in a car and drove to a forest preserve, where they dumped his body and left him for dead.  He was found by the police the next day and was rushed to the hospital.

Meanwhile, Ursula was in a panic because Casimir had not come home.  She called the Polish Alliance, who called the police.  Eventually, after three long days, she discovered that he had been admitted to Christ Hospital in Oak Lawn.  Casimir remained there for over six weeks, trying to recover from a severe brain injury.  Ursula enlisted the help of a friend of a friend from the Polish Alliance, George Gorski, who stepped in to help the Winogrodzkis navigate the medical system and to help make arrangements.

When Casimir was well enough to be released from the hospital, George and the discharge staff convinced Ursula to put Casimir in a nursing home until he could hopefully regain some strength and memory.   After only a few weeks in that facility, however, George recommended moving him to a nursing home on the North Side of Chicago, which had predominantly Polish and Czech residents and staff, hoping it would help Casimir’s memory.  Ursula reluctantly agreed, though this made visiting him very difficult, as their apartment was on the South Side.  To solve the problem, she decided to move herself and her aging mother to the North Side to be closer to the facility.  She is now able to visit him daily and even brings him home with her on the weekends.

Casimir has made a relatively smooth transition to this current nursing home and seems to be making progress mentally each week.  He says he is no longer angry at his attackers and has forgiven them, though he suspects that Ursula has not.  Casimir says he likes it at the nursing home and enjoys talking with the other Polish residents.  Because he is considerably younger than them, he enjoys doing little favors for them and helps transport them to the various activities offered by the home.