It Was Her Job to Care for the “Waterhead Babies” 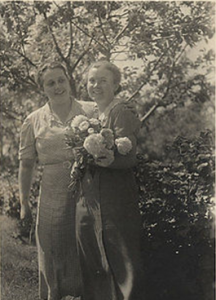 Rose Ackermann was born in Chicago on August 22, 1926 to Emil Ackermann and Hanna Raskop, both of whom emigrated from Germany.  Emil found work as a coal and ice man, but he also worked as a handyman on the side sometimes as well.  Hanna cared for their three children—Leo, Judith and Rose—and worked at the Baby Ruth candy bar factory at night.

When Rose was just three years old, she came down with either diphtheria or scarlet fever, which left her with brain damage.  Judith, her older sister, says she was never the same after that.  Rose never learned to read or write, except her name, and never learned to even make change.

More tragedy then followed for the Ackermann’s.  When Rose was nine and Judith just ten, Hanna died, leaving them in the care of Emil, who, according to Judith, was an “abusive drunk.”  As the oldest girl, Judith was expected to fill her mother’s shoes and struggled to learn to cook, clean and do the laundry.  She says she was routinely beaten by her father for not doing things correctly, and she often took Rose’s beatings as well, as Rose could never remember to do her chores.

The authorities somehow got wind of the situation and eventually came in and broke up the family.  Judith was sent to a foster home to live.  Leo was also slated to go to a foster home, but ran way instead and raised himself on the streets from the age of twelve.

Meanwhile, poor Rose got sent to a home for “deformed children” in Dixon, Illinois.  At the home it was Rose’s job to wash and feed the “waterhead babies” every morning before she received her own breakfast.  Rose often tells about the scary room at the institution with rows and rows of shelves upon which sat jars filled with the brains of the waterhead babies who had died.  Needless to say, Rose was almost perpetually terrified.  As she grew older, she had to look after more and more children, including children whose only problem was epilepsy.  It was a difficult task considering her limited mental ability, and she found it hard to keep after them.

Rose remained at the home until she turned eighteen and was finally free to go.  Judith came and got her.  It was 1944, and Judith had just gotten married.  She brought Rose to live with her and her new husband, Michael Reading, on Kolmar Avenue in Chicago.

Rose spent the next fifty years living with Judith and Michael.  She never married and has always been a very calm, even-keeled person, says Judith.  She loves dogs, solitaire, doing hook rugs, cleaning the house, listening to ball games on the radio, and watching soap operas.  Judith and Michael never had any children, so when Michael died a few years ago, Judith and Rose were left alone.  They have always been extremely close, as if perpetually trying to make up for the lost years of their childhood, and they did everything together.

Recently, though, Rose began experiencing stomach pain and was having difficulty breathing, so Judith took her to the hospital.  Her diagnosis is still not clear, but the doctors recommended that she be admitted to a nursing home.  Judith agreed, but with much guilt and a heavy heart.  Ironically, Rose seems content with her placement.  It is Judith, who visits often, that seems to be having a harder time adjusting and is very critical of the facility as a result.  Rose is alert and can communicate well, but has difficulty answering questions.  She does not interact with the other residents, as her conversation skills are limited, but seems to enjoy sitting among them  and listening.