She Was Jane Russell’s Manicurist 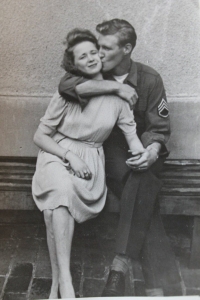 Hazel Reuter was born on May 17, 1920 in Chicago to Douglas Wilson and Eileen Brady, who were of Scottish and Irish descent, respectively.  Douglas worked in the produce business, and Eileen cared for their five children:  Vernon, Victor, Hazel, Gerald and Jane.  Sadly, however, both Vernon and Victor died as toddlers in the flu epidemic.  Then, when Hazel was just ten years old, Eileen died at age 36 of stomach cancer.

According to Hazel, Eileen had been a very beautiful woman, and her father had adored her.  When she died, he fell apart and could not take care of the three children that remained.  Eventually, he arranged for relatives to take them in.  Hazel went to Eileen’s sister and Gerald and Jane went to Eileen’s mother.  Tragically, though, Gerald died just three years later, in 1933, of a brain tumor, which plunged the family into grief all over again.

Finally, at some point, Douglas pulled himself together enough to get a little apartment on Hudson Avenue in Lincoln Park in an attempt to make a home for Hazel and Jane, his only surviving children.  Hazel says it was very nice for a time, just the three of them, that is until Douglas remarried.  After that, Hazel says, the atmosphere in the home became tense and abusive.  The situation with her new stepmother grew so bad that one night, in desperation, Hazel, aged 17, packed a grocery bag full of clothes and left the house.  She went to her grandmother’s home at Ravenswood and Irving Park Road and asked if she could stay with her.  Her grandmother of course took her in, and Hazel quickly got a job at a toy factory – one of the many factories in the area.

Jane soon followed Hazel to live with their grandmother and got a job as a housemaid for a wealthy family living on Lake Shore Drive.  Jane married young at age nineteen, and over the years, she and Hazel have lost contact, though Hazel does not say why.

In 1945, when Hazel was twenty-five, she met a young soldier, Benjamin Reuter, who was home on leave.  They met at the Aragon Ballroom, and Hazel agreed to write to him while he was away.  As soon as Benjamin was discharged from the army, the two were married.

It was a difficult marriage, however, in that Benjamin was of Russian Jewish descent, and his family ostracized them because Hazel was Christian.  Only Benjamin’s mother would occasionally speak to Hazel.  Likewise, Hazel had very little contact with her own family, so they were very much on their own.   Benjamin found work as a cab driver, and Hazel cared for their baby, Marian, in a tiny, one-room apartment.  Eventually, their financial situation improved with Hazel working part-time in various factories, and they moved to a bigger apartment.

When Marian was nine, Hazel and Benjamin had another baby, Charlie, followed quickly by Pearl.  At this point, the marriage seemed to break down, with Hazel and Benjamin eventually separating.  Both Charlie and Pearl, Hazel says, have few memories of their father.  Hazel began then to work as a manicurist and eventually found a job at an exclusive salon that catered to the “rich and famous.”  Hazel is very proud of the fact that she gave Jane Russell her manicures on a regular basis.  After many years of this, however, the stress apparently got to her and she quit.

It was at this time that Benjamin, estranged from them all these years, was diagnosed with leukemia.  In April of 1970, he came back home to Hazel to die.  Remarkably, Hazel diligently nursed him for two months until he passed away in June of that same year.  Charlie and Pearl were teenagers at the time.  Marian, on the other hand, had already moved out by then and was married to “an Arab who controls her,” according to Hazel.   Eventually, Pearl married, too, and moved to Missouri.  Only Charlie remained with his mother.

In 1974, Hazel had two heart attacks and spent thirty days in the hospital.  She eventually went back home and recovered and spent much of her time trying to help Charlie, who appears to be somewhat unstable, both mentally and emotionally, with his many issues.  Besides taking care of Charlie, Hazel’s favorite pastimes were cooking and walking to thrift stores.

Around 1985, Hazel’s life took a different turn.  She happened to hear about and attended a prayer meeting led by an “evangelical preacher” who went only by the name of “Farlo.”  Hazel became enraptured with Farlo’s preaching and completely immersed herself in his particular brand of religion, which she refers to as “The Message.”  Hazel now believes that God talks to her and has given her the gifts of speaking in tongues, having full knowledge of the bible, prophesy, reading minds, and the power to heal others by praying over them or touching them.

Recently, Hazel has been experiencing blood-pressure problems and was hospitalized for five days.  Her doctors were not convinced of her ability to go home, even with, or perhaps because of, Charlie being there, so she agreed to go to a nursing home.  Hazel believes, however, that she will heal herself in exactly one month’s time and then be released.  Charlie and appears to be somewhat unstable, mentally and emotionally.seems overwhelmed by his mother’s placement here.  He visits frequently, but rather than offer her encouragement and support, it seems to be the other way around.  Charlie seems very emotionally dependent on Hazel and sits with her for hours, during which time she tries her best to comfort him.

Hazel is not acclimating well to the home, as she views her stay here as temporary.  At times she is very accepting and pleasant with the staff, and at other times she can be verbally abusive.  She seems content to read her bible and pray and to sit quietly with Charlie watching TV.  Though very alert and able to communicate, she does not seem concerned with her medical prognosis nor her plan of care.