Hated by Her Father Because of the Way She Looked 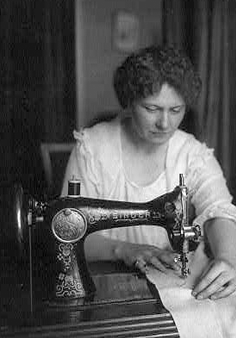 Zuza Gwozdek was born in Poland on March 16, 1908l to Przemo Dunajski and Wojciecha Jagoda, farmers just outside of Warsaw. Zuza was the third of eight children (Ula, Tosia, Zuza, Wanda, Olek, Miron, Stefania and Romana) and had the misfortune of looking almost exactly like Woujciecha’s mother, whom Przemo hated. By the time Zuza was three, Przemo could not stand the sight of her and, having other hungry mouths to feed anyway, sent Zuza away to a Catholic orphanage in Warsaw.

At the orphanage, Zuza received a sketchy education at best and was instead expected to work. When she finally turned eighteen in 1926, she was allowed to leave and “start my life,” as she puts it. Not knowing what to do, however, she decided to travel to another city where she had a friend, Renata, who had been in the orphanage with her. Renata welcomed Zuza with open arms and allowed her to stay with her. Not long after she moved in, however, their apartment was broken into while the girls were out for a walk, and all of Zuza’s few possessions were stolen. The robbery hit Zuza very hard, and she became depressed and withdrawn. Renata, in an attempt to cheer her up, decided to have a party and invited some friends over. It was then that Zuza was introduced to a young man by the name of Ludwik Gwozdek, who seemed very attracted to her.

Despite the party and the possibility of a romance, Zuza remained depressed. In fact, one day she found herself on a bridge overlooking the river near Renata’s flat. She contemplated jumping, but a voice told her “Don’t jump. Your life will be okay.” For Zuza it was a profound moment and the beginning of what she describes as her spiritual life. She felt overwhelmed that someone above was watching over her, that someone actually cared for her for the first time in her life. Zuza climbed down off the ledge and married Ludwik shortly thereafter.

The young couple at first lived with Ludwik’s family and tried to find work where they could, but the marriage, even then, was not a smooth one. When the war began and Germany invaded Poland, Zuza and Ludwik were separated and sent to different work camps. Zuza was forced to work in a factory until the war’s end.

In 1945, Zuza was released from the work camp. Both Renata and Ludwik were gone, as was his family, and Zuza didn’t know what to do. Alone and very ill, she decided to walk all the way back to her parents’ farm, hoping that they might still be there. Zuza was overjoyed to find that at least her parents were still alive, but she did not receive the happy welcome she had hoped for. Her father told her that she could stay at the farm if she could pay for her upkeep. The only thing she had of any value was a beautiful babushka, which she handed over to him to be sold. Her father, however, rather than selling it for money, instead gave the babushka to her sister, Tosia, as a gift.

Heartbroken yet again, Zuza left the farm and sought refuge from some neighbors. They allowed her to stay for a short time and then suggested she go to Warsaw and try to find work there. They gave her extra food and clothes and some cigarettes to sell to help get her started. Zuza eventually made it back to Warsaw and, through a strange turn of events, was reunited with her husband, Ludwik. At first Zuza was happy that he was still alive, but she soon began to regret it. Ludwik had changed during the war. He had once been loving and kind, but he was now short-tempered and even brutal. He frequently beat Zuza and “abused” her in other ways. He seemed unable to hold a job for any length of time, forcing the couple to move from city to city constantly, looking for work, towing their first child, Karol, along behind them. After thirteen years of this, they eventually settled down in Dansk and had another child, Ada. Zuza saved and saved until she had enough money to buy a sewing machine so that she could make extra money. She would also walk every morning to the countryside, buy cheap fruit and vegetables and then walk back and sell them in the city for a small profit.

Meanwhile, her marriage with Ludwik grew worse, and he became even more violent. One night, the fighting was so bad that the neighbors called the police. This incident, plus the fact that Karol and Ada were always nervous and fearful, pushed Zuza into leaving Ludwik. At first she was afraid that he would come after them, but he did not. At this point, Zuza had a growing reputation as a skilled seamstress. So between her work as a seamstress and working at the local orphanage, which was very dear to her heart given her own childhood, she was able to scrape out a meager existence.

Karol eventually married a woman named Maria and had a child, Leo, with her. Not long after Leo was born, Karol immigrated to America. He worked there for eight years to save up enough to send for Maria and Leo, as well as for Zuza and Ada. For a while they all lived together in an apartment in Chicago, but Karol and Maria started to have marital problems. Karol decided to move his little family to Texas for a fresh start, but Ada and Zuza remained in Chicago, where Zuza found work as a seamstress in a factory to support Ada and to put her through high school.

Ada eventually married, too, but moved to the south side to be near her husband’s family. Zuza lived alone for many years, then, until she eventually retired at age seventy. When she announced that she was quitting, her boss threw her a little party and reportedly told everyone that he was going to have to hire two people to replace her. Zuza is very proud of this and frequently repeats it. Even in retirement, Zuza continued to sew, often making clothes for her grandchildren. Her favorite thing to do was to watch TV and movies to observe the clothes the actors wore and would then try to imagine how she would go about making them.

Zuza lived independently until 1996, when she began to fall repeatedly. Karol was very worried about her, but he was sadly preoccupied with his wife’s diagnosis of cancer and impending death. Also concerned, Ada decided to have Zuza come and live with her.  It proved to be too difficult for Ada, however, as she spent fourteen years caring for her father-in-law before he passed away.  The thought of starting all over again as the primary caregiver for yet another elderly person was too much for Ada.  So, all things considered, Ada and Karol decided to put Zuza in a nursing home, though they were very weighed down by guilt.

Zuza, it turns out, has made a relatively smooth transition to her new home.  She is very alert and able to carry on conversations.  She enjoys the Polish food and music and talking to other residents, though she sometimes has bouts of melancholia. It is fitting, she says, that she has to start all over yet again. She feels that she has never really fit in anywhere and has spent most of her life moving. “I’ve lived among strangers all my life,” she says. “This isn’t so different.”