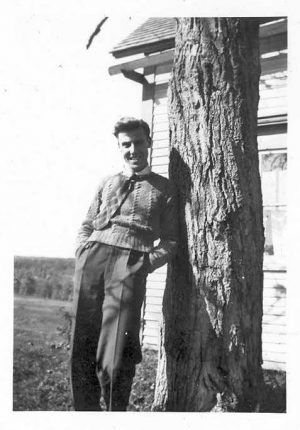 Clement Rybar was born on February 6, 1915 in Slovakia to Jonas Rybar and Alena Kriz.  Jonas owned a substantial farm, and even though he and Alena had seven children to help, they still needed to hire extra workers to get all of the work done.  Clement went to school until about the six grade, enough to learn to read and write, and then quit.  He helped his father on the farm for a number of years before serving in the Slovak army for four years.  When he was eventually released, he began working as a mechanic, a skill he had learned in the army, in the town of Bratislava, which was much bigger than the village he had grown up near.

He worked long hours and did not have time for hobbies.  On his one day off a week, Sunday, he enjoyed walking in the city’s many parks.  It was on one of these walks, that Clement one day spotted a lovely young woman sitting on a bench.  Captivated, he got up the courage to go over and introduce himself.  The young woman’s name was Renata Strnad, and she agreed to walk with him the following week.  The two of them began meeting regularly each Sunday for many months until Clement one day took her hand and asked her to marry him.  Renata said yes, and after a short engagement, they married.

Unfortunately, Clement and Renata did not have a very happy marriage, though Clement does not say why.  They eventually divorced despite having four children.  Clement does not elaborate on the years following his divorce except to say that in 1969, he could no longer stand living under a Communist government and decided to immigrate to America.  He ended up in Cleveland, Ohio, where he found work in a restaurant.  Soon after, he found a different job in a clothing factory, where he worked for three years before getting a job as a milling operator.  He says he had a large group of friends and that he enjoyed dancing, reading, and going out to hear music.  He says that he can speak Slovakian, Serbian, Russian, and Polish and that he has traveled to every country in Europe, hence his ability to make friends easily.

Clement eventually met and married a new woman, Nancy Klimich, whom he met through friends.  After only a few years, however, she tragically died in a car accident, spiraling Clement into grief.  Shortly after her death, Clement was also involved in an accident at work, which resulted in him losing two fingers.  He eventually recovered, but he was let go because he could no longer adequately perform his job.  Not wanting to give up working, he started his own remodeling business and actually became quite successful at it.

Meanwhile, Clement says he was very lonely and craved a wife.  “I’m no Robinson Crusoe,” he said.  “I don’t like to be alone.  I like to be with people; I crave companionship.”  Not being able to find anyone in Ohio, he started taking out “inter-country personal ads” to try to find a wife and says he went to Yugoslavia over twenty times to meet potential women.  Unfortunately, they all turned out to be impoverished, homeless or worse.  Besides this desire for companionship, however, Clement says he was anxious to find someone to marry so that he could leave his assets to a new wife instead of everything going to his first wife, whom he assumed was still living somewhere in Slovakia.  He resolved at the time that if he couldn’t find anyone to leave his money to, he would give it all to the Red Cross rather than have his first wife and his children “snatch it up.”

Clement’s situation changed, however, in 1989 with the fall of Communism in Czechoslovakia.  After that, Clement says that the Czech government began sending out propaganda to all the ex-pats, inviting them to come back to Czechoslovakia and start over.  It was enough to convince Clement, and he sold everything he owned here and moved back to Czechoslovakia.  There he invested the equivalent of 120,000 US dollars in a building company that promised to build him a brand new house on a large tract of land.  Clement waited for over six years for work to begin on his house.  Finally, fed up and desperate, he took them to court.  Shortly after the case began, however, he says he was attacked by two men while walking down the street.  He was beaten and put on a plane bound for Chicago.  He has no proof, but he is convinced the attack was somehow connected to the building company that he was attempting to sue and is sure that these same people have meanwhile confiscated his property and money.

After landing at O’Hare, agitated, beaten, and distraught, he was taken to a hospital and diagnosed with depression and “abnormal behavior.”  Clement says he “went a little wild” because no one could understand what he was saying.  He was eventually transferred to a nursing home, which he says he hated because it was dirty and all of the residents were old and sick.  Clement demanded that they allow him to go back to Ohio, saying that he had many friends there who would “take him in.”  The administrator of the nursing home reports that he was able to contact some of these people, though most were deceased.  The ones that he did manage to find, however, were either too ill themselves to care for Clement or simply unwilling to take him in.  Finally, unable to deal with Clement’s demands and horrible mood swings, the nursing home sent him back to the hospital.  The hospital discharge staff then sent him to a different nursing home, this one with a high number of Czech residents and staff, in hopes that Clement would be happier.

Clement does indeed seem to be content and is making a very smooth transition to his current facility.  He has, for the most part, given up the notion of going back to live in Ohio, but he tells the same story over and over to anyone who will listen about how he was cheated and robbed in Czechoslovakia.   He is now asking the staff to contact the Czech Daily Herald to come and interview him about what happened in the hopes that someone out there in the Czech community will be able to help him get his money back.

Meanwhile, he enjoys the food and activities at the home and especially enjoys being around the other residents.  He is almost never to be found in his room and is always out doing something.  Clement appears to be alert and aware, but it is impossible to determine how much of his story is fact or fiction.  The administrator of the previous nursing home also reports that not only did he spend many months trying to contact Clement’s friends in Ohio, but he likewise attempted to investigate the mysterious building company in Czechoslovakia, the companies Clement worked for in Ohio, his first wife and children in Slovakia, and any remains of his second wife’s family.  Oddly, he was not able to trace any part of Clement’s supposed history.  At one point, Clement told the staff of his current nursing home that he and Renata never had any children and that she died of cancer nine years into their marriage.  Later, he retracted that story and sad that she and his four children are alive and well in Slovakia.

Except for the distress he seems to experience when telling his same story over and over, Clement seems to be happy and content.