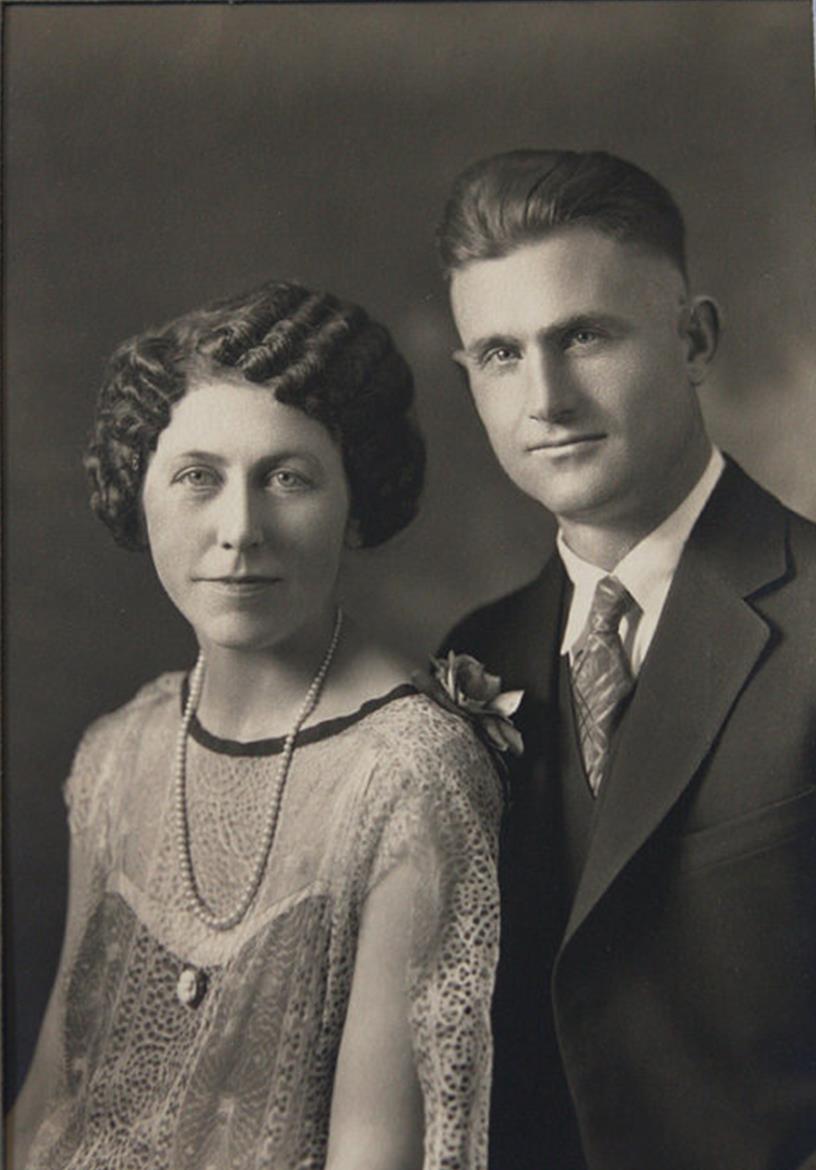 Jonas “John” Dusek was born on January 3, 1913 to Adolf Dusek and Valerie Janota, both Czechoslovakian immigrants who came to Chicago in 1908.  Adolf worked as a cabinet maker, and Valerie cared for their three children: Tania, Josef, and John.  When she was just thirty-one, however, Valerie died giving birth to what would have been their fourth child, who also died.  John was only three years old when his mother passed away, though Adolf soon remarried.  Actually, John says, his father had a total of five wives and outlived them all!  In fact, he died coming home from a girlfriend’s house on Christmas Eve, 1967, aged eighty-seven!

John and his two older siblings grew up in Chicago and completed high school. John worked as a cabinetmaker with his father and also as a machinist. In his free time, he liked to hang around his cousin, Al, and another friend, Tony.  One day, Al told John and Tony where they could get some good free food.  John, who says he was permanently hungry growing up, agreed to go with Al to what he expected was going to be some choice garbage cans in back of a restaurant.  He was surprised, then, when his cousin drove them to a farm in Riverdale, Illinois.

Unbeknownst to John and Tony, Al had gotten a job picking up produce from farms and driving it into the city where the owner of the truck sold the produce at a market.  Al had become friendly with many of the farmers, many of whom told Al that he could take as much damaged fruit or vegetables as he wanted.  Delighted with Al’s explanation, John quickly got out of the truck.  But before he even took a step, he spotted a beautiful young woman on the second step of the farm house, watching them.  John took one look at her and knew that she was going to be “his girl.”  Her name was Emily “Em” Longton, and they married six months later on November 21, 1936.

John and Em got a little place in Chicago, and over the course of their lives moved about between Cicero, Lisle, Berwyn, and finally ended up in Algonquin. They had one child, Edward, who was born on October 30, 1937.  John had a variety of jobs over the years besides being a cabinetmaker and a machinist. He worked for Diamond J trucks as an inspector and then for Harvester and also at one point owned two taverns—the Tree Gables in Lisle and then the Court Inn in Cicero.

His favorite “occupation,” though, was playing saxophone, clarinet and piano in a local band called Guy Pakee’s Orchestra. They even made a few records, of which John is extremely proud. John feels they had a great life together, he and Em, and when they retired (Em worked on and off at the Time Life building downtown as a secretary), they decided to travel. They went to Europe, Alaska and even to Hawaii, and traveling became a great love of John’s.

Their traveling days ended, however when Em died unexpectedly of emphysema.  Em’s death hit John very hard, and not long after, he began experiencing “forgetful spells.”  Only months after Em’s death, John was often found wandering the neighborhood, lost and unable to navigate back to the house.  The neighbors finally decided to call John’s son, Ed, who was living in Ohio.  Ed came home and, shocked by how quickly his dad had deteriorated since Em’s death, started flying in every weekend to check on John.  Ed eventually persuaded John to go to a doctor, who sadly diagnosed him with early Alzheimer’s. Distraught and not knowing what else to do, Ed arranged for his father to be admitted to a nursing home. According to Ed, John agreed to this move, but now at the nursing home, John is frustrated and upset and wants to go home.

As a way to deal with his anxiety, John often makes jokes with the staff, but at other times, he can be found wandering the halls, desperately asking the staff if they have seen Em. When they gently tell him that she is deceased, he bursts into tears, as if hearing the sad news for the first time all over again.

The most heartbreaking part of John’s condition is that he has moments of lucidity in which he seems to realize his condition, reporting to staff that “I can’t think straight” or often says “I’m losing my mind.”  He blames his forgetfulness on a “pinched nerve” in his neck, which he says the doctors can do nothing about.

Now when John anxiously asks the staff where Em is, they simply tell him that she has gone out to the store, which seems to pacify him for a little while. He passes the time, waiting for her, in his room, listening to his Guy Pakee records on a little phonograph he has brought with him from home or by looking at the scrapbooks of “history and geography” he has made over the years from newspaper clippings.  He reports that these things help his memory.  Occasionally he will interact with other residents, but his mood changes rapidly and he often leaves the group.  Still, he seems to be trying very hard in his own way to make the best of his situation.