She Imagined Her Husband Had a Girlfriend Named “Bubbles.” 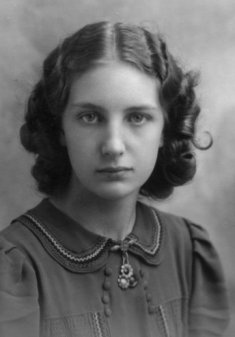 Fanny Jones was born on May 19, 1926 in Kentucky on a farm.  Her parents, Ike and Gertie Stores, had seven children, but not much is known about them except that they were of German and Irish descent and were strict Pentecostals.  Fanny apparently received a very sketchy education and, according to her granddaughter, Elizabeth, is “basically illiterate.”

Fanny married her childhood sweetheart, Frankie Jones, who used to tells stories about Fanny throwing rocks at him if he ever walked another girl home from school.  Frankie and Fanny moved to Chicago four years after their wedding and both got jobs at the Holloway Candy Company making Milk Duds.  Fanny had several miscarriages before she gave birth to a little boy, John, who died shortly thereafter.  Fanny kept trying, however, and eventually had four children: Maggie, Melvin, Elvin, and Kelvin.  Fanny has always referred to Melvin as “poor ole Melvin,” though no one knows why.  He died years later while on leave from the Vietnam War.

According to Elizabeth, Maggie’s daughter, Fanny and Frankie lived a very sheltered life, adhering to their Pentecostal faith and sticking to a strict routine.  They went to work and came home – Frankie tending the garden and Fanny sewing (her great love in life) and cooking, which she hated, but did because she had to.  As soon as Maggie was old enough, however, Fanny made her do it.

Elizabeth relates that her mother, Maggie, and Fanny never really got along.  In fact, she says, Fanny frequently told Maggie that if she could make her into a boy, she would, which, of course, hurt Maggie terribly.  Elizabeth says that from the stories she has heard, the family was very dysfunctional, constantly fighting, the prime instigator being Fanny herself.  Fanny, Elizabeth says, liked to make trouble and has always been very stubborn and interrogative.  “Her way has always been the right way, and there is no other.”

Frankie seems to have been “everything” to Fanny, and yet she was extremely jealous and suspicious of him, so much so that she created an imaginary girlfriend for him, “Bubbles,” whom she routinely accused him of having an affair with.  Periodically Fanny would even spend the money to follow him to work in a cab to spy on him.  She kept a deadbolt on her bedroom door for years and has always felt that “everyone is after my things.”

Elizabeth says that while she loves her grandmother and would do anything for her, she is a very hurtful, vindictive, paranoid person.  Elizabeth doubts if Fanny is conscious of it because she has hurt so many people over the years and doesn’t seem to understand how she has alienated them.  She loves attention and has always insisted on being deferred to.  She was “babied and spoiled” by Frankie who “groveled” before her to prevent her from becoming angry and yelling.  She has always “pretended to be sick” and also pretends, Elizabeth says, to be sleeping so that she can listen in on conversations around her.

Fanny has always complained that she has had “the worst life.”  After working at the Holloway Candy Company for twenty years, Fanny slipped on a puddle and was injured and claimed to not be able to work anymore.  Apparently, Frankie and Fanny had no hobbies and never saw a movie in their life.  They enjoyed taking rides in their car, looking at houses they passed, but never went on a vacation except for a few trips back to Kentucky.  After Melvin died, however, Fanny developed an aversion to their home town in Kentucky and only returned one or two more times after that.  In fact, Elizabeth says, there is a little cemetery back in their home town which is full of Joneses.  There lies Melvin with two empty plots beside him for Frankie and Fanny when they pass.  Fanny, however, refuses to be buried there and claims that if she is, she will come back and haunt the family forever.

Fanny and Frankie have lived in the same two-flat in Chicago on Sunnyside for over forty years.  In the last few years, however, they have begun to decline, so Maggie moved into the upstairs apartment to be closer to them and to help them.  Elizabeth has long complained about her mother living there, saying that she is a slave to her grandparents and that she does “everything for them.”  What makes it even worse, Elizabeth says, is that her mother is “emotionally dead” to Fanny because of all the abuse she’s taken from her over the years.  Elizabeth has been trying to get her mother to put Fanny and Frankie in a nursing home for years, but Maggie refuses to.  Elizabeth feels that her grandmother’s health in particular has really deteriorated, though it is hard to tell because Fanny “fakes it so much.”  Fanny’s abuse of Frankie has increased over time as well, including a resurrection of the Bubbles story, all of which has been hard for him to deal with on top of his own health problems.

Recently Fanny was hospitalized because of three minor amputations she had to have due to diabetic complications.  It was after these hospitalizations that the discharge staff was finally able to convince Maggie to put Fanny in a home where she could get the proper care.  Maggie admitted that she can no longer cope with the situation and agreed, though she is still having a lot of guilt.

As predicted, Fanny’s transition to the facility has not been smooth.  She seems lethargic and disoriented at times, yet at others times, she is agitated and constantly calls out for a nurse.  Maggie doesn’t visit often as it seems to make Fanny combative, so Elizabeth is trying her best to do so, though she finds it hard to have patience with her stubborn grandmother.