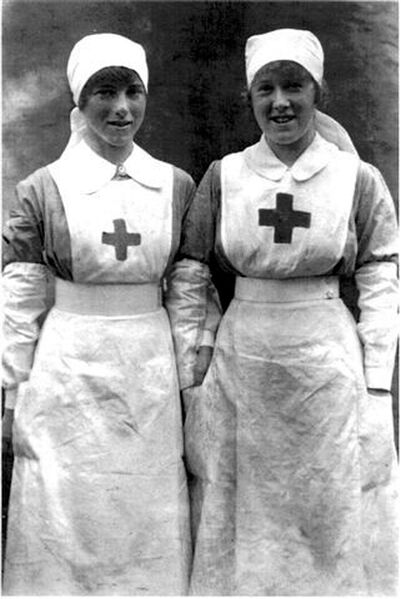 Sara Arnold was born on January 27, 1900 to Vladan Medved and Terezia Novak in Zariecie, Slovakia. Vlad and Terezia immigrated to the United States in 1904 and settled in the Pilsen area of Chicago.  Vlad found a job as a machine operator at Western Shade Co. and worked there until he died in 1925, whereupon, as a tribute to him, Western Shade shut down Vlad’s machine and draped it in a black cloth for one whole day, a testimony to his hard work and ingenuity.  Terezia was left to care for their nine children: Vincent, Sara, Tomas, Stefan, Petra, Silvester, Rozalia, Olga, and Robert.  After Vlad died, most of them were forced to quit school to find work.

As one of the older children in the family, Sara left school after 8th grade and went live with a family friend, Mrs. Mickelson, where she got a job in the Loop at Western Union. Sara was a very independent, spirited young woman, involving herself in the temperance movement as well as the Red Cross during WWI. She wrapped bandages, sold war bonds door-to-door, and practiced marching in Grant Park with her fellow trainees in preparation for their planned trip to France to aid the soldiers there. The war ended, however, before they got a chance to go, and while they were overjoyed, of course, that the “boys were coming home,” there was a distinct feeling of disappointment that their adventure had been thwarted.

Not long after the war ended, Sara was walking home from work one day and passed down Jefferson Avenue where she saw a group of young men playing baseball in the street. One of them stopped playing and came over to talk with her. His name was William Laska, and he later became Sara’s husband on October 16, 1916. Sara was just 16 years old; William was twenty.

William worked as a truck driver with the Teamsters and did not approve of Sara working, so she stayed home and raised their four children: Susan, Rose, Evelyn and Martin.  She also had twins, Peter and Paul, who died after only 6 hours of life. According to her children, Sara enjoyed her life as a housewife and cooked, baked and sewed everything from scratch.  She even made her own beer, though she was very opposed to liquor!  She was a woman, her children recount, who was “absolutely full of life.”

Every summer she and the children would pack up the car and traveled north of the city to the little village of Wauconda, where they had a summer cottage on the lake. Sara loved to fish, garden and read. She was a very intelligent woman and was very strong, and though she was in many accidents over the years, her children say that she never cried, complained or babied herself. They have many stories of Sara’s “misfortunes” over the years, including the time she was trapped in a burning car, the time she got her arm caught and mangled in a wringer, the time she stepped on a sickle and slashed her leg, the time she stepped on a rusty nail in Wauconda and drove herself to Chicago with a ballooned foot, the time she dug a fish hook out of her thumb, the time she split her finger open with an electrical saw, her various mild heart attacks, and the time she had her cancerous uterus removed. In all of these situations, her children recount, Sara remained calm and cool. Her attitude is typified in a statement she made before her hysterectomy. “If it’s God’s will, I’ll make it; if it’s not, then I won’t!”

She was strong, too, when her husband, William, died in 1943 at age 47 of one of his “spells.” Afterwards, Sara lived alone with the children until 1950 when she married Augustus “Gus” Aronold, a radio and T.V. repairman, though they only had 8 years together before he died, too.

After Gus’s death, Sara lived alone in the apartment above her daughter, Susan.  She sold real estate for a short time and also worked as a cashier in a department store for a year or two, but mostly she seemed to enjoy being at home. She and her friends formed the “Fat Ladies Club,” which consisted of them going to each other’s homes to eat and play Bunco. She was very handy and could repair many things around the house and loved to paint and wallpaper. She gardened and canned until age 80, as well as baked and cooked. Whenever someone in the neighborhood died, Sara would bake hundreds of kolaches for the family. She was a very kind person, say her children, and she loved life, making it all the harder for them to place her in a nursing home at age 96 after she suffered a stroke. She is no longer able to speak, but her children speak for her, one of them always remaining by her side except to sleep at night, a beautiful testimony to a joyful life lived for others.