“I’d Take Those Days Back in a Second” 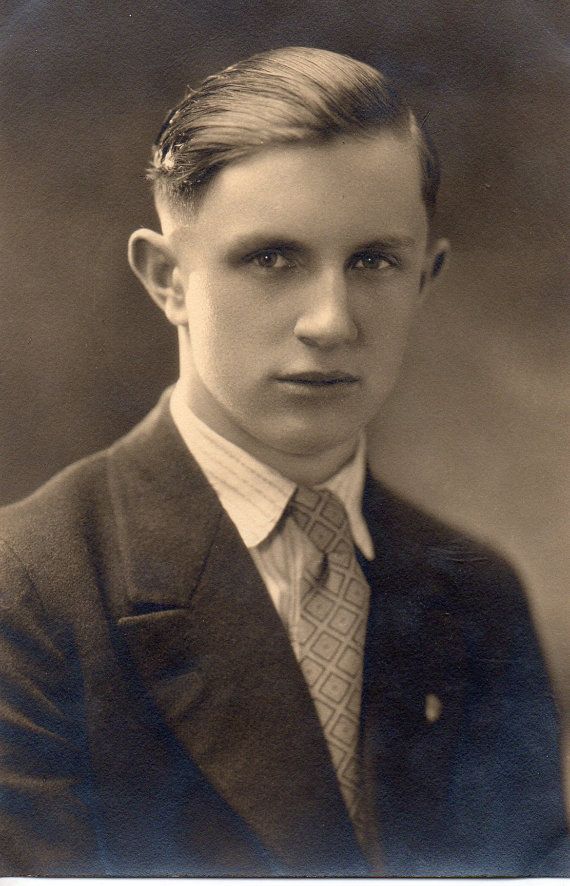 Louis Dubois was born on March 6, 1913 in Chicago to Louis Dubois Sr. and Hilda Kempf.  Both of Louis’s parents were also born in Chicago, though his father’s family had emigrated from France, and his mother’s family was an Irish-German mix.  Louis Dubois Sr. was a star salesman for Armour Foods & Co., and the family lived on the south side near Comiskey Park.  When Louis was just three years old, Hilda had another baby, William, but she died during childbirth.  Louis isn’t sure, but he thinks his mother was probably only in her early twenties when she died.  Louis Sr. began drinking heavily as a result, and Hilda’s mother had to step in to help raise Louis and Will.  His father was able to “keep it together,” at work, but he became “a drunken idiot” at home each night.  In that way, it was good that his grandmother frequently cared for them, but she was a “strict, hard woman,” Louis says.

Like so many others, the Dubois family was hit very hard during the Depression.  Louis and Will would routinely walk along the railroad tracks and pick up stray bits of coal to help heat the house.  They were terribly poor, Louis says, but he would “take back those days in a second.”  Louis went to high school and eventually found work as a quality control clerk at Mills Novelty, a world leader in jukebox technology.  He had a few hobbies, such as going to movies or watching sports, but mostly, he says, he just worked.

When he was twenty-eight, he met a young woman, Betty Rose, who was a waitress in a little diner he often frequented.  Though she was only seventeen, he asked her out on a date to the movies, and they eventually started seeing more of each other.  When Hilda turned eighteen, they got married.  Unfortunately, Betty miscarried their first child and had to have a hysterectomy immediately following, so she and Louis never had any children.  Betty continued waitressing over the years and sometimes cleaned offices at night.  They weren’t particularly affectionate, Louis says, but he loved her, and he thought she loved him.  “We made a go of it,” he says, and he still can’t understand why, after twenty years of marriage, Betty filed for divorce.  “I guess she just went a little crazy.”  When asked if the divorce was hard on him, he says, “No, not really.  Well, a little bit.”

Louis describes himself as a loner and that he did not make many friends.  His coworkers, he reports, always called him “negative.”  His closest friend over the years was his brother, Will, who also divorced later in life and who also had no children.  When Will died three years ago, Louis was left very much alone and took his death hard.  “Our whole family died out,” he adds, sadly. “If you have friends today, you’re lucky.”

Louis has always been incredibly healthy, though he has been smoking for sixty years.  He worked in a quality control position into his eighties and just recently had to quit his job at Cushing and Co., at age 83, after being diagnosed with terminal lung cancer.  He explains that he went to the doctor for a routine check-up and was told he doesn’t have much longer to live.  He does not seem to want to acknowledge or talk about his terminal illness.  When asked if he is sad or upset, his response is “No, not really.  Well, a little bit.  I wish I was at work.”  After a short stay in the hospital, he was admitted to a nursing home, which he helped to choose.

Louis is making a relatively smooth transition, but he does not seem to be bothered by much.  He appears withdrawn and depressed most of the time despite his comments otherwise.  “I’ve had a boring life,” he says.  “All I did was go to work, come home and watch TV and then go to bed.”

His favorite thing to do seems to be talking about “the good ole days,” as he calls them.  He is thoroughly disgusted with modern society and longs for the days when people knew their neighbors and smiled at people on the streets.  “No one locked their doors back then,” he says.  “In the summer time, we all slept on the beach for the breeze, and no one murdered you.”

He seems aware of his negativity, saying “no one wants to talk to me because I’m depressing,” but likewise doesn’t seem to be able to control it.  He says he wants to die and “get it over with.”  Staff at the home are attempting to connect him with other residents who might also like to talk or to watch sports on TV with him.