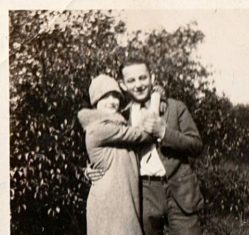 Boris Jankovic was born on June 24, 1906 in Chicago to Andrej Jankovic and Dora Babic, both immigrants from Yugoslavia, though they grew up on neighboring farms in Ohio.  When she was seventeen, Dora married a man by the name William Utzmann and had a baby boy, Adam, the following year.  When Adam was just a year old, however, William was killed in a farm accident.  Dora then turned to her childhood friend, Andrej, and they soon became engaged to be married.

After they were married, Andrej worked on his father’s farm and also as a hired hand, and Dora stayed at home to care for Adam and four more children that came along: Boris, Natalia, Dusan, and Jasna.  At some point, however, Andrej and Dora made the decision to move to Chicago to try to make a better living.  Andrej found work as a janitor at a college, and Dora began cleaning offices at night.

Boris went through eighth grade in Ohio, and when the family moved to Chicago, he got a job at a furniture store loading trucks.  He saved every penny, and after eight years, he had enough to buy a little fruit and vegetable market on Division.  His little venture became relatively successful, and even his father, Andrej, sometimes worked for him.

When Boris was twenty-eight, he became acquainted with one of his regular customers, a young woman by the name of Nancy Horvat, who came to the market almost daily, as she was one of twelve siblings and they went through groceries very quickly.  Boris began to look forward to Nancy coming in each day and finally worked up the courage to ask her out.  Nancy, who was very shy, at first said no.  Boris persisted, however, and finally persuaded her to go to see a movie with him.  The two of them hit it off right away, and she and Boris began dating.  Eventually, Boris proposed to her, but Nancy turned him down, saying that she needed to stay home and care for her mother, who was blind and partially paralyzed, as well as her chronically ill sister.

Boris considered the situation and decided to proceed anyway.  He was quite smitten with Nancy and wanted her to be his wife.  His solution was for him to move in with Nancy’s family so that Nancy could still take care of her mother and sister.  Nancy’s father had already passed away and most of her siblings had already moved out, so it was a solution that satisfied everyone.  Boris continued working ceaselessly at the market, and Nancy stayed home to care for the invalids and for her and Boris’s two little girls, Karen and Francine.

Twenty years passed, and eventually Nancy’s sister and mother both died, and the girls married and moved out.  Boris decided he needed a change as well and sold his market in 1952 to a friend.  He wanted to get into the emerging food industry and therefore took a job working at “a drive-in burger joint” while he went to school at night to learn bartending.

Two years later, he put his experience and schooling to use when he bought the Lisle Lounge in Lisle, Illinois in partnership with his sister, Natalia, and her husband, Len.  Boris and Len worked the bar, and Natalia and Nancy ran the kitchen.  Boris and Nancy sold their house in the city and moved to Lisle to be closer to the restaurant.  The Lisle Lounge was apparently a big success.  Boris worked ceaselessly, just as he had at the market, and therefore had little time for hobbies except a bit of gardening and listening to music.  Occasionally, he and Nancy would go dancing, which they both enjoyed.  Boris loved working at the restaurant, and it soon developed a faithful crowd.  Boris had dreams of expanding it, but his partner, Len, was against it.  What began as a discussion eventually evolved into arguments and then finally, a huge fight.  Unable to come to an agreement about the restaurant’s future, they decided sadly to sell it.  Boris tried to buy out Natalia and Len’s share, but he couldn’t come up with the needed money, and Len wouldn’t budge.

After they sold the Lisle Lounge, Boris got a job as a bartender at a new restaurant in Naperville called the Willoway Manor.  He very much enjoyed working there, as he bartended at night and did the restaurant’s yard work during the day.  Eventually, it closed, however, so he then got a job bartending at Sharko’s in Lisle.  He remained there until he was seventy-two when he finally retired.

At that point, Boris and Nancy decided to travel.  They went to Europe and twice to New Zealand.  They also made several trips to Arizona to visit their daughter, Karen, and her family, and to Hawaii, where their daughter, Francine, was living.

Sadly, in 1986, Nancy was diagnosed with ovarian cancer and died within a month.  It was a terrible blow to Boris, who could barely remember life without her.  She had been his best friend.  He began drinking heavily, and his own health began to decline.  Francine and Karen both agreed that something needed to be done, but they disagreed as to what.  Francine was of the opinion that Boris should go to a nursing home, but Karen was adamant that he would never survive in such a place.  Ultimately, Karen won out and flew to Chicago to bring her father back to Arizona to live with her.

Unfortunately, two years after her mother died, Karen’s husband was also diagnosed with cancer, and she found it almost impossible to care for both him and Boris.  Boris, it seems, did not particularly like Arizona, anyway, and wanted to go back to Chicago.  Reluctantly, then, Karen made the arrangements for him to be admitted to the Golden Age Retirement home in Lyons, Illinois.

Boris apparently really enjoyed the Golden Age and made a smooth transition to life there.  Initially, he joined many activities and made several friends.  After six months, however, he became particularly close with a woman named Ida Kovacevic.  Ida soon became his constant companion, which, at first, Boris enjoyed.  She became very possessive of him, though, as time went on, and isolated him from other people as much as she could.  The staff tried to intervene, but they were not completely successful in getting Boris to branch out.  Boris stopped going to activities and social gatherings to spend all of his time with Ida, and his budding new friendships with other residents died off.  This went on for about two or three years, so when Ida suddenly passed away, Boris was left with very few social supports and grew extremely depressed.  For a time, he refused to join any activities, and his appetite was seriously affected.

Right at that time, the ownership of the Golden Age changed hands, and the new owners decided to make it a more independent living facility and made arrangements to transfer all residents who needed assistance to other facilities.  Boris unfortunately fell into this category.  For awhile, several members of the staff, who really loved Boris and wanted him to stay, tried “covering” for him as much as they could, but it soon became obvious that Boris could not exist independently.

Thus, Karen was again contacted, and the decision was made to transfer Boris to the Bohemian Home for the Aged in the city, where it is hoped he will make a smooth transition and that he will enjoy being in a Slavic environment.  So far, Boris is happy that he is served a pilsner every night with his dinner and enjoys hearing old Bohemian songs, some of which he is familiar with from his childhood.  He is a very sweet man and seems eager to start all over yet again.