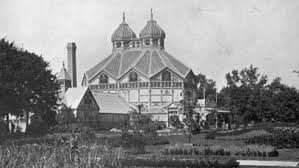 Humboldt Park was a sparsely populated prairie settlement that was annexed into the city of Chicago in 1869. At about that time, visionary Chicago residents began demanding an ambitious park system to serve as the lungs of the city and to help the city to become a great metropolis. The state legislature eventually gave into their demands and created three separate park commissions for the city, the West Park Commission being one of them. This was the first plan for a comprehensive park and boulevard system in America, and the vision was that a unified ribbon of parks and boulevards would encircle the young city. The West Park Commission divided its land up into 3 massive parks: Douglas, Garfield and Humboldt.

Humboldt Park, a 207-acre area on Chicago’s Northwest side was originally called North Park but was later changed to honor a German naturalist and explorer, Baron Freidrich Heinrich Alexander Von Humboldt. It was designed by “the father of the skyscraper,” William Le Baron Jenney, who was hired by the West Park Commission to lay out its entire park system. Jenney had served in the Civil War and had studied engineering in Paris before coming to Chicago to work with Frederick Law Olmsted (New York’s Central Park designer) on the Chicago parks project. Jenney was very influenced by the park and boulevard system he had studied in Paris and sought to recreate it here.

The area set aside for the park began as a flat, desolate marsh, which Jenney dredged and turned into a lagoon. Trees, shrubs, plants and even the grassy lawns had to be added. The park officially opened in 1877 with 20,000 people coming to celebrate. The Chicago Tribune reported that it was the scene of an “outpouring of humanity never before witnessed in Chicago.”

Later, Jens Jensen, the famous Danish landscape designer took over the project, adding his own touches, beginning by turning Jenney’s lagoon into a more natural-looking, prairie-style river. He was also responsible for constructing the Boat House, still Chicago’s most elegant public building designed in a prairie style, complete with a coffee room and a resting room on either side. He also had a music court and band shell built for outdoor concerts and in 1906 tore down a Victorian conservatory and constructed a formal garden on the site.

Another Victorian framed building was taken down in 1928, and the magnificent field house was built on the site. The Stables, built in 1896 in the style of a German country house was originally used for horses and wagons and later contained park offices, including that of Jens Jensen, who later became the park superintendent.

Humboldt Park features several times in the novel, A Girl Like You. In one chapter, the “Viking monument” where Henrietta agrees to meet Inspector Howard is actually a statue of Leif Erikson, donated to Humboldt Park in 1901 by Norwegian citizens. On the day it was dedicated, 50,000 Scandinavians from all over Chicago came to see it’s unveiling.