“His Life Was a Tragedy, and He Doesn’t Even Know It” 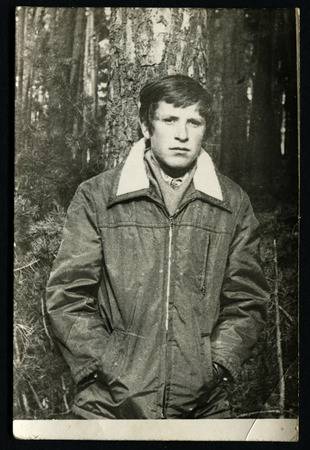 Randy Walsh was born on July 13, 1959 in Chicago to Tim Walsh and Genevieve Sutera.  Tim was of Irish descent, and Genevieve was from a Sicilian family.  Tim and Genevieve both worked for the Burlington Northern railroad, which is how they met.  Tim worked as an engineer, and Genevieve was a secretary in the office.  They eventually married, and Genevieve quit her job to be a house-wife and a mother.  She had five children, but two died at birth and were not given names.  The other three were Jim, Jean and Virginia.

Much later in life, Tim and Genevieve had a fourth child, Randy, but he was not really a welcomed baby, as their three older children were already raised and had subsequently moved out.  Indeed, Genevieve was resentful of having to start all over.  Tim apparently felt the same because when Randy was just three years old, he left the family.

Randy and Genevieve lived alone, then, until Genevieve remarried a man by the name of John Martino.  Together they had one child, Beverly, when Randy was six.  Not long after Beverly was born, however, John left, too.

Beverly believes that her father left because Genevieve was an alcoholic and a drug user.  She is convinced that this is also why Tim, Randy’s father, left, too.  In fact, she says, she is surprised that Tim stuck it out as long as he did and secretly thinks that after Randy was born, Genevieve’s drug and alcohol dependency grew worse.  This and the fact that Randy was diagnosed with epilepsy at age three is what Genevieve believes to have been “the one-two punch” that finally pushed Tim over the edge.

Beverly says that Genevieve was physically and emotionally abusive to them, especially to Randy.  She was never affectionate with him, Beverly recalls, and treated him like a servant, constantly demanding that he do her bidding.  The two of them had no one to turn to but each other, the three older siblings having pretty much cut themselves off from Genevieve, thereby abandoning Randy and Beverly to their fate.

Randy, unfortunately, was a sickly child and grew into a sickly adult.  As a child, he had an average of ten to twenty seizures a day, and whether or not his epilepsy was properly treated is questionable.  He is considered to be mentally disabled, or, at the very least, is thought to suffer from a severe learning disability.  Beverly says that the doctors are unsure if he was born this way or if it is a result of his many seizures over the years, especially if he repeatedly hit his head during seizures, which no one can accurately confirm.

Beverly says that Randy’s life-long illnesses have prevented him from living a “normal” life.  He attended high school for two years and then quit to get a job at Burger King.  He had few friends and no hobbies or interests and spent his free time waiting on Genevieve.  At sixteen, he developed diabetes and high blood pressure.  Once out in the world at Burger King, he made a couple of friends and soon began drinking and doing drugs himself.  Before long, he was also an alcoholic drug-user liked his mother, though his body was already severely damaged from epilepsy and diabetes.

Things got worse when Beverly announced, at seventeen, that she was getting married.  “I had to get out of there.  I didn’t have a choice,” Beverly says.  She hated to leave Randy and tried her best to explain it to him.  She says that she would have been willing to have him come and live with her and her new husband, Wally, but Randy refused to leave his mother.  Nonetheless, he severely mourned Beverly’s leaving.

One year later, however, when Randy was just twenty-four, Genevieve died.  It was determined that Randy could not live alone, so, through a series of “bad decisions,” Beverly relates, Randy went to live with his grandmother.  She, too, died just two years later, leaving Randy again alone.  For a time, a nurse was arranged to come in and check on him until Beverly and Wally decided to take him in.  Once he did so, however, Beverly was shocked by how much care he really needed.  Between working and caring for her own children, she eventually determined, sadly, that she couldn’t handle it.  Likewise, it was hard to live with Randy’s sometimes violent temper, especially in the small space Beverly’s house afforded.

Beverly helped Randy to find a room at a boarding house, which seemed the only option at the time, but this, too, proved to be too difficult for Randy to handle.  Thus, still just in his thirties, he was moved into a specialized care facility, whose residents were mainly physically and mentally handicapped people.  Surprisingly, Randy met several friends there and even had a girlfriend for a time.  When he developed renal failure, however, the facility could no longer handle his needs, but they were very supportive in helping Beverly to find a new place for him.

As it turned out, Randy did not like the new facility, whose residents were much older, and he had many clashes and outbursts with the staff.  It proved difficult, however, for Beverly to get him out of this facility.  She says that she tried for over a year to move him to a new place, but that she was stuck in the facility’s bureaucracy.  When his body grew too weak to tolerate being transported to off-site dialysis, the facility finally arranged his transfer to a facility that provided on-site dialysis.

Randy seems to be making a rocky transition to the new facility.  He is angry much of the time and has poor coping skills.  He has frequent angry outbursts with the staff and sometimes even the other residents, the majority of whom are at least forty years his senior.  For this reason he does not participate in any of the activities offered and spends his time either watching TV or talking to Beverly on the phone.  When he is not angry, he seems to be sad and cries frequently.

Beverly tries to visit as often as she can, but living in Berwyn, it is difficult to get to the facility daily.  She feels a lot of guilt in not being able to help her brother more, but she has very young children at home to also care for.  She feels sad for Randy and wishes life could have been better for him.  “His life is just such a tragedy,” she says, “and he doesn’t even know it.”  She believes that “he has never really come to terms with his past” and doesn’t seem to be able to understand how horrible their childhood was.  She recalls a conversation she and Randy’s older sister, Jean, had with him a few years back on his birthday.  Jean had surprisingly appeared for Randy’s birthday that year and had taken Beverly and Randy out to lunch for the occasion.  When the conversation turned to the past, both Beverly and Jean were shocked when Randy began recalling how wonderful their mother and their childhood had been.  “We were stunned,” Beverly said, “when he told us he had had a good childhood.  It just shows how unaware he really is.”