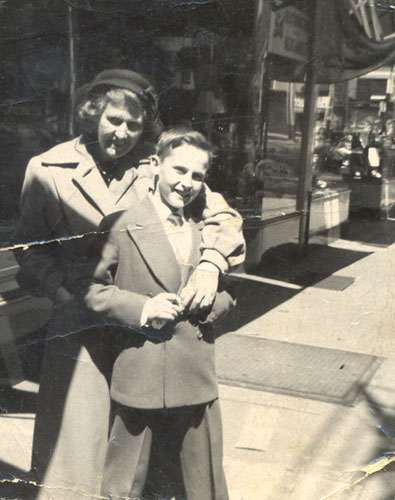 Frieda McLeod was born on April 9, 1917 in Chicago to Robert Curran and Eileen Walsh, both immigrants from Ireland who came looking for a new life.  Robert found work on the railroads and also delivering coal and flour, while Eileen worked as a cleaning lady in private homes and cared for their five children: Ruth, Charlie, Mary, Frieda and Ina.

Tragically, when Frieda was just five years old, Eileen contracted tuberculosis and died at age thirty-seven, shortly after giving birth to Ina.  Grief-stricken, Robert “fell apart” and was unable to cope with caring for the family.  For one thing, shortly after Eileen died, Ruth, the oldest child, began having seizures.  The doctors that attended her diagnosed her as having a mental illness, and she was accordingly sent to a mental asylum.  Close to a break down himself, Robert then sent Charlie to a foster home and likewise sent Mary and Frieda to go live at the Sisters of Mercy Home in Des Plaines.  Poor little Ina languished in the hospital for over two years before she was well enough to be released.  Instead of bringing her home, however, Robert arranged for her to be put directly into foster care.

Mary apparently hated living at the Sisters of Mercy and begged her father to be put in foster care instead, which he eventually agreed to.  Freida, however, was only five when she went to the Sisters of Mercy and didn’t mind it.  She stayed until she was eighteen.  She graduated from 8th grade and then pursued a two-year business degree while there.  She only remembers her father coming to see her once.

Upon graduation, she left the Sisters and got a job working at Navy Pier as a secretary in the WPA offices.  Frieda enjoyed her new surroundings and her new freedom very much.  Through friends, she was eventually introduced to a man by the name of Guy Knowles.  Guy was an engineer in his thirties, and though Frieda was very much his junior, they began dating.  Frieda fell in love with him very quickly, and she was still just eighteen when they married.  They had a baby, Dewey, together, but the marriage soured soon after that.  Apparently, Guy had been married several times before and found it hard to stay with one woman.  When Dewey was just 18 months old, Guy left to pursue a “business opportunity” in Connecticut, leaving Frieda and Dewey to fend for themselves.

In desperation, Frieda turned to her sister, Mary, and went to live with her.  She and Dewey remained at Mary’s for several years, Frieda taking jobs in various factories and offices until she landed a job at Sears, Roebuck, where she remained for over thirteen years.  It was extremely difficult to care for Dewey and work full time, however, especially during the war years, so Frieda eventually placed him in foster care until she could manage better.

Frieda eventually remarried, this time to a man named Roland Cooke, who worked as a mechanic.  Frieda sent for Dewey to come home and live with them, but he had a hard time adjusting to life with his new stepfather, who turned out to be an alcoholic and abusive.  Dewey became a delinquent and was frequently in trouble with the police.  He began taking drugs and became addicted to heroin.  Finally, he was put into a series of juvenile homes until he became an adult and was then sent to prison.  Dewey admits that he has led “a bad life” and regrets that he caused Frieda so much grief over the years.

Frieda, he says, has “a heart of gold,” and despite all of her own troubles and poverty through the years, always had an open-door policy.  Dewey remembers that their house was always open to anyone who needed a place to stay until they could get back on their feet again.  Frieda, he says, was a true “good Samaritan,” never worrying about herself.

Frieda eventually divorced Roland and then married Gordon McLeod, a retired fire lieutenant, but that marriage, too, broke up after only a few years.  Frieda then went to live with her sister, Ina, for a little while and from there moved in with Dewey, who had an apartment on Mozart.  For the few years they lived together on Mozart, Frieda and Dewey seemed to have gotten along, their favorite pastime being to go and watch various Chicago sporting events.  Frieda is a big fan of all the Chicago teams: Bears, Bulls, Blackhawks, Cubs and Sox and would go to see any of them at any time.

Eventually, however, Frieda’s declining health got to be too much for Dewey to handle, considering his own long list of problems and issues.  Somehow the State Guardian’s office got involved in Frieda’s case and appointed her a public guardian, a Ms. Karen Vargos.  Ms. Vargos assisted in arranging for Frieda’s admission to a nursing home, where she has resided for about six months.

Frieda is a quiet, pleasant woman, but she appears depressed and apathetic.  She has no interest in forming any new relationships or joining in any activities, nor does she really seem to want to converse with the staff.  She enjoys smoking and watching sports on TV and waits for Dewey’s visits, which are infrequent.  She misses him, she says.  “I know he wasn’t a very good son,” she says, “but he’s all I have.”