Her Mother—Age 93— Still Took Care of Her! 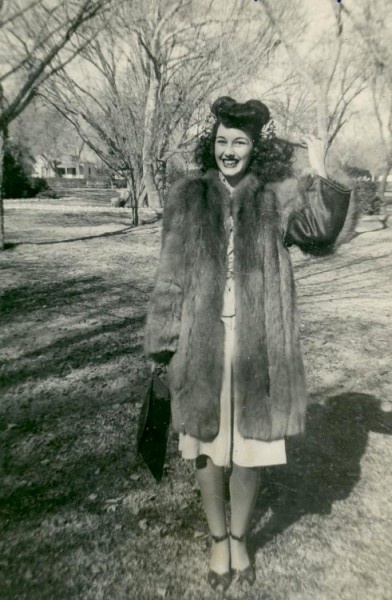 Shirley Denenberg was born on November 24, 1923 in Chicago to Aleksandr Krasny and Marie Altman.  Aleksandr emigrated from Kiev as a young man and found work in Chicago making cigars.  Marie was born in Chicago, though her parents were also Ukranian Jews.  She and Aleksndr had three children: Shirley and Susan, who were twins, and Stanley.  When they were little, Marie stayed home with the kids, but once they were in school, she found work as a clerk at Woolworths.

Shirley attended high school for a couple of years and then quit to marry her high-school sweetheart, John Denenberg.  John was a couple of years older than Shirley and already had a job driving a bakery truck.  After they were married, they got an apartment one floor down from her parents’ apartment in a building on Ridge Avenue.  Pretty soon, three daughters came along: Mildred, Anna, and Helen.  Shirley stayed home with them and says she enjoyed being a housewife and a mother.  When the girls were all in high school, though, Shirley got a job working in the office at a public relations firm.

Shirley’s daughter, Anna, says that her mom was the kind of person everyone wanted to know and that she had lots of friends.  She loved bowling and all types of board games, Monopoly being her favorite.  She and John did a little bit of traveling in their retirement and visited California, Texas, and Nevada before John died in 1988 of Parkinson’s and Liver Cancer.  They had been married for 43 years.

Shirley experienced several unexpected deaths in her lifetime.  Her father died young of a heart attack at age 58, and her twin sister, Susan, died suddenly at age 52.   The death of her sister was particularly hard on her, Anna says.  When John died, Shirley again grieved and went through a period of exploring the city, perhaps as a way of dealing with her grief.  She would ride the CTA all over the city, Anna says, and would spend all day at museums or walking around neighborhoods.

In the early 1990’s, however, Shirley began to slow down and started having a lot of health issues.  She had surgery on her legs at one point, and had a number of falls in which she broke her collarbone and ribs.  At that point, she was still living in the apartment building on Ridge where she and John had raised their family.  Shirley’s mother, Marie, was likewise still living in an apartment one floor above, and was shockingly in better health at age 93 than Shirley.  So it was that when Shirley was recovering from her many falls, Marie came down every day and took care of her and cooked meals for her!

Realizing that this was probably not a good long-term situation, Shirley’s three daughters decided that they needed to take action.  Anna took Shirley into her home, and Helen was willing to take Marie, but Marie refused to move to Colorado where Helen lives.  In recent months, Shirley now requires regular dialysis treatments and has developed other complications, so the decision was made to move her to a nursing home.  Anna says it was a very hard decision, but she is trying to do what’s best for her mother.

Shirley is not happy about her placement and is having a very hard time adjusting.  She appears depressed and angry most of the time and lashes out at the staff.  She does not like to participate in activities, nor does she seem to interact well with other residents.  She has become obsessed with her health and wants to talk or complain about it constantly.  When staff attempt to redirect her, she becomes angry and demands to go home.    Anna visits as often as she can, but she is also caring for her Downs Syndrome son at home, so she is limited in how much she can help.  “In some ways,” she says, “it was easier to have mom at home,” but it just got to be too much.  She feels guilty that she can’t do more for her mom.  Both Helen and Mildred live out of state, and Marie still believes Shirley to be living with Anna, though she has been told otherwise.

Meanwhile, Shirley continues to be upset and unhappy.  Anna says that it is hard to see her mom this way – so angry and negative, as she was a very happy-go-lucky person when she was younger.  Anna suspect’s that John’s death was harder on her then they all thought.  “She put a brave face on for a very long time.”