“He Stayed in the Picture” 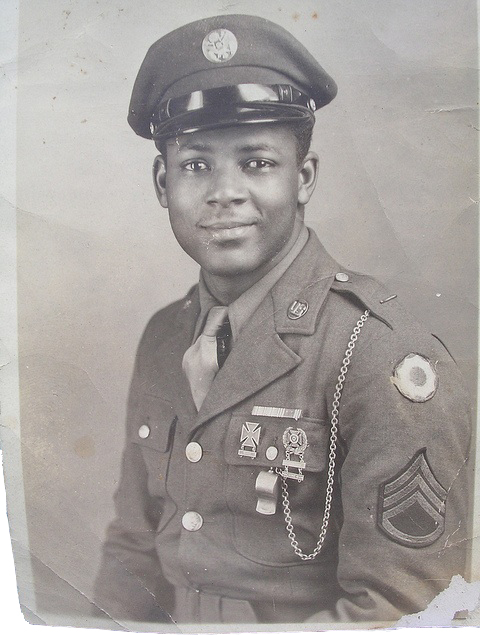 Jonathon Arthur Conrad was born on January 19, 1919 in Arkansas to Bruce “Bubba” Conrad and Marian Moore.  Jonathon was apparently their only child.  Bruce worked doing odd jobs, and Marian was a house wife.  Jonathon graduated from high school and worked for a few years in a warehouse.  He eventually married Ethyl Jones, a girl he had gone to school with.  The two of them had always gotten along, but after they married, their relationship quickly soured and they divorced.  When World War II broke out, Jonathon enlisted in the army and was sent to the South Pacific for most of the war.

When he was discharged, Jonathon returned to Arkansas and thought he might try to start over with Ethyl, but he found she had already remarried.  He turned his attention to work, then, and tried to find a job, but it was difficult.  He found temporary things, but nothing steady.  Finally, in 1957, he decided to try his luck in Chicago.  He did not want to leave his mom, as he had a feeling he would never see her again, but she persuaded him to go, telling him that it was his chance for a new life.

In Chicago, Jonathon was able to find a job almost instantly as a truck driver, which he worked at for a year before getting a job at the Leif Candy Company as a janitor.  At some point, Jonathon met Lula Wilson, who was quite a few years his junior, and they married.  Together they had two children: Jonathon, Jr., or “Johnny,” and Cora.  Jonathon and Lula were apparently very happy together at first, but then Lula began to resent the fact that Jonathon never wanted to go out.  Jonathon was content to stay at home, but neither was he happy if Cora went out with girlfriends.  The two began fighting often, and finally, when Johnny was thirteen and Cora eleven, Lula and Jonathon divorced.

“He wasn’t like most men, though,” says Jonathon’s daughter, Cora.  “He stayed in the picture.”  Jonathon paid Lula child support and took the kids to live with him in the summers.  Cora said that despite her initial anger with her parents, and him in particular, she has a lot of respect now for her father for being a responsible father.  When she was a teenager, she went to stay with him year-round.

According to Cora, Jonathon enjoyed pottering around the house and was always fixing something.  He also loved watching westerns and riding his bike along the lake.  He had a lot of friends and had a poker night at his house every Thursday for over fifteen years.  One thing that Cora was shocked by, however, after going to live with her father, was how much he drank.  She begged him to get help, but he refused to, so she eventually went back to live with her mother.

Once back at home with Lula, Cora found that not only was her mother suffering from an early form of arthritis, which left her unable to get around, but that she resented Cora for abandoning her to go and live with Jonathan and thus frequently lashed out at her.  To make matters worse, Johnny had moved to Peoria while Cora was gone, making it all the harder for Cora.  Eventually, she graduated from high school and moved out almost immediately, having grown weary of caring for her dysfunctional parents.  In 1984, she got married and moved to River Forest.

In the late 1980s, Jonathon was diagnosed with mild brain damage due to his heavy drinking and smoking and found it increasingly difficult to live alone.  He then decided to move to Somerset House, an apartment building for seniors on the north side, where he quit drinking and smoking cold turkey.  Cora did not visit her father for almost a year, but was forced to go see him when she found out that her brother had died suddenly of a heart attack.  She felt she should tell her father the bad news in person and therefore went to see him at Somerset.  Jonathon was stunned by the news, and he and Cora broke down and cried together for a long, long time.

Johnathon had apparently been doing well before Johnny’s death, but after his funeral, he spiraled into grief and went back to smoking and drinking.  He eventually had a stroke, several years later, and was hospitalized for several weeks.  He was transferred to a nursing home, where he remains unresponsive in a semi-conscious state.  Cora visits daily and insists that her father is aware of her presence and that he responds to her questions by opening and closing his eyes, but the staff have not yet been able to corroborate this.

Cora is having a very hard time accepting her dad’s condition.  Lula is still alive but not physically able to visit Jonathon due to her own health issues, but has told Cora that she isn’t really interested, anyway.  It has unfortunately fallen on Cora, then, to still be his only support system.  At times, she brings her grandson with her, which seems to help her to cope with the situation.