“He Never Got to Enlist” 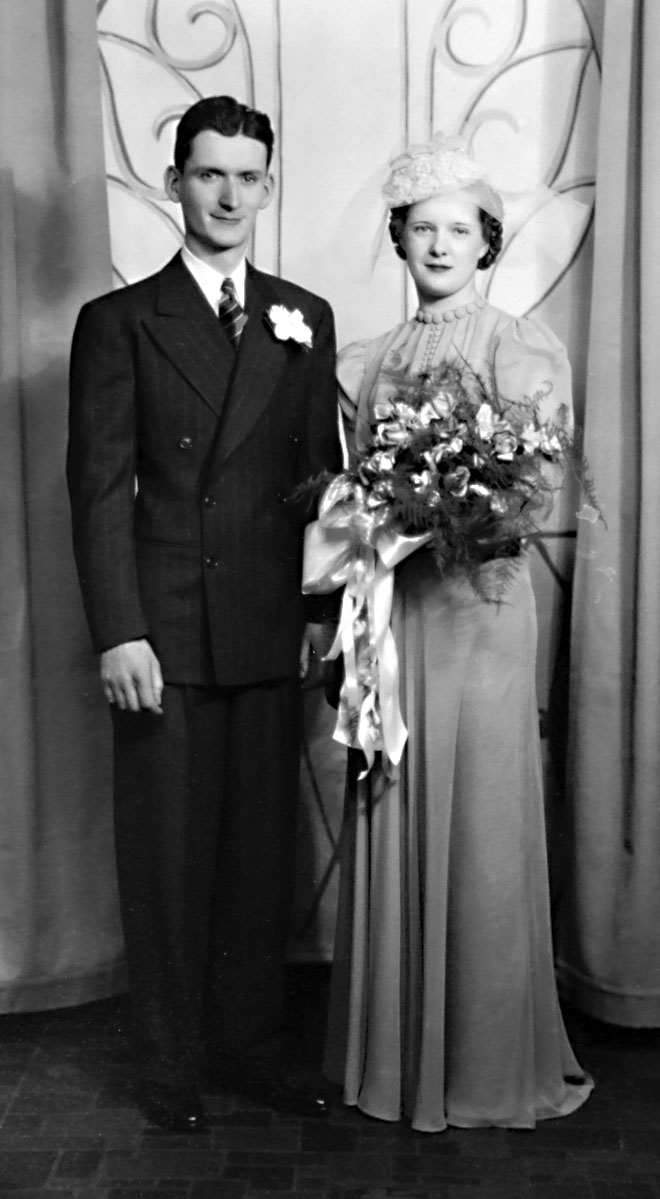 Arndt “Arnie” Winkler was born on February 8, 1911 in Odell, Il. to Hagen Winkler and Eileen Burke.  Hagen was of German descent and worked as a farmer on his eighty-acre farm.  Eileen was of Irish descent and cared for their ten children: Karl, Daniel, Lorene, Augustus, Freda, Arndt, May, Felix, Essie and Elbert.  Hagen’s father, Arndt, also lived with them and was apparently Arnie’s favorite person in the whole world.

Arndt, the elder, lived into his nineties and helped on the farm until his dying day.  The family always said that it was a good thing Grandpa Arndt was there because when Hagen was fifty years old, he suffered a blow to the head (the details are unknown), which resulted in him having seizures for the rest of his life.  Despite this handicap, Hagen was still able to sometimes work on the farm alongside his father and six sons and lived into his eighties, as did Eileen.

Arnie, the younger, grew up working on the farm and went to two years of high school before he decided to try his luck painting houses.  He liked it more than working on the farm or going to school and was able to make some money at it.  Eventually, however, he decided to follow his two sisters, Freda and Lorene, to Chicago, where they had moved to get work.  There, he joined a painters’ union and easily found a job.  He had few friends at first, though, so he often spent his free time with his sisters.  One night, Lorene invited Arnie to come with her and some of her friends to see a movie, and it was then that he was introduced to one of her friends, Sally Knapp.

Arnie and Sally hit it off right away, and the two of them began dating.  They were married in 1939 and got an apartment on the south side on S. Aberdeen Street.  There they had two children, Rose and Arndt, Jr.  They moved several more times over the years and eventually bought a house in Elmwood Park.  Both Arnie and Sally were active in the Catholic Church and were members of various parishes, depending on where they lived, including Our Lady of Sorrows, St. Bartholomew, Our Lady of Victory, St. William, and St. Edna.

Arnie was fiercely patriotic, and when the war broke out, he went to enlist but was turned away because he was over twenty-nine with two children.  He was devastated that they wouldn’t take him, so he threw himself into his work instead and did what he could on the home front.  “He talked about it all the time,” his daughter, Rose, says, “that he never got to go to the war.  I think he felt ashamed for a long, long time.”

Arnie loved fishing and going to the movies and religiously read the paper every day.  He did not go out much, but he loved to play cards.  He and Sally were part of a card club, and they hosted many, many card parties over the years.  Arnie and Sally apparently had a very good marriage, says Rose, though Arnie smoked and drank a lot.  He quit smoking at age forty and was in exceptionally good health for most of his life, of which he was extremely proud.  He used to brag that when he was sixty-six and had to have a hiatal hernia treated, his doctor supposedly said, “You have the body of a fifty-year old!”  Still, Arnie officially retired at that point, though he continued to do house-painting on the side for old customers or referrals.  He and Sally enjoyed their retirement years and did a little traveling around the Midwest.

In his early eighties, however, Arnie began to be confused, disoriented, delusional, paranoid and occasionally violent.  Rose and Arnie, Jr. took him to a doctor, who diagnosed him with substance abuse and Alzheimer’s.  The doctor’s recommendation was to for him to go to a home, but Sally refused and brought him back to care for him at their house in Elmwood Park.  She tried for the next three years to care for him with Rose stopping in to help at times, though Rose had her own family and health issues to contend with.  Likewise, Arnie, Jr, has not been able to help in his father’s care because he lives in Indianapolis.  The stress on Sally has been terrible, Rose says, but “she is just as stubborn as him.”  Finally, when Sally recently had to be admitted to the hospital herself with a possible stroke, Rose, with Sally’s permission, finally arranged for Arnie to be admitted to a nursing home.

Arnie remains confused and disoriented and is not making a smooth transition to the facility.  Likewise, Sally has since gotten out of the hospital and is having a hard time dealing with an empty house.  She comes to visit Arnie daily and spends most of the day with him.  She is glad he is being cared for, but she does not, even now, accept the fact that he has Alzheimer’s.  “He’s just confused,” she says and is waiting for him to get better so that he can come home.  “He was so different,” she tries to tell the staff.  “This isn’t really him.”