“He Could Have Been a Great Man” 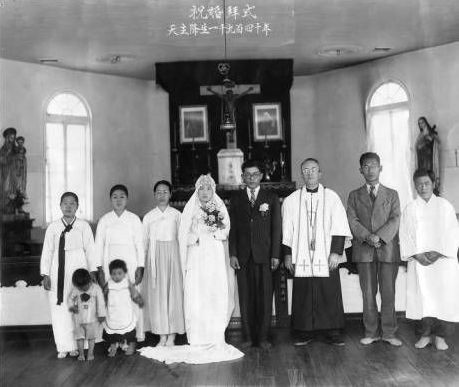 Do- Yun Chung was born on August 2, 1914 in Pusan (now Busan), Korea.  His family was relatively well off, with his father working as a surveyor and his mother caring for their six children—three girls and three boys—of whom Do-Yun was the youngest.

Do-Yun went to law school and after earning his degree got a job as a vice principal in a junior high school.  He was a very religious man and was opposed to both hunting and fishing because of his beliefs.  He loved teaching, however, and also enjoyed sports of any kind, drawing and painting.  He also did a fair bit of traveling around Korea and went to Japan and China many times.

When he was forty-two, he was set up with a young woman by the name of Haneul, who was twelve years his junior.  Do-Yun and Haneul married soon after meeting and eventually had a son, Sung-Ho, and a daughter, Ji-Eun.

When Ji-Eun was old enough, Do-Yun arranged a marriage for her to a young teacher at his school by the name of Woo-Jin Park.  Apparently, however, two weeks into the marriage, Ji-Eun discovered that her new husband was still seeing his former lover and suffered a nervous breakdown.  Haneul, who had never been fond of her Do-Yun’s choice of husband for Ji-Eun, took her back in to their home.

According to Haneul, her own marriage to Do-Yun had never been a happy one, and she claims that Do-Yun repeatedly abused and strictly controlled her over the years.  At one point, Do-Yun admitted to this, saying that he was following his father’s advice to have a heavy hand lest his wife find someone else.  Do-Yun says that he felt this to be especially necessary with Haneul, as she was so beautiful and so much younger than himself.  He was constantly worried that she would run off with another man.

So when Ji-Eun’s marriage fell apart, Haneul saw this as her chance to escape.  She appealed to a cousin living in Chicago, and began to make arrangements for her and Ji-Eun to immigrate to the United States.

Under the pretense of their trip being only a visit to give Ji-Eun a change of scenery, Haneul and Ji-Eun made their way to Chicago and found an apartment on Ravenswood.  Haneul began attending Truman College, eventually earning a degree in education and then getting a job at Truman teaching English as a second language.  Ji-Eun, meanwhile, never really recovered from her traumatic marriage and remains mentally unstable.  She has not able to hold a job all these years and is basically a recluse.

In the early 1980’s, after much pressure from Do-Yun, who did not realize that Haneul’s trip to the United States was a permanent move, Haneul agreed to take steps to arrange for him and Sung-Ho to immigrate to the United States as well.  She hoped that over the years, Do-Yun might have changed, and likewise, she also missed her son and wanted him to be closer.

After Do-Yun and Sung-Ho arrived, Haneul was able to get Do-Yun a job as a janitor at Truman College, which he resented very much.  “He has always been very proud and deeply traditional,” Haneul says.  She believes that he couldn’t accept the fact that Haneul was educated now and had a teaching position while he now held such a lowly one, especially with a law degree.  He also found it hard to adjust to American culture in general.  He was not happy from the get-go, though Haneul tried to introduce him to the Korean community she had become a part of.  “It’s a shame,” she says, “as he could have been a great man.”  She suspects that there was much violence in his family growing up, and that his abusive behavior was learned.

As it turned out, Do-Yun soon went back to his old ways of trying to control Haneul through physical violence, so Haneul legally separated from him.  She forced him to get his own apartment, but wanted Sung-Ho to remain with her and Ji-Eun.  Sung-Ho, already in his twenties at this point, was tired of the bickering and moved to Atlanta.  He remains there now, working as a dental technician.  He lives with a woman and has two children with her, and has not had contact with Haneul in many years.  Indeed, she has never met her grandchildren, which is a great source of sadness for her.  She regrets now that she did not take him with her when she first left Korean, but she felt that if she had insisted he accompany her, Do-Yun would not have allowed her to leave at all.

Though Haneul forced Do-Yun to get his own apartment, he has continued over the last few years to show up at hers and harass both her and Ji-Eun, whom he also blames for his troubles.   Haneul claims that in some ways he was even worse than before because now he seemed confused as well.  About two months ago, he unexpectedly showed up at the apartment and began to beat Haneul, seeming to think they were still in Korea.  Haneul managed to call a Korean doctor friend, who had Do-Yun admitted to the hospital, where he was diagnosed with dementia, among other things.

From there, Do-Yun has been transferred to a nursing home, where he seems to be making a relatively smooth transition. He is talkative with other Korean residents, but does not like to join many activities.  At times he seems alert, but at other times he is very confused and forgets where he is.  Apparently he has been calling Haneul, demanding that she come and get him, but she refuses to even visit him.  She has asked the staff to not allow him to telephone her and does not want any part of his care.  Likewise, she has asked the staff to begin the process of getting a state guardian appointed for him, as she wants nothing more to do with him.  Meanwhile, Do-Yun does not accept any of this and insists he will soon be going home.  When staff attempt to discuss his version of the past, he refuses to comment.