“He Can Walk Because of Me.” 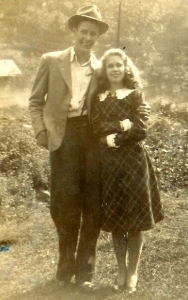 Thomas Bisky was born on June 30, 1910 in Brooklyn, New York, to Stefan Brzezicki and Magda Chmiel.  Stefan and Magda were both born in Poland where they met and married.  Not much is known about what their life in “the old country” was like, except that Stefan served in the army for a time.  At some point, Stefan and Magda managed to immigrate to the United States, where their married name “Brzezicki” was recorded as “Bisky” at their port of entry.

With their new name, the Bisky’s settled in Brooklyn, New York, where Thomas was born, and then moved to a farm in Hawley, Pennsylvania, where Stefan worked as not only a farmer, but a coal miner as well.  Magda cared for the children, but Thomas can’t quite remember how many there were.  Besides himself, he remembers Gladys (who legally changed her name to Susan at age seventy), Albert (who went by Frank), Charles and Florence.  Thomas’s son, Walter, claims that there was also a fourth brother whom no one ever talks about, a “black sheep,” who lost contact with the family long ago.  And there may have been two more children who died during the flu epidemic, Thomas says, but he isn’t sure.

Thomas went to school through the eighth grade and then started working in the mines with his father.  He soon tired of this, however, and got a job in construction instead.  Jobs were scare, though, so he moved to New Brighton, Pennsylvania to find work.  When he first got to New Brighton, he stayed in a boarding house and was befriended by another young man, Cal Trenfor, who was staying there.   Cal and Thomas became friends, and Cal eventually got around to introducing Thomas to his sister, Ethel.  Thomas and Ethel began dating and married soon after.  They got an apartment in nearby Elwood City and then bought a house in New Brighton in 1949, where Thomas has since lived all these years.

Thomas got a job at the B&O Steel Mill and worked there for 31 years until he retired.  He and Ethel had two sons: Thomas, Jr. (Tom) and Walter.   Apparently, when Walter was born, he was a breech birth and born with a broken shoulder and crooked feet.  Thomas still tears up when telling the story.  At the time, Thomas was devastated that his new little son was born “deformed,” especially when the doctor said that he would have to go to a special home to live.  Thomas refused to send his son away and instead begged the doctor to try to do something himself.  Reluctantly, the doctor agreed to try to put special casts and braces on Walter’s legs and feet.  Shockingly, over time, Walter’s legs did indeed straighten out, as much to the doctor’s amazement as to everyone else’s.  Walter was then deemed a “normal” boy by the doctor, who insisted on proudly displaying him to his colleagues.  But Thomas also took much pride in the part he played for his son, often saying, “He can walk because of me!”

Thomas apparently did not have many hobbies, except whittling.  Also, he and Ethel loved to go dancing on Saturday nights.  Both of their boys grew up and moved away: Tom to Virginia Beach and Walter to Chicago.  In 1989, Ethel passed away from cancer.  Thomas continued living in the house alone, spending his time pottering about and doing a little bit of gardening.  Recently, however, both Tom and Walter began to notice that their dad was seeming more and more confused when they would call him on the telephone.  Also, he was sounding more and more depressed and was rarely leaving the house.  It just so happened that right about this time, Walter’s wife, Linda, was looking for a nursing home for her mother and suggested that maybe Walter should arrange for Thomas to be admitted to the same facility.

At first, Thomas was resistant to leave New Brighton to move into a nursing home in a different city, but Walter assured him he would visit daily.  Thomas agreed, then, and the house that he and Ethel had lived in for over forty years was sold.  Thomas seems to be making a relatively smooth transition to his new home, though he is sometimes confused and forgets where he is.  He is quiet and shy and seems nervous most of the time, though he was a wonderful sense of humor when in conversation.  He will join in activities, but only when encouraged to several times.  His favorite is “Big Band Hour,” followed closely by bingo.

Walter has so far kept his promise and visits daily, often bringing his own children or grandchildren along, and which Thomas really looks forward to.  Despite the fact that they have lived apart for so many years, they seem to share a deep love for each other.  When asked about Ethel, Thomas still seems sad but usually catches himself and says “at least I have Walt.”