The Odd Life of Joseph Hertz 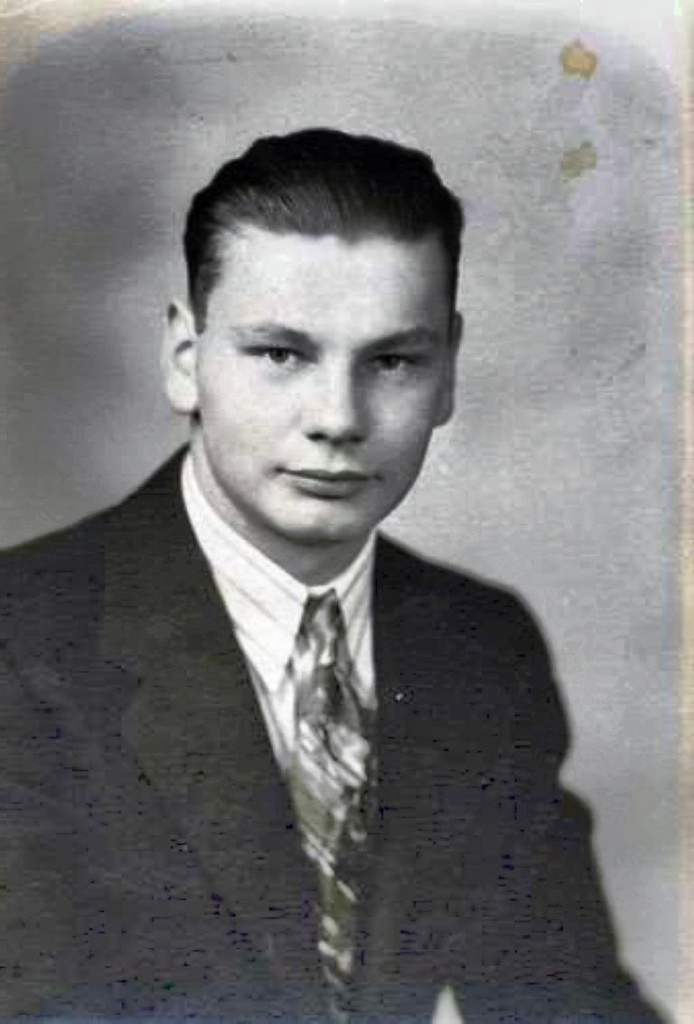 Joseph Hertz was born on May 3, 1916 in Washington, D.C. to Victor Hertz and Lena Aerni.  Victor was of German descent and worked as the head accountant in a large firm in Washington.  Lena was of Swiss descent and cared for their two children, Joseph and Louisa, who were five years apart.

When Joseph was very small, Victor was transferred to Columbus, Ohio.  Joseph says he has only one memory from their time in Columbus.  He remembers going to a park with his father and seeing some swans swimming on a small pond there.  Joseph desperately wanted to pet them, so he wandered into the pond, not knowing how to swim.  Miraculously, his father saw him just as he was going under and jumped into the pond to save him.

After only a few years in Ohio, Victor was again transferred, this time to La Grange, Illinois, where Joseph attended grade and high school.  His father went golfing every Saturday at the country club, and when he was old enough, Joseph was allowed to go with him.  Joseph was a hard worker and besides keeping his grades up, had various odd jobs, such as mowing lawns and weeding gardens.  He eventually got a “real job” delivering groceries.  Most of his time, however, was taken up in helping his “no good sister, Louisa.”

Louisa, five years Joseph’s senior, had married young and had a baby almost immediately.  Louisa, it seems, was not the maternal type, and frequently insisted on Joseph coming over and watching the baby, Carolyn—or Carrie, as she was called—while she and her husband went out.  Joseph said he loved Carrie and didn’t mind caring for her, but it was hard for him to balance everything.  His dream was to go to Notre Dame and play football.

Just a few weeks shy of his high school graduation, however, a terrible accident occurred.  There had been a school dance, which Joseph had attended.  He had been set up with a date, and when the dance ended, he walked the girl safely home.  As he was walking toward his own home, however, a car came around a curve and hit Joseph nearly head on.  Joseph spent weeks in the hospital with a brain injury, and it wasn’t clear whether he would live or not.  He finally came out of it, however, and began to mend, but his dreams of graduating from high school and going on to college were crushed.

His parents helped him at first, but eventually he was forced to move out on his own, though it is not clear why.  With the help of his father, he was able to get a job in a laundromat, but when he didn’t show up for work one day and didn’t call, he was fired.  He tried to explain to the manager that he had passed out and couldn’t call, but the manager didn’t believe him.  He tried a variety of other jobs, but the same thing always happened.  He would either pass out at home or on the job and would then be fired.

At one point he managed to get a job at Wallis Press, first on the cutting machine and then on the folding machine.  He was very nervous that he might pass out while operating such heavy machinery, but he tried his best.  Eventually, he did pass out and the owner insisted he go to a doctor.  His foreman had taken a liking to Joseph and in the past had always covered for him, sometimes even punching him on and off the clock when he was really at home sick.  Finally, though, when he passed out on the job and it was brought to the owner’s attention, he was forced to see a doctor.  Not surprisingly, the doctor diagnosed him as “unfit to work” and said he would inform the foreman and the owner of the press that Joseph would not be coming back.  Depressed, Joseph agreed and did not go back to say goodbye.

Several years later, while walking down a street in Chicago, Joseph felt a shove from behind and turned to see his old foreman from the press, who was clearly upset with him.  He accused Joseph of walking off the job after he had done so much for him.  Joseph hurriedly explained that the doctor he had been forced to go to had diagnosed him as “unfit to work” and that he was supposed to have sent some kind of a report to the factory verifying that.  The foreman claimed that they had never received a phone call or a letter from this doctor, which had led them all, at the time, to believe that Joseph had merely quit.  Joseph apologized for the misunderstanding, and the foreman felt so bad for him that he offered him a “light duty” job in the mail room if he wanted to come back.  Joseph thanked him for the offer, but ultimately turned him down.

As it was, Joseph was at an all-time low.  He claims that in his twenties and thirties, he was married two times, but that both wives had died.  His first wife, Agatha, was a nurse he met while in the hospital after being hit by a car.  He says that she died, however, soon after their marriage, and that he eventually met another nurse, Marion, whom he also married.  Marion also apparently died, leaving Joseph alone in the world.  His parents died young, and Louisa and family had since moved to Kansas and did not maintain contact with him.

Without a job or any hopes of ever being able to hold one down, Joseph became homeless and eventually began sleeping on park benches.  One night, after some cops came by and tried to get him to move on, a strange man approached him and asked him if he needed a place to stay.  Joseph said yes, but told the man that he had no money.  The man asked him if he could stand living in the park for just one more night until he could get a place ready for him.  Joseph said yes and the next day showed up at the man’s apartment, as instructed.  Joseph says that there were many homosexual men living in the building, so he decided to stay with them for only a couple of nights.  Whether through their help or on his own, he was eventually able to get a job at a restaurant and then at a newsstand.

Joseph seemed to be able to handle working at the newsstand pretty well.  One customer became a sort of friend and eventually told Joseph that he knew a woman he would like to introduce him to if he was agreeable.  Joseph said yes and, with his friend, went to meet the woman, Betty Lindh, who was living with her aunt, Thelma Kloburcher.  Betty had been married before, Joseph learned, but her husband had routinely beat her, so she eventually divorced him.  She worked at the Harvard Insurance Company, but, like Joseph, had been in a car accident, which left her “a cripple,” and she used a walker to get around.

Joseph and Betty took an instant liking to each other and married quickly, each one willing to overlook the other’s disability.  Joseph accordingly moved in with Betty and Thelma, but it soon became evident that this arrangement wasn’t going to work out.  Thelma became extremely jealous of any attention the Joseph and Betty gave each other, culminating in Thelma one day breaking a plate over Betty’s head.

After that, Joseph and Betty took a room at a boarding house at Clybourn and Fullerton for $16 a week, and later moved across the street to a one-bedroom apartment for $18 a week.  According to Joseph, he and Betty had a very tumultuous sort of relationship.  Joseph says that they loved each other very much, but that they had a lot of problems, the biggest one being Betty’s alcoholism.  Joseph claims that she often did strange, unpredictable things, like waiting for him with a knife one night when he came home from work.  She was furious with him for something, and Joseph thought she was waving the knife at him to make a point of scaring him.  He was stunned, then, when she actually lunged for him and stabbed him in the side.  He did not go to the hospital, however, not wanting to report it.  Instead he bandaged it himself and waited for it to heal.  He admits, though, that he was equally violent at times, and claims to have attempted to strangle her one night.  Having violent, emotional battles, often involving some sort of physical abuse, followed by a speedy, dramatic make-up, seemed to be a recurring pattern in their relationship.

In 1987, Betty’s health began to go downhill, so much so that it became apparent that she needed to be admitted to a nursing home, as Joseph could no longer take care of her.  Joseph couldn’t stand the idea of being parted from her, however, so he checked himself into the same nursing home.  After only six months, however, Betty passed away, leaving a grieving Joseph behind.  After her death, Joseph began to hate the facility and wanted to transfer to a different home.  He appealed to the public guardian’s office, saying that he was a victim of elder abuse.  A guardian was appointed, and though no proof of abuse was ever produced, the guardian was able to find a new placement for Joseph.

Joseph is currently enjoying his new surroundings, though he says he misses Betty terribly.  He also misses some of the staff at the other nursing home whom he had gotten used to and who had befriended him.  Still, he says, “you have to make the best of it.”  His favorite thing to do is to watch baseball on T.V. and particularly enjoys it if a group of other residents sit near him.