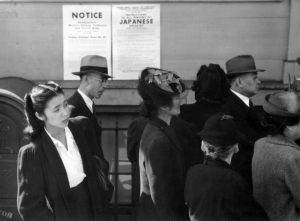 Rosemary Tsukuda was born in Santa Cruz, California on March 10, 1913 to Japanese immigrants. Her father, Chihiro Hayashi, left Japan as a young man in search of adventure. His travels took him to Australia and then to California where he found work as a gardener and mechanic for a wealthy man in Santa Cruz.  For a short time, Chihiro tried his luck in Florida, but he was unsuccessful in finding a job there and so returned to Santa Cruz.

Eventually, Chihiro’s thoughts turned to marriage, so he wrote to his family asking them to find him a wife. Excitedly they wrote and said that they had found a good match with a neighboring family. The girl’s name was Ayaka Ito, and she had always had a desire to see America and to be educated. Thus, Chihiro returned to Japan to marry her and then took her back to California with him. Together, Chihiro and Ayaka had ten children: Franklin, Robert, Estelle, Edward, Rosemary, Clement, Virginia, Norma, Walter and Leonard.  Tragically, six of them died in childhood (Franklin, Robert, Estelle, Edward, Norma and Leonard). Thus, Rosemary, who had been born a middle child, then became the oldest.

Rosemary attended San Jose State University and from there went to art school in Los Angeles. She was employed by Walt Disney Studios and also worked on the set of Gone With the Wind. Her career and future indeed seemed very promising until World War II broke out and she found herself “rounded up” and taken to a “relocation center” with thousands of other Japanese-Americans. She was separated from her family and sent to the Amache camp in Colorado.

As she was boarding the bus that would take her there, however, Rosemary found a beautifully packed lunch on each of the seats, put there by the Quakers in an attempt to “love thy enemy.” Rosemary was very touched by this, and it sparked a life-long interest in the Quakers.

Rosemary spent three long years in the camp and there met her future husband, Katsuo Tsukuda.  At age twenty-four, Katsuo had developed TB, which at that time had no cure.  He spent three years suffering with TB and believing that he was going to die, but then miraculously recovered. Shortly afterwards, however, he, too, was sent to Amache, even though his brother was in the American air force.

At Amache, Katsuo had a special kind of compassion for the sick and eventually became a sort of chaplain-like figure, a role which shaped his decision to become a minister, just as his father was. He also decided to propose to Rosemary, whom he had gotten to know well and whom he guessed would be a good partner as the wife of a minister because she had perfect English.

When they were finally released, Rosemary and Katsuo moved to Chicago where his father had founded a church, and Katsuo wanted to help him.  Katsuo says that before the war, there were only about 300 Japanese people in Chicago, but after the war when the Japanese were released from the internment camps, the number of rose to 30,000.  He says he can still remember the radio advertisements put out by the government to entice business owners to hire Japanese-Americans because they were “well-educated, honest and industrious.”

Though many Japanese were bitter about their experience, Katsuo says that neither he nor Rosemary held any grudges. Katsuo says he understands why the Americans may have thought they were dangerous and doesn’t blame them for what they did.  He felt very honored when the United States, years, later, publicly apologized and offered people restitution.  Katsuo says that there were some positives that came out of the experience.  For one thing, he met Rosemary and realized what his vocation in life was.  Also, he says, it forced the Japanese people to spread out all across America instead of staying only on the coasts.

Katsuo says that once settled in Chicago, he threw himself into his ministry, and Rosemary became the breadwinner of the family, finding work as a successful commercial artist in Chicago. For whatever reason, they did not have any children.  Rosemary ran their household and was responsible for all of the day-to-day things, as well as managing a career.  She had very close friends and was a very honest and true person and a good judge of character, says Katsuo.  She was fascinated by Latin culture, loved food and traveling and entertaining. She was very active in the Quaker church and also kept up a fifty-year correspondence with her fellow artists whom she had worked with on the set of Gone With The Wind.

When she was forty-five, Rosemary decided to switch careers and went back to school to become an occupational therapist.  She worked for many years in that capacity at Evanston Hospital.  Katsuo says that she was an extremely intelligent woman, but she didn’t like to show it.  She was very modest and humble.

In the early 1990’s, Rosemary collapsed at home, and it is thought that she may have had a stroke.  Upon finding her on the floor, Katsuo put her in bed and cared for her, rather than take her to the hospital.  After six days, she began eating again, but her mental function was not what it had been.  Since then it continued to get worse until 1996 when she suffered another stroke.  This time, Katsuo called an ambulance, and Rosemary was eventually discharged to a nursing home.

Rosemary is making a fair transition to her new home, though she seems confused most of the time.  She prefers to sit quietly in the day room beside Katsuo, who visits daily.  Katsuo is quite beside himself and is having a hard time functioning alone at home.  He is considering moving to the nursing home as well because he says he misses Rosemary and wants to take care of her.  “We’ve been through a lot together, and I just can’t live without her,” he says.