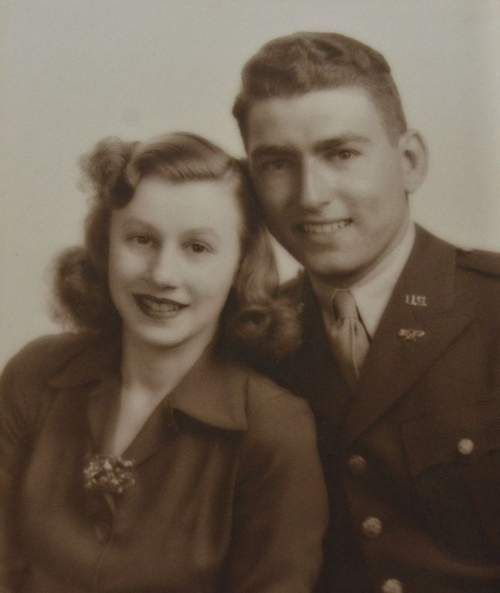 Esther Andrews was born on February 14, 1910 in Chicago to Lester Simonis and Nellie Baird.  It is thought that Lester was an immigrant from Latvia and that Nellie had been born in Scotland.  According to family legend, shortly after Nellie arrived in America as just a baby, her parents both died, and she was placed in an orphanage.  At fifteen, she began working as a maid, where she met Lester Simonis, who delivered the daily milk to the house she was employed at.  Lester eventually proposed to Nellie, who accepted him, and they were married soon after.  Nellie quit her job to care for their eventual four children: Verla, Clifford, Stella and Esther, while Lester continued working as a milkman.  When Esther was just a baby, however, Lester died, though no one in the family seems to remember of what.  Nellie took in washing for a while to make ends meet, and eventually ended up marrying Daniel Juric, a kind man, who worked in various factories around the city.

Esther received a somewhat sketchy education, only attending school through the fourth or fifth grade.  She quit school and got various odd jobs until she found a permanent place at the Excelsior Seal Furnace Company on Goose Island at age thirteen.  Her job was to pack the parts in boxes to be shipped out.

When she was nineteen, however, her mother, Nellie, died unexpectedly of the flu.  Esther was the only one still left at home, so for a while she and her grieving stepfather, Daniel, tried to make a go of it.  Daniel, however, went into a deep depression, and Esther found it hard to cope with him just on her own.  She appealed to her older sister, Verla, who agreed to take in both Esther and Daniel, provided that Esther “do her part” around the house.  Esther, eager to be relieved of the sole responsibility of caring for their stepfather, agreed to her sister’s conditions, but soon lived to regret it.  Verla gave Esther long lists of chores that she was expected to complete each day, including gardening, in addition to working at Excelsior Seal.

This continued for nine long years until Daniel met another woman, Mary Budny, at a dance.  They married six months later, and Daniel finally moved out of Verla’s home, leaving Esther behind, who, at age 28, was beginning to think life had passed her by.   She hated living with Verla and her husband, Bob, and being “their slave,” but she couldn’t see any other option.

Esther had nearly resigned herself to being a spinster until one day, September 14, 1938, to be exact, a young man by the name of Glenn Andrews walked into Excelsior Seal Furnace Company looking for a job.  Glenn was hired on the spot, and it was Esther’s job to show him around.  The two took a liking to each other, and before the day was out, Glenn asked her out on a date.  Esther excitedly said yes, and Glenn took her to the Aragon ballroom.

Esther and Glenn dated for four years before they were married on January 22, 1944.  Four days later, Glen left for the war.  He served for 27 months in Japan and the Philippines and says that it was the many, many care packages of cookies and candy and letters from Esther that got him through.  When he came back, miraculously “safe and sound,” he and Esther had to “relearn each other” all over again.  Esther had spent the war still living with Verla and Bob, who had not altered their treatment of her despite the fact that she was now a married woman.

When he returned, Glenn got his job back at Excelsior, and he and Esther rented a little apartment on Sedgewick.  Their neighbors were Ada and Dieter Kahler, a German couple with three kids, whom they got to know very well and whom they eventually bought a two-flat with.  Both families lived there for the next 27 years and became best friends.  Glenn and Esther never had any children, so they enjoyed helping with and watching Ada and Dieter’s children, whom they became very close to.

Glenn and Esther were very active over the years in the United Steel Workers Union and served on many, many committees.  They enjoyed visiting with friends and playing poker and loved going to see movies.  Their biggest passion, however, was traveling.  They spent every vacation traveling, and in 1979, when Esther finally retired from Excelsior, after working there for 54 years, they decided to travel full-time.  They spent the next 14 years traveling to such places as New York, Wisconsin, Mexico, Lake Louise, Niagara Falls, New Orleans, Florida, Mt. Rushmore, California, Hot Springs, the Grand Canyon, and many, many more.  They traveled by car, train, and even bus on some occasions.

After so many years of enjoyment with each other, “Esther began to change,” says Glenn, in the early 1990’s.  She became increasingly confused and was often found wandering the neighborhood.  Also, says Glenn, she put on “layers of layers of clothes” and even once chased him through the house with a knife.  Unable to understand her diagnosis of Alzheimer’s, Glenn tried to care for Esther himself for about eleven months before he finally gave in to the doctor’s suggestion that he admit her to a nursing home, heartbreaking though it was for him to be separated from her.

Technically, Glenn still lives in the two-flat that he and Esther purchased with the Kahlers, though only he and Ada are left, Dieter having died years ago and their children having since moved away, but he prefers to spend his days and evenings at the nursing home.  Here he sits with his beloved Esther, 365 days a year, wheeling her about the home, taking her outside to sit in the gardens, or bringing her to various activities.  Esther does not really participate in any of the home’s events, however, and just sits quietly with her eyes closed.  If asked a question, she usually gives a garbled, nonsensical answer.

Glenn does the talking for her as he holds her hand.  He knows every single resident and staff member. He loves to talk to whomever will stop long enough, and especially enjoys telling stories of he and Esther’s traveling days.  When the staff ask him why he doesn’t just make it official and move here, too, Glenn says that he couldn’t do that to poor Ada.  But he remains devoted to Esther, coming every day and always lovingly calling her “my bride,” though he often sadly states that she is just a shell of the lovely, sweet woman she once was.