Forced to Work on a German Farm 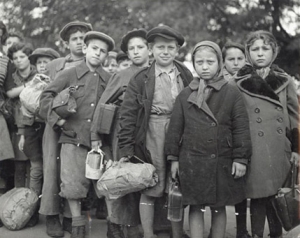 Stefan Zabek was born on May 10, 1914 in Poland to Roman and Olga Zabek.  Roman owned and worked a small farm, while Olga cared for their six children: Stefan and Ada (twins), Teodora, Sara, Waclaw and Renia.  Stefan attended the equivalent of grade school and then quit to help on the farm.  Stefan recalls that his family was very poor, but they were able to eek out a sparse living.   When World War II broke out, however, everything changed.  The Germans eventually invaded, and all six of the Zabek children were taken from Roman and Olga and sent to work in Germany in camps or on farms.  Roman and Olga were allowed to stay on the farm as long as they continued to produce food, which was difficult without any of the children to help.

Stefan, age 25, ended up on a farm working beside other captured persons, one of whom was a young woman, Paulina Bosko, whom Stefan fell in love with.  When the Americans arrived to liberate them, they gave Stefan a job in a hospital in Germany.  Paulina went with him, and they married and made a life for themselves, having two children: Josephine and Stanley.  After twelve years of working in Germany, however, the Zabek’s decided to appeal to the Americans to immigrate to the United States.  They could also have chosen to return to Poland with American help, but they decided to follow several of Stefan’s siblings who had already made it over to either the United States or Canada.

Stefan and Paulina decided to go to Detroit where Stefan’s brother, Waclaw, was working in a factory.  At the time, Josephine was just six and Stanley was four.  Stefan quickly got a job in a factory as a punch press operator, though they only remained in Detroit for one year before deciding to try Chicago.  Stefan got various factory jobs there until he landed a job at the Drake Hotel as a janitor and maintenance man.  Stefan loved this job and remained there for over 21 years, where he enjoyed the reputation of having “a golden hand,” meaning he could fix anything presented to him.  He is very proud of the fact that even after he retired, the staff and managers at the hotel still sometimes called him at home to ask how to fix certain things.

Stefan and Paulina lived in various apartments around Chicago until after Stefan retired, at which time Paulina was diagnosed with cancer.  At that point, they moved in with Josephine, though Stefan says that she drove a hard bargain.  She demanded $300 rent from them per month, and they were required to work around the house as well.  Though she was battling cancer, Paulina had to clean the house and do the laundry, and Stefan had to care for the lawn and garden and do maintenance on the house.  After Paulina eventually died, Stefan remained another year at Josephine’s until he himself began to slow down.  No longer able to do as much around the house, Josephine told him it was time for him to move out.  Accordingly, he moved to an apartment in a retirement community – North Park Village, where he was still able to do his own shopping and banking.  In the three years that he was there, Stefan says that Josephine never once came to see him.  Likewise, he does not seem to have a very close relationship with his son, Stanley.  His children’s lack of involvement in his life and apparent lack of concern seems baffling to him, and he can offer no explanation.

Luckily, however, he was befriended while at the retirement village by a woman named Maria Winograd, whom he miraculously knew from his childhood in Poland.  Her daughter was also oddly named Josephine, and she became like a surrogate daughter to him, helping him with whatever he needed, especially as he grew more infirm and eventually had to be hospitalized.  She also helped with his admittance to a nursing home, which, he says he loves, much to the staff’s surprise.

Stefan is a very sweet, kind, polite gentleman who says he is thrilled to be in a place that cares for him.  “I have no worries here,” he frequently says.  He is delighted to have met fellow Poles and enjoys talking with them throughout the day.  He reports that he hopes he lives a long time yet so he can fully enjoy all that the home has to offer.