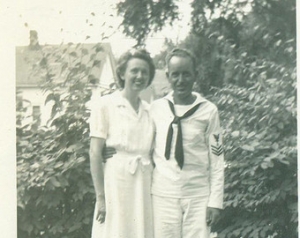 Lois Wright was born on March 23, 1911 in Chicago.  Her parents were Thomas Wright, who was on the Chicago Board of Trade, and Ida Carroll, who stayed home to care for their eight children: Pearl, Thomas Jr., Joseph, Roger, Frank, Mary, Lewis and Lois.  Three of the boys – Thomas Jr, Frank, and Lewis – died in the flu epidemic before Lois was even born.  Shortly after, Ida got pregnant again and, still grieving for her baby boy, Lewis, hoped that she would have another boy so that she could name him Lewis, too.  Disappointingly, however, it was a girl, so they named her Lois as the next best thing.

Lois, it seems, was surrounded by death all her life.  When she was just thirteen months old, her father died of “dropsy,” or “water on the lungs.”  Her mother, devastated and overwhelmed by his death, decided to give baby Lois to Pearl, who had already married and moved out, saying bitterly, “You always wanted a little girl; well, here’s your little girl!”  Unfortunately, however, Pearl died in 1921 when Lois was just ten, and though Lois looked to Pearl’s husband, Earl, as a father figure and her cousin, Doris, as a sister, she was ripped from them when Earl sent her back to live with Ida and her real siblings.  Tragically, in 1924, Ida died, too, leaving the four siblings – Joseph, Roger, Mary and Lois – alone.  They lived together for the next 35 years.

The three elder siblings all got jobs, and Lois, being the youngest, went to high school.  When she graduated, her siblings scrimped and saved to send her to college.  She was able to complete one year at Northwestern, studying personnel, before she had to give it up, as the struggling family just couldn’t afford it anymore.  Instead, Lois got a job as a filing clerk at J. S. Paluch.  She worked there for 28 years, eventually working her way up to being a production manager.

None of the Wrights married, including Lois, but she did, once upon a time, fall in love.  Already in her thirties and beginning to think that romance and marriage had passed her by, she happened to meet a young lawyer, Arthur Cunningham, whom she liked very much.  They began dating and fell in love, but their relationship, it seemed, was doomed because she was a Catholic and Arthur was a Protestant.  Lois’s siblings were furious with her for dating a Protestant and begged and pleaded with her to give Arthur up, as her life would be nothing but misery, they warned, if she pursued a marriage with him.  Arthur’s family, apparently, was no different and likewise urged him to break it off.

The situation came to a crisis when WWII broke out, and Arthur had to leave for the navy.  Still in love, they contemplated getting married before he went, but both families begged for them to “for God’s sake, see reason,” and wait until he came back.  In the end, Lois and Arthur obeyed their families’ wishes and agreed to postpone the wedding until Arthur came home on leave in September of that year.  The wedding was not to be, however, as Arthur was killed in Germany in August.  Lois, understandably, was plunged into despair.

Both families instantly realized their terrible mistake and deeply regretted what they had done.  Poor Lois grieved terribly for her lost love, though both families tried valiantly to make it up to her.  Even Arthur’s mother tried to assuage Lois’s grief by taking her on long trips.  Eventually, Lois says, she had to get over it and go on, but she never fell in love again.

When she was 62, Lois decided to retire early, though all her friends said she was crazy.  Not listening to them, Lois calmly pointed out that her mother and most of her siblings had died from diabetes before they reached sixty, and she wanted to have some fun before her “number came up.”  Thus she quit her job and pursued her hobbies.  She was a lifelong member of various church committees, the girl scouts and loved roller-skating and swimming.  Her real passion, however, was travel.  Over the years, she traveled to every state except Hawaii, which she missed only because she couldn’t find anyone to go with her and she didn’t want to go alone.

After a series of recent falls, Lois decided to go to a nursing home to live and sought the help of her “nieces,” who are actually the daughter and granddaughter of her cousin Doris, whom she grew up with and whom she still calls her “sister,” having stayed close all these years despite being separated at age ten.

Lois is an incredibly alert, intelligent, articulate woman who loves conversation and activities.  She has adjusted well to her new surroundings and is interested in her roommate and all that the facility offers.  She is a very sweet, humble, delightful woman who has tried to make the best of what life offered her.

If you liked this true story, check out Michelle’s historical fiction/mystery series: