Her First Job Was Teaching in a One-Room Schoolhouse 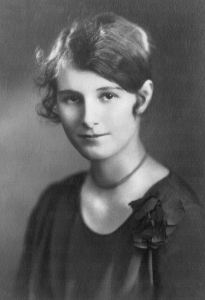 Margaret (Maggie) Devinson was born on January 10, 1902 in Sault St. Marie, Michigan.  Her parents were John Williams and Bridget Kennedy, both of whom were born in Canada.  John was of English descent, and Bridget was Irish (though Maggie never wanted anyone to know that, preferring to call herself English.)  John worked as a machinist for Hicker Brothers, and Bridget cared for their seven children: Minnie, Mary, Margaret, Rudolph, George, Elizabeth and Anne.

Maggie was raised Episcopalian and managed to graduate from high school.  From there she took a summer college course at Marquette.  When the class ended, she returned home and was shocked to discover that while she was away, her mother had applied for a job for her to teach “country school” for the winter.  Maggie wasn’t sure she really wanted to teach in a country school, but her mother insisted, so Maggie dutifully went.

“Country school” turned out to be a one-room school house where she was expected to teach all eight grades, which were made up mostly of farm boys.  Though nervous at first, Maggie grew to love this job and said she learned more teaching this way than from any college class she ever took.  When school finished for the summer, she took another summer class at Marquette and then returned to the country school to teach for the winter again.  Because it was so far from her parents’ home, however, Maggie boarded with families that lived closer to the school.  During her second year teaching, she lived with a French family who insisted she only speak French, so she had no choice but to quickly learn it.

The next part of Maggie’s story is vague.  Apparently, after teaching “country school” for a few years, she either ended up taking classes at the Eastern Michigan University at Ypsilanti or she traveled down to Pontiac, Michigan to be closer to where her sisters were living.  Whichever the case, she somehow met Charlie Sefton, who was attending the University of Michigan and was an up-and-coming musician.  Maggie and Charlie spent a lot of time together, Charlie even teaching her how to play the piano by ear.  Eventually the two fell in love, and Charlie gave her an engagement ring.

At this point, however, Maggie’s parents got involved.  While they enjoyed Charlie’s music, they were very opposed to the marriage.  One evening when she was at home, Maggie’s father pulled her aside and begged her to give Charlie his ring back, stating that as a musician Charlie would no doubt live a “wild” life and would come into contact with all sorts of “seedy” characters. He was worried that Maggie would likewise be pulled into what he perceived to be an underworld.  Heartbroken, Maggie agreed to abide by her father’s wishes and broke off the engagement with Charlie.  She continued to follow Charlie’s glowing big band career all her life, however, cutting out newspaper articles about him and pasting them in a scrapbook.

Time passed, and Maggie eventually fell in love again.  This time with one Phillip Devinson, who was from a very good, old Michigan family and was just finishing up his law degree.  Maggie’s parents very much approved of him, and she and Phillip married when she was just 28.  Phillip decided not to practice law, however, but went into real estate instead and then worked for an insurance company.  Later in life he started his own business.  Maggie, in the meantime, continued to teach, though it was hard to find full-time positions because she didn’t really have a real teaching degree.

The couple started out living near Phillip’s parents but moved to Chicago after about seven years.  It was in Chicago that their only child, Cynthia, was born when Maggie was nearly forty.  The family went back to Michigan for a few years and then came back to Chicago again in 1953, where they bought a house on Jarlath Street in Lincolnwood and remained there permanently.

Maggie found work as both a CNA and a part-time teacher until the school she was working at in Lincolnwood finally told her that they would have to let her go because she did not have a degree.  It was apparently just the motivation Maggie needed to go back to school and finish, as teaching was her real passion in life.  Eventually, she earned her degree and graduated and was thrilled to be allowed to stay on at the school she loved in Lincolnwood.

In 1977, Phillip died of alcoholism.  Maggie’s daughter, Cynthia, reports that Phillip was a very difficult man to live with and that her parents’ marriage was not the best.  Since his death, Cynthia and Maggie have lived together in the same house on Jarlath and have become quite close companions.  Besides teaching, Maggie enjoyed playing the piano, reading, drawing and painting and gardening.

Maggie remained a very independent person until just a few years ago, when, Cynthia says, her mother started getting a bit confused.  Since then, Maggie has begun to need more and more help/supervision, which Cynthia has been able to provide, despite getting on in years herself and having her own health problems.  Recently, however, when Maggie was hospitalized due to a bad bout of the flu and dehydration, Cynthia, facing a surgery herself, was not able to bring Maggie home to care for her.  Instead, she made the difficult decision to place her in a nursing home.  Cynthia feels terrible about the situation, particularly since she says that Maggie was furious and flew into uncharacteristic rages when Cynthia told her at the hospital what the new arrangement was to be.

At the nursing home, however, Maggie is calm and cooperative, though she often seems confused and teary-eyed.  She does not seem to understand her admission and is preoccupied with the belief that Cynthia will not be able to find her here, despite the fact that Cynthia visits often.  Because she believes her stay here is temporary, Maggie does not seem to want to make any lasting relationships with the other residents or join in activities, but instead sits for hours, waiting for Cynthia to come and take her home.