Her Favorite Job Was Working in an Ice Cream Parlor 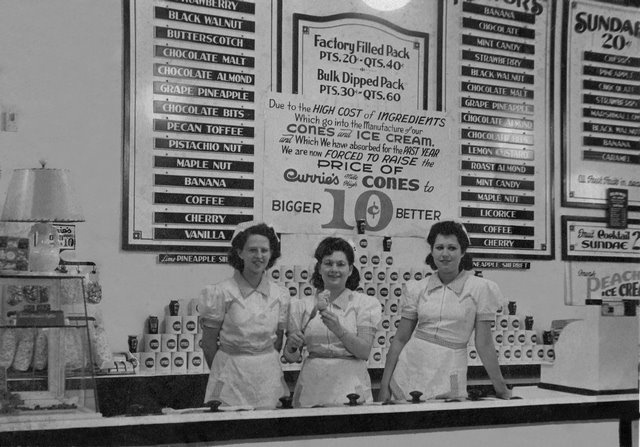 Apolonia Ruzicka was born on March 30, 1914 in Chicago to Jonas Horacek and Marie Blaha, both immigrants from Czechoslovakia, though they apparently met and married in Indiana.  Marie lived with her family in South Bend, where Jonas had also immigrated to and had found a job working for the Studebaker Car Company.  The two supposedly met at a church picnic.  Marie fancied another boy, actually, but Jonas was persistent in asking her out.  Marie finally gave in to him, and the two began dating.  They eventually married and lived with Marie’s parents for several years.  When the depression hit, however, Jonas lost his job, and the young couple decided to try their luck in Chicago.  They found an apartment near Archer and Ashland, and Jonas got a job as a tool and die maker, while Marie cared for their two children, Apolonia and Helena.  Eventually, in the 1930’s, the Horaceks had saved enough to buy a two-flat on 31st Street.

Apolonia only went to school through 8th grade and then got a job at the Schulze Baking Company.  She was always outspoken and loud, the opposite of her younger sister, Helena, so when she announced that she was marrying Frank Marek, a young man she had met at the White City Ballroom, everyone was shocked.  Frank was a quiet man who worked as a mechanic and didn’t seem to mind Apolonia’s strong opinions or outbursts.  After they were married in 1935, they moved into the upper apartment of the Horacek’s two-flat and began a family right away.

Their first baby, Rose, lived for only one day.  Heartbroken, Apolonia and Frank tried again, and Apolonia finally gave birth to a healthy baby boy, James, in 1939.  He was quickly followed by Donald and Leo.  Apolonia stayed home to raise her boys until after World War II when she got a part-time job in the mail order room at Sears and Roebuck, working evenings at Christmas-time.

By the 1950’s, Apolonia and Frank had finally saved enough to buy their own house and moved to Cicero.  Apolonia got a permanent part-time job working the counter at the Prince Castle Ice Cream Co. and was a favorite among the customers.  Tragically, however, in 1958, Frank died of lung cancer at age forty-nine.  After his death, Apolonia could no longer pay the bills just by working part time, so she got a full-time job working as a cook at Morton West High School.  Her son, Leo, says that this was a particularly hard time for his mother, as she grieved not only for Frank, but for her job as well, as she loved working at the ice cream parlor and had made many friends there.

After several years passed, Apolonia was introduced through a cousin to Peter Ruzicka, who worked as a carpenter’s assistant.  The two hit it off and married in 1966.  Apolonia sold her house, and she and Peter bought a different one, also in Cicero.  They were happy together, says Leo, which wasn’t always the case with his mother.  Peter wasn’t the most successful man, Leo explains, but they somehow made each other happy.  It was nice period for her three sons, as she wasn’t as emotionally needy and demanded less from them after she married Peter.  Sadly, however, they did not have many years together, as Peter died in 1978 of heart disease.

After his death, Apolonia lived alone and enjoyed crocheting, knitting, bingo and gardening and remained an active member of the Slovene Center, volunteering over the years for its many Bohemian picnics and dances.  In later years, she also joined the seniors group, The Friendship Club, at her church, Our Lady of Charity.  Apolonia, Leo explains, was always “as strong as a horse,” and never really ill.  Indeed, she has been able to live on her own, even into her eighties, until very recently.

Several months ago, she was found unconscious on the floor of her home by a neighbor, who quickly called an ambulance.  She remained in the hospital for over a month, though the family was never given a straight answer about her diagnosis.  None of Apolonia’s sons live in the Chicago metro area, so it was hard for them to get information or to really assess what was wrong with their mother.  Leo was finally able to fly in from New York and was shocked to find his mom on the psychiatric ward of the hospital.  He also discovered that they had done “exploratory surgery” of her bladder, which had resulted in her being placed in intensive care.

Outraged, the family demanded that Apolonia be released back to her home, which she was, with the help of a caregiver.  After only a few days, however, she was taken back to the hospital due to various complications.  The hospital then discharged her to a nursing home, where she is making a difficult transition.  She is angry and complaining most of the time.  Leo explains that she has always been this way and consequently has had trouble in her latter years making and keeping friends.  “Since she turned eighty,” Leo says, “she’s definitely gotten worse.”  According to him, her depression and irritability has increased, and she has lost interest in a lot of her hobbies.

Predictably, then, Apolonia does not seem to so far enjoy any of the home’s activities and does not seem interested in forming new relationships.  When the staff attempt to interact with her, she either shouts “get out!” when they enter the room, or she pretends to fall asleep while they are talking to her.  It is hoped that she can eventually acclimate, especially as all three of her sons are unable to visit on a regular basis.