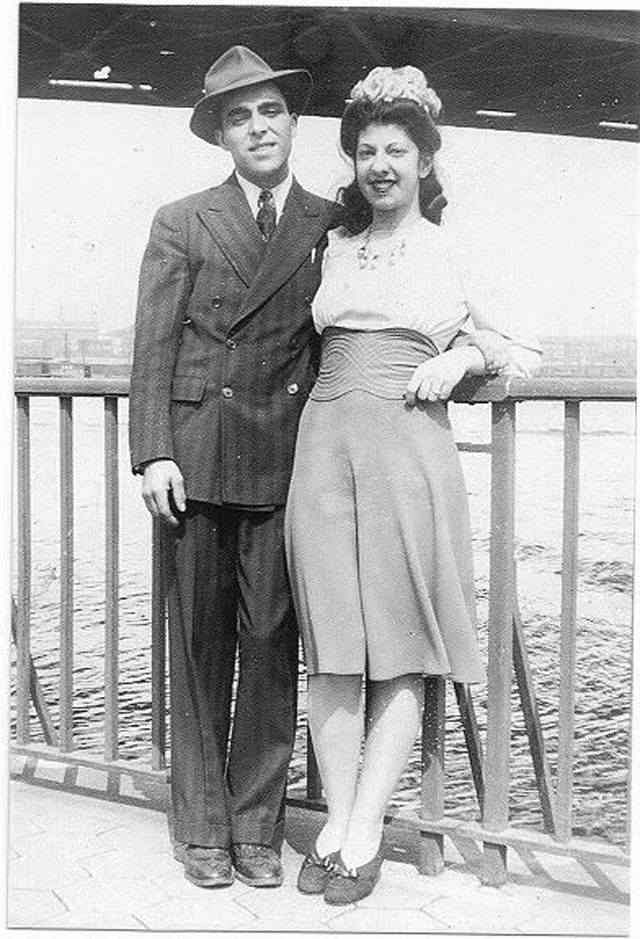 Cleo Newman was born on February 10, 1911 in Kewanee, Illinois to Peter Wyrick and Lorene Crawford.  It is believed that Peter was a Polish immigrant and that Lorene was of English descent.  Peter had apparently been a farmer in Poland and found work on various farms throughout the Midwest after he immigrated here.  Eventually he married Lorene Crawford and was able to buy his own small farm in Kewanee.  While he worked the farm, Lorene cared for their eleven children, only eight of whom lived to adulthood.

The Wyricks were extremely poor, and Cleo only went to school through the eighth grade before quitting to find a job.  When she was 18, she decided to move to Chicago to look for work and stayed with an older sister.  She worked in various factories and restaurants and eventually met a man by the name of Nelson Newman while she was waitressing.

Nelson was older than Cleo and had been married before, but the two of them began dating and were married soon after.  Cleo was surprised to find that Nelson expected her to continue working as a waitress to support them while he went back to school to become a history teacher.  After three years of this, Cleo became pregnant, which infuriated Nelson, as it interfered with his plans of finishing his degree.  When the baby, Marcella, was born, Nelson was forced to stop school and find a job, which he very much resented.  Cleo and Nelson fought constantly, and eventually, when Marcella was just three years old, they divorced.  Nelson went on to finish his degree, become a history teacher, and marry two more times.  He died on Memorial Day in 1984, and Cleo has never ceased to hate him.

In fact, Nelson became Cleo’s focal point for any bad thing that ever happened to her for many, many years.  After the divorce, Cleo moved from Downers Grove back into the city with Marcella where she found work again, but she became increasingly angry and bitter as the years went on.  Marcella says that it was after the divorce that her mother really “went off the wall,” though she was always “a bit off.”  Frequently, Cleo would complain that “everyone says I’m crazy.”  Cleo resented having to care for Marcella, saying that “no one’s going to want me with a kid.”  Marcella always felt “in the way,” and was taught to hate her father, Nelson.  Cleo often told Marcella outrageous stories about Nelson, which Marcella was sure were lies about him, such as the fact that he supposedly held Cleo by the ankles and bounced her on the floor while she was pregnant, hoping she would miscarry.  Marcella, though she was allowed little contact with her father, refused to believe this of him.

As Marcella grew older, Cleo’s relationship with her daughter grew more and more troubled.  Cleo became very suspicious and jealous of Marcella and would accuse her of many, many untruths.  For one thing, Cleo accused Marcella of being jealous of her beauty, though it was Marcella that was growing into an increasingly beautiful girl.  In reality, it was the opposite, Marcella says.  It was her mother who was becoming increasingly jealous of her.  “You could never talk to her,” Marcella adds.  “You could never reason with her.”

When Marcella was in sixth grade, Cleo married a man named Nick Moretti, but by the time Marcella was in high school, they were already divorced.  Marcella thinks it odd that even though Nick was also “no great catch,” Cleo’s anger and bitterness remained directed at Nelson.  Though Nick could be cruel in his own way, Cleo hardly ever mentioned him in her rants, only Nelson, who Marcella believes became a sort of obsessing.  Her mother had other obsessions, too, Marcella reports, one of them being health and fitness.  She became a vegetarian, stopped going to doctors, and did calisthenics, including push-ups, into her 80’s.  She abhorred doctors and claims to have cured herself of various illnesses and injuries, including cancer and a broken arm.  Again, says Marcella, “no amount of reasoning ever worked with her.”

Cleo also became obsessed with Marcella’s social life, limited as it was.  Cleo would constantly chastise Marcella for “sleeping around” and frequently called her a “pregnant slut,” even though Marcella had yet to ever even kiss anyone!  After Marcella finished high school, she got two jobs to try to help support herself and her mother, as Cleo only worked sporadically during those years.  When Marcella would come home late from her night job, Cleo was always waiting there to accuse her of “running around,” refusing to believe that Marcella was actually out working, not out sleeping with a guy.  Finally, Cleo became so incensed at Marcella’s imagined behavior that she kicked her out of the house.

Marcella was then forced to find her own apartment and tried to make a life for herself separate from Cleo.  Eventually, she met a nice man by the name of Joseph Mueller, and they married.  Marcella says that they had to practically beg Cleo to attend the wedding, and when Marcella quickly became pregnant, Cleo’s response was “now she’ll find out what it’s all about to raise a kid.”  As the years went on, Cleo showed little interest in Marcella or her grandchildren, as they came along, and the mother and daughter drifted even farther apart.

With Marcella out of her life, Cleo apparently became even more distrustful and suspicious of everyone around her.  She spent her days riding downtown on the bus, going from lawyer to lawyer, attempting to sue people for stealing her money.  The main recipient of her wrath and blame now became her accountant, one Mr. Shum, whom she decided had stolen all of her money.  She also accused Marcella of somehow conspiring with Mr. Shum to steal her money.  Marcella later laughed at this accusation when she heard it, saying she had never even met a Mr. Shum.  Cleo persisted in her delusion, often saying that “Shum wants to ‘do’ me, though I know he’s already ‘doing’ Marcella.”

When not going from lawyer to lawyer, Cleo also spent time going from bank to bank, opening and closing her accounts, saying that someone had stolen her bank books.  Years later, Marcella found boxes and boxes of old bank books tucked away around the house where Cleo had apparently hidden and then forgotten about them.

Likewise, Cleo began calling the police on a somewhat regular basis, claiming that she had been the victim of a robbery.  Each time the police would come and point out that no locks were broken and no windows smashed.  Still, however, Cleo would insist that something had been stolen, even a small thing like a box of tweezers.  Or she would point to empty hangars in her closet as if to say, “See?  There’s nothing on them, so the clothes must have been stolen!”

The only person in Cleo’s life at this time was her brother, Bill, who had been injured in a motorcycle accident at age twenty-one and who now came to live with Cleo.  “Uncle Bill,” says Marcella, was also “a little on the crazy side.”  Bill lived with Cleo, absorbing her strange stories and theories until he died in the early 1990’s.  After that, Cleo latched onto his daughter, Mary, who, Marcella says, was “easily manipulated.”

After Bill died, Mary indeed became Cleo’s companion and would drive Cleo around to various law offices and banks, still accusing people of stealing from her.  After a couple of years of this, however, even the sweet, gentle, accommodating Mary began to crack under the strain.  Cleo sometimes called her five times in a half hour, wanting something or asking the same question over and over.  Mary also began getting calls in the middle of the night from the police, saying that they had picked up Cleo, wandering, lost, around the neighborhood.  Finally, in desperation, Mary called her cousin, Marcella, to appeal for help.  Marcella, who had been out of her mother’s life for over thirty years, had no idea that Cleo had “gotten so bad.”  She apologized to Mary for Cleo’s behavior and came back into the picture to help.  When the police then began calling her in the middle of the night, she decided that it was time to put Cleo in a nursing home.

Needless perhaps to say, Cleo is very resentful of her placement here and remains angry, disoriented and depressed.  She repeatedly accuses Marcella of dumping her here and complains that “I’m not sick.  I don’t belong here.”  Marcella is concerned for her mother’s safety and security, but is neither emotional nor affectionate with Cleo.  She says that she feels sorry for her, as she has obviously been mentally ill all these years, but she has no emotion left for her mother and does not feel guilty about placing her here.  Cleo refuses to acclimate or meet other residents and switches quickly between extreme anger and tears, often saying “I want to get out of here!”