“It Either Drives You Apart, or It Brings You Together” 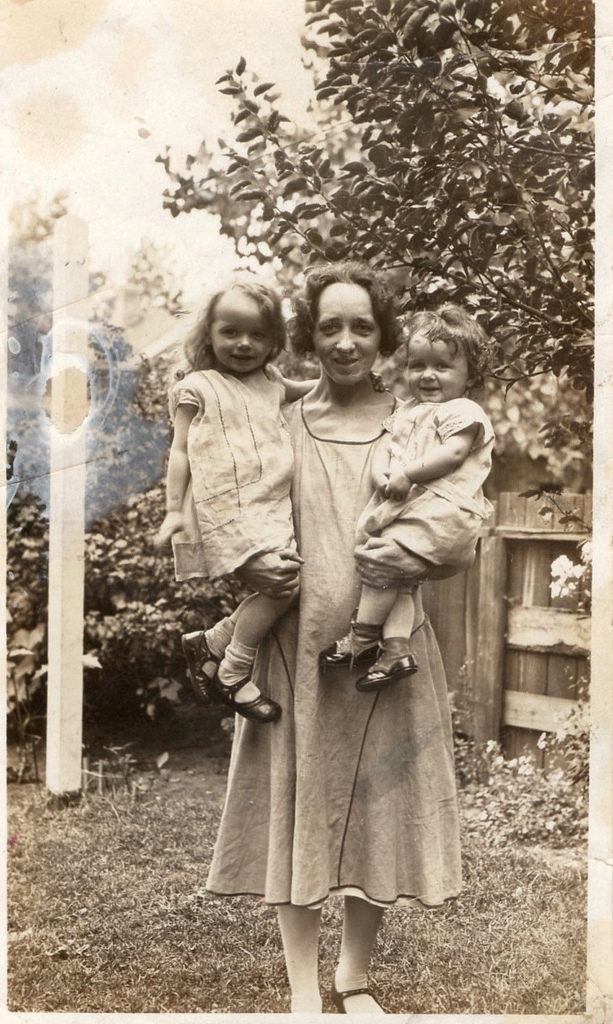 Katie Bohler was born on March 27, 1906 in Chicago to Edward Moran and Bridget Berne, both born in Ireland.  Before Edward, Bridget was was married to another man, Patrick Cooney, while still in Ireland and had two children with him.  At some point, she and Patrick decided to immigrate to America with their two children, Eamon and Mary, but Patrick died shortly after arriving here.  Bridget had a cousin in Chicago, so she made her way there with Eamon and Mary in tow and eventually met and married Edward Moran.  Katie was the only child born of that marriage.

Over time, Bridget and Edward saved enough money to buy a candy shop at Hermitage and 50th, which they both spent years working in.  Edward was actually the cook/baker, and Bridget worked the counter.  Like her older step-siblings, Katie graduated from eighth grade, a fact she is very proud of, even to this day.  Not long after she finished school, however, her father, Edward, died, though no one can remember of what.  Bridget managed to keep the candy shop running on her own, with Katie helping in the shop as well as getting a part-time job at Sears & Roebuck.  Eamon and Mary were already grown and married at the time of Edward’s death, so they weren’t much help in the shop.

When she was just seventeen, Katie married Adam Bohler, whom she knew growing up in the neighborhood.  Adam was of German descent and had gone to school until the 5th grade before quitting to get a job.  Eventually, he found a steady employment working as a mechanic for the city of Chicago, a job he kept until he retired at age sixty-five.

Once they were married, Katie stayed home to care for their children, though only two of their five lived.  Their oldest, Harry, died when he was just two years old of a strep infection.  Katie got pregnant almost immediately after, but she miscarried that baby at six months.  It was another boy.  Their third child, Rose, lived to adulthood, but she died at age twenty-two giving birth.  The baby died, too.  Only their two youngest daughters, Lillian and Eileen, lived.

Katie and Adam apparently had a good marriage and loved each other very much.  Katie says that when you have so many sad things happen, “it either drives you apart, or it brings you together.”  Katie and Adam did not go out much, preferring to stay home most of the time.  Adam loved watching sports on television and was a season ticket holder for the White Sox.  Katie had few hobbies except knitting and embroidery, though she was involved in many groups at church.  Her daughter, Eileen, says that her mother had a reputation at church for “never saying no,” and could always be counted on to bring a hot dish to any event.  For many years, she even coordinated all the funeral dinners at St. Joseph Catholic Church, which was very near their home.  Eileen says that they have a whole closet full of embroidered pieces that Katie worked on over the years but which no one now seems to want.  Both Eileen and Lillian claim to be downsizing their own homes and don’t want extra things, nor do any of the grandchildren want them.

Sadly, Adam passed away in 1987 of cirrhosis of the liver, though it was not caused from drinking, apparently.  Katie remained in their house, pottering about and still attending various women’s groups at church until October of 1993, when she had a stroke and was hospitalized for several weeks.

When she was finally released back home, Eileen and Lillian hired a housekeeper to come in and help her, but Katie proved to need too much care, especially as she seemed very confused at times.  She would often forgot who the housekeeper was and would shout at her to get out of the house.  Not knowing what else to do, Eileen and Lillian sat down with Katie and proposed admitting her to a nursing home.  They say that Katie was very accepting of the decision at the time, but now, however, she doesn’t seem to remember that conversation.  She believes she is only here until her “feet heal,” even though there is nothing currently wrong with her feet.  She says that she is resigned to make the best of her situation until that happens, when “Eileen will come to take me home.”

Katie is a very pleasant woman who loves to laugh.  She is confused at times, but on other occasions, she seems sharp and enjoys interacting with other residents.  She is trying to start an “Irish Singing Club,” which Eileen finds odd, considering her mother was never a big singer in the past.  Still, Eileen is grateful that her mother is interested in something, however peculiar it seems.  Someone from the family visits at least weekly, which Katie looks forward to and enjoys, though sometimes these family visits don’t end well when the relative leaves and does not take her with them.   Overall, however, Katie she is making a great transition.