Eddy Howard and His Big Band Played at Her Wedding! 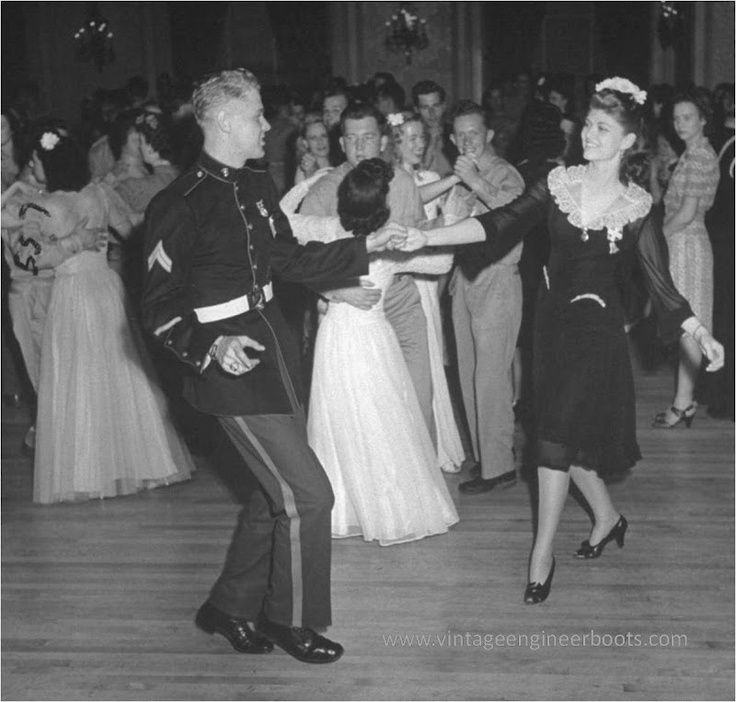 Kristina Abate was born on September 15, 1921 in Chicago to Swedish immigrants, Anders “Andy” and Cecilia Gerhardsson.  Anders worked for the Chicago Tribune in their distribution department, and Cecilia cared for their eight children: Adolf, Emilia, Pelle, Judith, Hanna, Torgny, Walter and Kristina.  All of them lived to adulthood except Hanna, who died of the flu as a baby.  As the youngest, Kristina was very spoiled by her brothers and sisters, all of whom were much older than her.  In fact, she spent most of what seemed to be a happy childhood playing with her nieces and nephews, who were more like siblings or cousins to her.

Unlike any of her siblings, however, Kristina attended high school and then went on to beauty school.  She graduated and became a hair dresser at a little shop on Ainslie.  Kristina was a very social person and had many friends.  She loved movies, music and dancing, and often went to the Aragon and the Merry Gardens to dance.  She had many boyfriends, but it wasn’t until one of her regular customers introduced her to her brother, Peter Petrauskus, that she began to be serious.

Peter’s family were Lithuanian immigrants, but, like Kristina, he had been born in Chicago.  Peter worked at the Brach Candy Factory as a machinist, but shortly after they met, the war broke out and he soon found himself in the marines.  Before he shipped out, Peter asked Kristina to marry him, and she said yes.  Though the wedding was very quickly put together at St. Matthias, all of Kristina’s older brothers and sisters managed to turn it into a big affair with a dinner and a dance, and they even got a well-known big band to play as a surprise for the young couple.  Kristina’s older brother, Walter, was a musician on the side and thus knew a lot of bands, some of them rather famous.  Walter, it seems, called in a couple of favors and was able to secure Eddy Howard and his big band to privately play the wedding!  This was quite a coup, as Eddy’s Chicago shows at the Aragon, The Edgewater Beach Hotel and the Palmer House were frequently broadcast on WGN, and they were a nationally known band.  Kristina, to say the least, was absolutely thrilled and talked about it for years after as the highlight of her life.

Unfortunately, the young couple only had a weekend together and went to Rockford, Illinois for their honeymoon before Peter had to ship out.  He was gone for three long years, serving mostly in the Pacific theater.  During this time, Kristina continued living with her mother and working as a hairdresser.  Her father, Andy, had died years before of a heart attack.

When Peter came home from the war, he got a job at AB Dick.  Apparently, Peter was never a very talkative person before their marriage, but after the war, he was even less so.  Still, he and Kristina seemed to have a relatively happy life.  When she got pregnant with her first child, Edward (whom she supposedly named in honor of Eddy Howard), Kristina quit working to stay at home.  A year later she had Mildred.  Kristina enjoyed being a housewife, but she sometimes missed her clients.  Once a month, she and Peter would host a card club. They also joined and became very active in the Elks.  Her other hobbies were gardening and crossword puzzles.  After only twelve years together, however, (not counting the war years), Peter died of esophageal cancer.  Edward was eleven, and Mildred was just ten at the time.

After Peter’s death, Kristina had no choice but to go back to work.  She found another job as a hairdresser, but it didn’t bring in enough money, so she found a night job at AB Dick.  She went to Peter’s old foreman and begged him to find her something—anything.  The foreman must have felt sorry for her and thus gave her a job in the shipping department.  There were already too many shipping clerks, however, and the other women there resented her, believing that one of them was slated to get fired as a result.  No one got fired, however, and they eventually came to like Kristina, especially since she often worked holidays for them and took the worst possible shifts.

Kristina was determined that Eddie and Mildred would not suffer for their father’s death and worked constantly to “give them everything.”  She even saved enough to pay for Eddie to go to college.  When they were finally raised and gone from the house, Kristina allowed herself to quit AB Dick and work only as a hair dresser, which she really enjoyed.

Despite having lots of friends and still being part of the ladies auxiliary of the Elks, however, Kristina was lonely, so her friends set her up on a blind date with a divorced man named David Abate, who worked as both a civil and an industrial engineer.  David and Kristina hit it off right away, as did Kristina and David’s fifteen-year-old son, Kenneth.  David eventually proposed to Kristina, and they married in 1971.  David and Kristina have apparently had a very good life together, and Kristina and Kenneth became very close as well, something which Edward and Mildred are apparently upset about.

David says that he and Kristina tried over the years to include Eddie and Mildred into their life, but that the two of them remained aloof, despite living in the Chicago area.  When they were together, they often argued, David says.  During one such altercation, David relates, Edward and Mildred accused Kristina of never being there for them during their childhood years.  Stunned, Kristina retorted that she had no choice but to work to support them.  Even after that, however, Kristina refused to be angry with them.  “She would always make excuses for them,” David says, and would deny that she was hurt by them or that there was any kind of problem with their relationship.

In 1987, Kristina was involved in a car accident as a backseat passenger.  She was riding with some friends when they were rear-ended, and Kristina’s ankle snapped.  She spent several weeks in the hospital recovering, but when she tried to go back to her job as a hair-dresser, she found the long hours on her feet too difficult.  Thus she retired early, and she and David began traveling, mostly in the U.S., but once they even ventured to Mexico.

It has only been in the last couple of years that David has worriedly noticed Kristina becoming more and more forgetful.  She lost interest in crosswords and in all of her old hobbies, one by one.  David says she has gotten worse as time has gone on and has even started falling out of chairs for no apparent reason.  He has tried his best to care for her at home, but he is constantly worried she will hurt herself.  So it was with deep regret and sorrow that he decided, with Kenneth’s help, to put her in a nursing home.  Apparently, he once promised Kristina that he would never put her in a home, so he is doubly wracked with guilt over her placement.

Kristina’s transition has been a bit rocky, as she is confused and has a hard time verbalizing her wants and needs.  Often she says “I’m scared,” over and over and indeed looks frightened most of the time, despite the staff’s attempts at intervention and distraction.  She recognizes David when he appears for his daily visit and is indeed less anxious when either he or Kenneth are present.  David is also having a hard time with Kristina’s placement and expresses much anger toward Edward and Mildred.  “She did everything for them!” he says.  “She sacrificed the best years of her life, and this is how they repay her!”  He is so angry at their lack of communication with Kristina over the years, that he is refusing to inform them that she is now in a nursing home.  The support staff are trying to convince him that this is only serving to hurt Kristina, not them, but he refuses to listen.

When David or Kenneth are not around, Kristina seems the most comfortable when surrounded by other residents instead of alone in her room.  She does not actively participate in activities unless someone helps her.  Her favorite activity at the home so far seems to be “Big Band Hour,” but when asked about her wonderful encounter with Eddy Howard, she sadly doesn’t respond.  When any big band songs are played, though, she is able to sing along and surprisingly, despite her memory loss in other areas, still knows all the words.