A Wonderful Father and an All-Round Outdoors Man 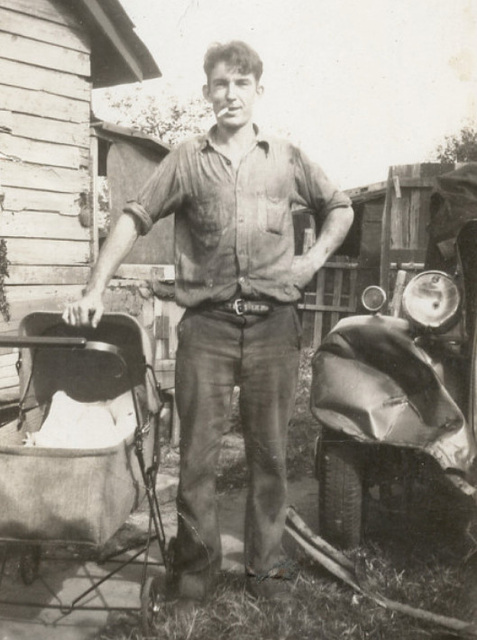 Samuel Werner was born on April 25, 1920 in St. Louis, Missouri to Arne Werner and Kathleen Murphy.  Kathleen was born in Ireland and was just a baby when her family immigrated to Texas.  When she was only three, the family moved again to St. Louis.  Similarly, Arne had been born in Germany, and when he was a small child, his family immigrated to St. Louis as well.  Arne and his brothers grew up in St. Louis and ironically ended up fighting in WWI on the American side.  Together, Kathleen and Arne had ten children.  Only one, James, died in childhood at eight months.

When Samuel was just two years old, the family moved to Chicago where Arne was able to find work as a sheet metal worker. Sam attended grade school and went to high school for a little while before he quit to attend a technical school to learn to be a sheet metal worker like his father.  He was soon apprenticed, and when he completed his apprenticeship, he and Arne went into business together, owning their own shop for 34 years.

Sam’s mother, Kathleen, was never in great health and continued to have miscarriages.  She was over 300 pounds and had what was called “dropsy.”  She died when she was just forty-seven.  It was Sam that discovered her.  He had just come home from buying his sisters their Easter dresses and found his mother dead in her bed.  Arne also died young, at age fifty-eight, of a ruptured spleen.

Sam took over the sheet metal shop and eventually married one of his sister’s friends, a girl by the name of Minnie Kunkle.  He and Minnie had six children: Peggy, Janet, Doris, Gary, Roger and Arnold.  Sam was a very outgoing man who loved music and singing and could play the harmonica, the piano and the organ, all of which he taught himself.  His favorite forms of music were Irish ballads and country music because, he once said, the lyrics of both are so sad.  For a time he even sang in the choir at his church, St. Timothy’s Lutheran, which was very near their house on Armitage.  He was a very outdoorsy sort of man, as well, and also enjoyed hunting, fishing, camping, horseshoes, Ping-Pong, blackjack and sports of any kind.  He had “a real zest for life” and was interested in many different things.

For some unstated reason, his marriage to Minnie did not work out, and they divorced in 1971.  That same year, Sam decided to remodel a building he owned on Belden and hired a woman by the name of Maria Pasternak to come in and varnish the stairwell.  Sam had not met her before, as she had been recommended by someone at work.  He was waiting in the foyer of the building to let her in to start the work, and when he saw her, “something just clicked” between the two of them, Maria says.  She was a divorced woman, twenty years his junior, with three kids.  “It was not an ideal situation by any stretch,” says Maria, but they began dating anyway and married the following year.

Sam helped raise Maria’s three kids: Earl, Patsy and Roy, and became fiercely attached to them, almost more so than to his first six children with Minnie, who had all gone to live with her.  He and Maria had a very close relationship and appear to love each other very much, even now. “He was a wonderful father,” Maria says.  “He never, ever lost his temper” and seemed to have infinite patience.

Sam continued working at his sheet metal shop until the IRS caught up with him in 1985, and he lost it due to back taxes.  It was sold to a new owner, who kept Sam on as an employee.  Sam continued working in the shop for four more years until he quit because his arthritis was getting so bad.  Then, in early 1995, he also lost his building on Belden due to back taxes and consequently went slipped into a deep depression.

Maria believes the stress of these events caused Sam to have a heart attack, from which he spent many weeks in the hospital recoverin.  He was just about to be discharged when his doctor decided to do one more test.  Maria believes that the staff somehow botched the test because during it, Sam turned gray and stopped breathing.  The staff immediately tried to counteract whatever they had done, says Maria, and whisked him off and put him on life support.

Sam spent five weeks in a coma, during which time Maria rarely left his side—talking and singing to him and remembering aloud all of the good times they’d had together.  Indeed, Maria partially credits herself for Sam coming out of his coma, and was overjoyed that he “came back” to her.  He was eventually released to a nursing home to fully recover, but Maria was not happy with the care and has since switched him several times to other facilities.  Twice more he was put on life support, and after the third time, Sam supposedly told Maria, “don’t help me anymore,” which meant, Maria says, that he did not want to “go through all of that again.”  Somewhat reluctantly, then, Maria agreed to put him in a hospice program at his doctor’s suggestion.

Maria seems satisfied with his current nursing care, but she is very sad and depressed, especially as her son, Roy, is also dying of cancer.   She says that she is “utterly heartbroken” and doesn’t know if she has the “strength to go on.”  Sam, meanwhile, does not appear agitated or distressed.  His cognitive level appears to be very poor, but Maria claims he is still quite alert and responds intelligently to her, though the staff has not specifically witnessed this.  Currently, he remains mostly in bed or in one of the day rooms.  He does not interact with the other residents, as Maria rarely leaves his side and tends to speak for him.