“It’s Not The Real Albert” 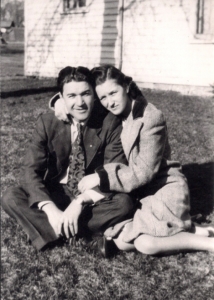 Albert Daelman was born on September 5, 1916 on a farm in LaSalle, Illinois to Ernst and Willemina Daelman, Dutch immigrants.  Ernst was a farmer and was what Albert describes as “a hard-working man.”  His mother, Willemina, cared for their six children.  Albert managed to attend high school for a year and a half before he quit to get a job.  When the WWII broke out, he enlisted in the army and was stationed in the Philippines.

Upon being discharged and returning home, Albert decided to move to Chicago and found work as a machinist in various factories.  At one point, he decided to take a vacation to San Francisco and happened to meet a beautiful young Mexican woman, Benita Caldera, who was also vacationing there.  Albert took her out to dinner and afterwards asked her if he could write to her.  Benita agreed to give him her address, though she had a boyfriend back in Mexico.  She lived in a small town there and worked as a manager of a furniture store. She and her sister lived together with their invalid mother, whom they both took care of.

True to his word, Albert wrote to Benita as soon as he got back to Chicago and continued to write to her every week.  The problem, however, was that his letters were mostly in English with a few Spanish words thrown in for good measure.  Benita was unable to read them, so she had to have a friend or sometimes the parish priest interpret them for her.  Pretty soon the whole village knew of Benita’s American “lover,” which prompted Benita to begin taking English lessons.

Things continued this way until Benita’s mother suddenly died, and Albert went to Mexico to attend the funeral.  He stayed for two weeks, at Benita’s sister’s insistence, so that he could get a good picture, she said, of who they were and how they lived.  It didn’t take long for Albert to propose to Benita, and she accepted him.  At first they planned to get married in her local church, but Albert refused to pay the steep fee the parish priest was requiring, so they went to Chicago and got married at St. Viator’s.

Benita tried hard to adjust to her new life in America, but it was difficult at first.  She says that a German couple who lived next to them were very kind to her, but even so, each evening she would sneak out onto the porch and cry with homesickness.  Eventually Benita got used to being Albert’s wife, however, and things settled down.  She managed to get a job working in accounting at the Lions International Headquarters, and Albert continued working as a machinist, his longest employment being with Victor Products.  They never had any children, though Benita says she would have liked to.

Benita vehemently states that Albert was “a good, good man—an honest man,” but, she adds, “he was not very friendly.”  Albert, she says, had “a complex” about being around people.  He was very shy and nervous and angered easily.  Benita says that he had no hobbies and no friends and dealt with stress by drinking a lot and complaining about every little thing.

His routine was to go out to the local tavern on Friday nights after work, where he proceeded to drink away the majority of his paycheck.  When he came home drunk, Benita would put him to bed and then go through his pockets to see if there was any money left.  This went on until he retired, and Benita finally persuaded Albert’s doctor to tell him that if he didn’t stop drinking he would die.  Apparently, this convinced Albert, and he stopped drinking cold turkey.  Albert went on to get a job as a security guard at Colonial Bank on Belmont, where he worked for five years until he was diagnosed with lung cancer.

Despite having treatments, Albert’s lung cancer has spread to his brain, which seems to have further effected his personality and has caused him to be disoriented and confused.  Benita tried to care for him at home for several years, but when Albert became at times verbally and possibly physically abusive to her, she could no longer cope.  Not knowing what else to do, Benita recently placed him in a nursing home, which he is not adjusting well to.  He continually blames Benita for bringing him here and becomes agitated whenever she visits.  Indeed, on one occasion, he attempted to strangle her.  His two obsessions seem to be sneaking off to bed or repeatedly saying “get me out of here.”

All of this is particularly hard on Benita, who claims that she loves him still, despite his verbal abuse.  “It is not the real Albert,” she says, and is overwhelmed with grief and guilt that she cannot help him more.