The Colorful Life of Irene Diefenbach 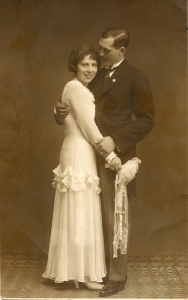 Irene Diefenbach was born on September 2, 1910 in Pennsylvania to Slovak immigrants, Karol and Danica Dalibor.  The Dalibors worked on a small dairy farm, but when Irene and her two siblings were still very young, the family moved to Phillips, Wisconsin, which had a large Slovak population and many dairy farms in the surrounding area.  Karol was able to purchase his own farm there, which Danica helped to run.

Irene attended grammar and high school, but as there were few job prospects for her in Phillips, it was decided that she should go to Chicago to find work.  Somehow it was arranged that she would stay with an old German lady, a Mrs. Glockner, who lived on the Southside, and that she would work cleaning houses for the wealthy residents of the North Shore.  In her free time, Irene also attended a design school to learn how to design clothes.  She became quite skilled at this and actually designed some dresses for Mrs. Glockner and her friends.

Irene was apparently very attractive in her day and had many beaux and would-be suitors.  She was forever going on dates, and thus Mrs. Glockner established a protocol that Irene agreed to follow.  Irene’s date for the evening was required to pick her up at Mrs. Glockner’s at exactly 6:15 and sit for a time and make polite conversation before he was allowed to leave with Irene.  The next morning, Irene would then tell Mrs. Glockner all about her evening out, and then the two would proceed to discuss the pros and cons of the young man in question.

One time, so the story goes, Irene brought home a young man by the name of Gilbert Diefenbach, whom Irene thought so boring on their evening out that she didn’t even plan on discussing him at breakfast the next morning.  So she was surprised when Mrs. Glockner announced, based on her conversation with him the night before, that he was the one Irene should marry.  Irene was stunned by this announcement, but she regarded Mrs. Glockner’s opinion so highly that she reluctantly gave Gilbert another chance.  Apparently, he was not as boring on the second date, and they began seeing each other regularly.  They eventually married in 1939 when Irene was 29 and Gilbert was 32.

The young couple moved to what was then a little country town called Mount Prospect, Il. and there had their first baby, Phyllis.  Following Phyllis, Irene had three miscarriages before she finally gave birth to another daughter, June.  Right at about this time, Irene’s parents’ health began to fail severely, and Karol found he could no longer farm.  Gilbert himself had grown up on a farm, so he suggested that he and Irene and the two girls move up to Phillips to help her parents and to hopefully prevent the farm from being sold.  Irene and Gilbert tried their best for four years to make the farm a success, but it was too difficult for Gilbert to do on his own and they couldn’t afford outside help.

Eventually, the farm was sadly sold, and the Diefenbachs moved back to Chicago and found an apartment in Andersonville.  The building they moved into was nicknamed “The Castle” and was apparently very beautiful.  The Diefenbachs rented the first floor apartment, which happened to be where the door to the cellar was located.  Apparently, the woman who had previously owned the building had made her own liquors in the cellar during prohibition and had thus converted it into a huge wine cellar.  When the woman vacated the building, she apparently left behind all the wines and liquors, assuming they had all spoiled, as did everyone else.  Irene, however, was determined to investigate herself and took great delight in finding many “hidden treasures.”  As predicted, most of the wine had indeed spoiled, but he did come across some excellent cherry cordial.  She says they were an excellent vintage and used most of them as gifts over the years.

After June was born, the doctors told Irene that she shouldn’t have any more children, as it would be too risky, but seven years later, Sophie was unexpectedly born.  Irene was happy staying home with her girls while Gilbert worked as an insurance salesman.  Irene was a very active member of the community and of her church, St. Joan of Arc.  She was a member of various groups at church, a ladies Slovak union, a neighborhood gardening club, and was a leader in the Girl Scouts.  She designed and sewed all of her own clothes, as well as those of her daughters’, and loved dancing, music and intellectual conversations.

Life went along swimmingly until 1963, which proved to be a difficult year for Irene.  Not only did Gilbert pass away that year, but Phyllis got married and moved to New York.  The following year, June got married and subsequently moved to Boston, leaving Irene and Sophie alone.  At that point, Sophie was in high school, and Irene didn’t like sitting around the house alone.  She decided, then, to go back to work and easily got a job at Marshall Field’s doing alterations.  In addition, she produced her own designs on the side and also worked as a  swimming instructor. Later she left Fields for Carson’s, where she worked until 1970, when Sophie got married and moved away, too.

Irene was sixty when Sophie got married.  She was quite willing to live independently, but Phyllis persuaded her to come and live with her and her husband, Dave, in New York, as she was worried about her mother living alone.  Irene agreed to come, but she insisted on driving her car all the way to New York so that she would have a means of transportation at her disposal once she got there.  Irene enjoyed New York, but after only a couple of years, however, Dave was transferred to Naperville, Illinois, causing all them to relocate yet again.  Rather than again move in with Phyllis and Dave, however, Irene decided to get her own place at Four Lakes in Lisle, where she happily remained for fourteen years.  In that time, Phyllis and Dave were transferred again, this time to Washington, but Irene remained behind in Lisle.

In 1980, Irene suffered a stroke, which paralyzed her whole right side.  She was determined, though, “to make a comeback” and live independently.  Amazingly, she did indeed learn to walk, read and write all over again and even managed to make a wedding dress for a family friend, a huge personal achievement.

Irene remained on her own until 1993 when she began to finally need more assistance.  Sophie helped her to move into a retirement complex, but Irene hated it there.  Though she herself was eighty-three, she was disgusted that she was surrounded by “old people” and became depressed.  Her daughter, Sophie, believes that this was “the beginning of the end.”  At the retirement home, Irene experienced six more mini-strokes and a seizure.  Likewise, while attempting to get out of bed one morning, Irene fell and fractured several vertebrae.  She was transferred to the hospital and then released to a nursing home under hospice care.

Irene is currently not able to communicate very well, though she seems alert.  Sophie is convinced that her mother does not realize she is in a nursing home and that it would “instantly kill her” if she knew.  Sophie is racked with guilt and sorrow regarding the whole situation and continuously urges the staff to provide intellectual stimulation for her mother.  Irene, for her part, when awake, seems very pleasant and amiable and is happy with whatever is given to her.  “She was a wonderful mother,” Sophie says of Irene and that she was “everyone’s best friend.”