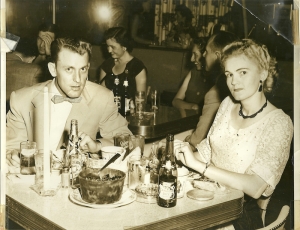 Carl Nilsson was born on January 24, 1937 in Chicago to Nils Nilsson and Brita Lindgren. Not much is known about Carl’s early life or his parents, except for a few facts, namely that they were immigrants from Sweden and that Nils worked as a tool and die maker once he got to Chicago.  Carl describes his father as a workaholic.  His mother, he says, was primarily a housewife, but worked occasionally as a waitress for the private parties of the Kemper Insurance Company.  Carl was their only child.

Carl attended college for three years and then got a job working in personnel at a paint factory.  Over the years, he worked his way up the corporate ladder until he became vice president of the company when he was around forty years old.  He was apparently a very fashionable, successful executive who loved to party.  He married a woman named Judy Breitbach and had one child with her, Patricia.

As Carl’s career expanded, his lifestyle apparently became more and more lavish.  He bought a big house in Park Ridge and filled it with expensive, custom-made furniture.  He had “liquid lunches,” big parties, closed the bars down at night and belonged to the country club.  He was the classic “high-society” man and belonged to many different community organizations, such as the Elks and the Moose.  He was also a member of a Swedish choral group and sat on the board of directors at the Swedish Museum, among many others.

Carl’s extravagant lifestyle all came crashing down, however, when the company filed for bankruptcy and Carl lost his job.  Though he tried for a while to find a comparable position in another company, he wasn’t successful, partly perhaps because he was thrown into a deep depression.  He grieved for his lost job and what he saw as his place in society and slowly began to withdraw.  His participation in his many community organizations dwindled, and his marriage to Judy began to fall apart.  He began drinking even more than he had before, until Judy eventually divorced him, taking Patricia and moving to Texas.  This was the last crushing blow for Carl.

He eventually had to sell the house and moved into a “trashy” apartment where he further “drank his life away” and developed diabetes.  He remained in denial about his diagnosis, however, and eventually had to have one leg amputated.  He was working for Carson, Pirie, Scott at the time but eventually lost that job as well when he had to have the other leg amputated, too.  Completely handicapped now, he went on full disability, though he continued to make some money “under the table” by occasionally working for a travel agent.

It was after his second amputation that he had to spend some time in a physical rehabilitation center to learn how to care for himself now that he was a double amputee.  At the rehab center, Carl had the good fortune of meeting and becoming friends with a man named Steve Hinkel.  Steve was a volunteer at the center who often came to give motivational talks and workshops for both patients and doctors based on his own life experience.  He himself had been in a serious car accident when he was twenty-eight years old and had almost froze to death.  He lived through the ordeal, but he lost his hands and feet as a result.  His recovery from the accident, however, was amazingly quick, which he still attributes to his positive attitude.

Carl was instantly attracted to Steve’s positivity and became very attached to him.  Steve spent many hours talking with Carl while he was in the rehab center and even helped him get settled back into his apartment once he was released.  Steve continued to visit and follow up with Carl, who was still abusing his body by eating anything he wanted and consuming large quantities of alcohol.  Often Carl would ask Steve to take him out to lunch, where he would proceed to order drinks, though Steve cautioned him otherwise.  “Oh, a little nip once in a while won’t hurt me,” Carl would say.  If Steve pressed him to stop, however, Carl would argue, “What does it matter?  I’m going to die anyway.”

Steve describes Carl’s apartment as “dirty and run-down” and perpetually looking like “it was ready for Halloween with an orphanage next door” in terms of how many cakes and sweets littered it, as well as bottles of liquor and trash.  Amongst all the rubbish, however, was a little “shrine” that Carl had erected to his daughter, Patricia.  Though his wife had full custody over the years of Patricia, Judy allowed her to spend the summers in Chicago with her father, which Steve guesses was the only thing that kept Carl going for years.  Indeed, the only “décor” in the apartment consisted of photographs and clippings of Patricia and her many accomplishments.

At one point, worried about her father, Patricia even transferred to DePaul for her junior year of college so that she could be closer to him.  It proved to be too much for her to handle emotionally, however, and she eventually returned to Texas.  She still maintained contact with him, however, as the years went on, calling him weekly and occasionally coming up to visit.  Patricia is married now and still living in Texas, but she has flown up several times during Carl’s various hospitalizations.  She has also been able to meet Steve and has thanked him for helping her dad and for keeping her updated on his situation.

Carl’s condition worsened recently when he began experiencing “weird spells” and was again hospitalized with heart and lung problems.  He was also diagnosed with kidney failure and potentially prostate cancer, though it was inoperable because of his bad heart.  At the hospital, he was counseled about changing his bad habits, but he threw many tantrums in which he demanded milk and cheese to be given to him, claiming that they were the “proper food for a Swede.”  After this extended stint in the hospital, Carl was eventually allowed to go home with the help of home health care, but it only lasted a couple of months before he ended up in the hospital again.  This time, Steve, with Patricia’s long-distance help, was able to help get him admitted to a nursing home.

Carl’s physical health has stabilized since his admission to the home, but he is very confused and distraught and is not adjusting well.  He seems to have lost the will to live, and remains belligerent and temperamental.  He fights with the staff when they attempt to get him out of bed, saying that it is “cruel,” and that “you’re all the same!” or “no one cares!”  Similarly, he continues to throw tantrums in which he demands milk and cheese three times a day, against the dietitian’s advice.

Besides these loud outbursts, he otherwise remains despondent and depressed most of the time, even when Steve comes to visit.  It is very difficult to have a conversation with him as he frequently “drifts off” mid-sentence and never gets back to his original thought, even when prompted.  He continues to ask for Patricia and begs to be allowed to die.  Steve continues to visit, despite his own handicaps, and tries to encourage him to participate in the life of the home for the time he has left.