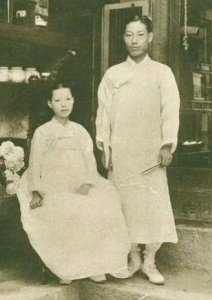 Mi-Jeong Kuk was born on January 7, 1909 in Korea.  Her father, Won-Shik Kuk, was a poor farmer and her mother, Seo-Jin Kee, raised three children: Mi-Jeong and her two brothers.  Mi-Jeong says that in Korea at that time a wife did not take her husband’s name, but kept her own.

All three children, of whom Mi-Jeong was the youngest, worked on the farm and received rudimentary schooling.  Mi-Jeong received the equivalent of a grade school education, after which she was arranged to marry a wealthy man, Nam-Jun Paek, who owned a lot of property and had a big house.  Mi-Jeong was not entirely pleased with the arrangement, but she did not dare say anything because she knew her family needed the dowry money that Mr. Paek had offered them.  Accordingly, the two were married; Mi-Jeong was just 15, Nam-Jun was 29.

Within the first year, Mi-Jeong had a baby, but she was forced to give her daughter to her older brother and his wife, who couldn’t have any children of their own.  Mi-Jeong says that this was a common practice in Korea.  She eventually had two more children, a girl: Kyung-Eun and a boy: Mu-Hyeon.

Not long after her son was born, Mi-Jeong’s husband took another wife, which was his privilege because he was a wealthy land-owner.  Mi-Jeong explained that only rich men could have more than one wife because they were the only ones that could afford to pay more than one dowry.  Apparently, Nam-Jun took many wives after Mi-Jeong, which caused her much sorrow and distress.  She was nervous and anxious most of the time and spent her days cooking and weaving silk and cotton, trying her best to stay in the background.  She says that Nam-Jung was not abusive, per se, but that her heart was broken and she could not cope well with the other wives.

The years passed, and eventually both of Mi-Jeong’s children immigrated to the United States and settled in Chicago.  Once they were established there, they wrote to Mi-Jeong and urged her to come to America to help them raise their own children.  Mi-Jeong was happy to have a reason to get away from Nam-Jun and accepted their invitation.  When asked about Nam-Jun, Mi-Jeong says that she thinks he is still alive, but she isn’t sure.

Of her first daughter whom she gave to her brother, Mi-Jeong knows little.  She is thankful that she got to see her grow up, though at a distance, but she has lost contact with her now.  Mi-Jeong says that she is no longer sad about it, but that it was very hard at first.

Once in America, Mi-Jeong spent the next years living in her own place near her children and became heavily involved in watching her grandchildren.  Over time, her anxiety seems to have lessened, and she has always turned to weaving as a hobby and a form of relaxation.  In the last two years, she has gone to live with her son, Mu-Hyeon, as she was falling a lot and finding it harder to live alone.  Now that her memory appears to be going as well, Mu-Hyeon became increasingly worried about leaving her alone while they were out.

In desperation, Mu-Hyeon and Kyung-Eun brought Mi-Jeong to a nursing home, where she seems to be adjusting well.  She appears a bit fearful, but has found a few residents who speak Korean and also enjoys talking to the Korean nurses on staff.  Though her eyes often look anxious as she makes her way, carefully, around the facility, she always has a smile and eagerly grips the hand of whomever stops the greet her.  “I have had many sorrows,” Mi-Jeong once said through an interpreter, “but much joy, too.  It’s time for me to descend and my grandchildren to rise.”