A Brilliant Team—Married for 65 years! 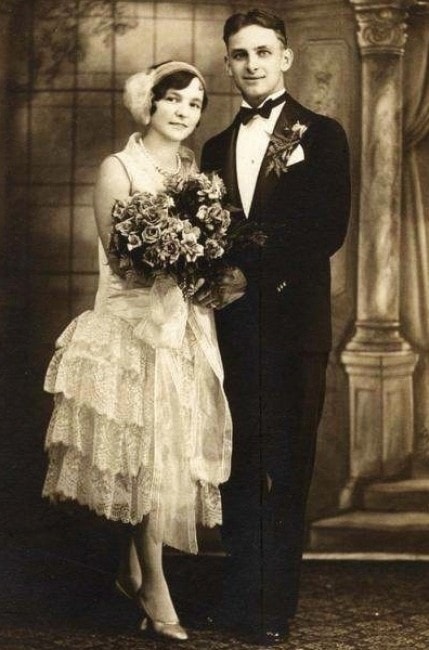 Jan Marek was born on October 13, 1903 in Chicago to Zavis Marek and Valerie Reha.  Zavis and Valerie were both immigrants from Czechoslovakia, but they met in Chicago and married here.  Only three of their children lived to adulthoood: Jan, Victor and Teresa.  Jan says that he often heard whisperings that his mother had experienced six miscarriages, but both of his parents refused to talk about it, even if asked directly.  They also refused to talk about their life in Czechoslovakia.

Zavis owned a butcher shop, which the whole family helped to run, on Chicago’s northwest side.  Jan and Victor worked there from a young age, and Jan had to learn to kill chickens, ducks and geese even as a little boy. Jan says it was “hard, hard work,” especially before they had refrigeration or automobiles.  Neither Jan nor his brother Victor enjoyed working as butchers, and one day, they finally worked up the courage to tell Zavis that they had no desire to inherit the shop or to help keep it running once they were grown.  Zavis was apparently very saddened by this news, but he agreed to let his sons pursue their own livelihood.  When it was time for him to retire, he sold the shop instead of passing it down to them.

Once Jan graduated from eighth grade, he got a job delivering groceries, and his parents made him pay room and board from that point on.  Jan worked hard, however, and managed to still save some money, even after having to pay his parents most of his salary.  He continued to get various jobs, each one paying a little bit more, until, when he was twenty-one, he had saved enough money to put a third down on a hardware store.

Thus, young Jan became the proud owner of a hardware store, and he put his all into making it a success.  He was a very social young man and knew how to treat customers from his many years working in his father’s butcher shop.  He loved board games and sports and had a lot of friends.  He was usually “the life of the party,” and could be found playing the piano and singing and dancing at get-togethers.  It was at one such party at a friend’s that he was introduced to a young woman, Sonia Dusek, and the two immediately hit it off.  They dated for a year and then got married and moved into the apartment above the hardware store.

Jan and Sonia were a brilliant team, apparently, both of them working very closely together to make the store a success.  They worked hard all day and then would lock up the shop at closing time and go out dancing or catch a show.  They both loved movies and saw almost every one that came out.  They were always socializing with friends or family and often went to Jan’s parents to play cards.

The Mareks never had any children, however.  Even though they were a very close couple, Jan says they never really discussed it.  To his understanding, Sonia never really wanted any children, speculating that it might have had something to do with the fact that she was from a big family.  “It was probably for the best,” Jan says now, though there is perhaps the tiniest hint of regret in his voice as he tells this part of his story.

When they were just short of fifty years old, Sonia one day declared that they should sell the hardware store and retire early.  Jan was caught off guard by this sudden announcement, but after he had “time to think about it,” he decided that it wasn’t a bad idea.  So they put the store up for sale, and it sold very quickly.  The Mareks then bought a small bungalow on Pulaski Avenue to move into, having to give up their little apartment above the shop, and then began traveling.  They also continued to go out dancing and to movies as well as to socialize extensively with friends and family, including Jan’s parents, whom they saw each week to play cards with.

Jan’s father, Zavis, died when he was eighty-six of esophageal cancer.  He had been diagnosed with it two years before, but refused to have any kind of treatments.  He died after a night of card-playing with Jan and Sonia.  As he was going up to bed, he had a horrible coughing fit, and as Jan helped him to bed, “both of us knew he wasn’t going to make it through the night,” and they said their goodbyes.  Jan’s mother, Valerie, then came to live with Jan and Sonia for the next fifteen years.  She died at age one hundred in Jan’s arms.

Jan and Sonia continued to live in the bungalow on Pulaski until their own health began to fail.  At that point, Sonia proposed that they move to the Momence Retirement Center in Momence, Illinois, where one of her sisters lived.  Jan agreed to go, and they attempted to start a new life there.  After only one year, however, Sonia passed away.  She and Jan had been married for sixty-five years.

It was Sonia’s last wish to be buried by her parents in the Bohemian National Cemetery in Chicago, so Jan honored that with the help of the staff at the retirement community.  Not wanting to return to Momence to live, however, without Sonia, he decided to move to a nursing home near the cemetery.  He was able to do this mostly on his own, despite being ninety-one years old, though he had some help from his niece, Donna, who flew in from Seattle, Washington to help him get situated.  She is his closest relative and is concerned for her Uncle Jan, but she is obviously not able to participate very much in his care.  Jan remains very independent, however, and much of the admission process was handled by himself.

Jan is making a relatively smooth transition to nursing home life, though he is somewhat quiet and withdrawn.  When asked, he says that he still misses Sonia, but he is “trying to make the best of it, the way she would have,” he says.  He interacts well with other residents one-on-one, but seems to shy away from big group activities or events, saying his eyesight is too poor to enjoy much.  He does still love music, though, and can often be heard singing to himself.