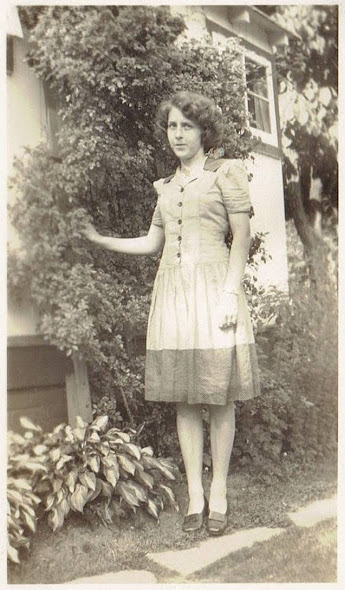 Iveta Prochazka was born on February 8, 1923 in Czechoslovakia to Adam Klima and Bozena Pesek.  Iveta was the youngest of three children, her older siblings being Radana and Rudolf.  It is unknown what type of work Adam did, as he passed away when Iveta was just four years old.

Left to raise her three children alone, Bozena decided to flee to West Germany when World War II broke out to escape being sent to Siberia by the Russians.  Not much is known about their life there or how they survived.

All that is known is that in 1957, Iveta was able to immigrate to the United States with three of her friends.  They arrived in Chicago and stayed for a time with a relative of one of the girls—a cousin by the name of Bessie, who was married and had five children.  Bessie and her husband allowed the girls to stay for a couple of months but then told them that they would eventually have to find their own place, as they didn’t really have room for four extra people to stay there permanently.  Iveta found work as a cleaner at a hospital and was looking for a place to stay when she was introduced to a young man, Martin Prochazka, through a friend of Bessie’s.  When Martin learned of her story and predicament, he offered to let her stay at his place.

Iveta was reluctant to stay alone with him, however, so Martin told her she could bring along one of the other girls she had immigrated with.  Before long, however, Iveta and Martin began “dating” and often went dancing together, which Iveta seemed to like.  After a couple of months, they married.  Martin now says that it is the worst decision he ever made.  He felt sorry for Iveta, he says, who seemed so scared and alone when they first met.

Martin himself had already known some heartbreak.  He, too, had been born in Czechoslovakia and had a wife and daughter there.  When the war ended, he tried to persuade his wife to leave Europe and go to America with him.  She adamantly refused, but Martin wanted to leave so badly that they decided to divorce.  He arrived in Chicago in 1947, looking for work and a new life, and was shocked to discover that American girls “snubbed” him because he was divorced.  He eventually found a job with the railroads and spent ten years working there until he was introduced to Iveta through a mutual friend.  His heart, he says, went out to her instantly.  He offered to marry her because he wanted to “help her and take care of her.”

Almost immediately, however, Martin noticed that Iveta was somehow “not right.”  He initially put it down to living for so many years in Germany and being brainwashed by “Hitler’s philosophies.”  She had bizarre, emotionless behavior, he says, and claims that in all the years of their marriage, she had no interest in anything.  She never once cooked, sewed or cleaned, and never once cried.  He says that she spent her days lying on the couch, listlessly chain-smoking cigarettes.  This went on for years and years, until Iveta suddenly became violent.   Martin says that she beat him up on several occasions and that she even once tried to kill him by setting him on fire.

Martin says he attempted to divorce her, but was told he could not legally divorce a mentally ill person.  Somehow he was able to then get Iveta to see a psychiatrist, who diagnosed her with schizophrenia and put her in an institution.  She “escaped” however, and returned to live with Martin, who says that his life with her was “a living hell.”

This horrible life continued until very recently when Iveta was admitted to a hospital because she was having difficulty breathing.  She was diagnosed with COPD and put on a respirator at the hospital.  The staff told Martin to prepare himself for her imminent death.  When they removed the respirator, however, Iveta surprised the medical staff by not dying.  She was eventually then discharged to a nursing home, where she now requires 24-hour care.  Most of the time she is unresponsive, but when she is awake, she is withdrawn and uncommunicative, except to insist on smoking in the smoking room, despite her near inability to breathe.

Martin, meanwhile, is having a very difficult time coping with Iveta’s admission.  He was prepared for her death and was relieved at the thought of finally being free of her.  Now that she has survived, however, he is anguished that his life with her still really isn’t over and feels immense guilt for wishing she had died in the hospital.  He cries frequently whenever he visits and seeks out the staff to talk to, his main topic being his many years of misery with Iveta.  Iveta, on the other hand, has no reaction to Martin’s presence and shows no emotion at all.