She Was Born and Lived in the Same Apartment for Over 80 years! 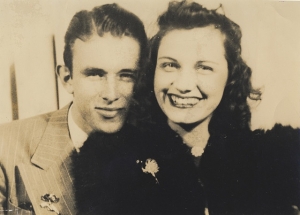 Edith Wojewodika was born on February 7, 1915 in Chicago.  Her parents were Eluf Akselsem and Britta Dam, both immigrants from Denmark who met in New York shortly after arriving in America.  They married three weeks later, much to the surprise of those who knew them.  Everyone said they were crazy and that it wouldn’t last.  Eluf and Britta were happy, though, and decided to move to Chicago, where they both found jobs cleaning offices for the telephone company.  They found an upstairs apartment in a two-story bungalow on Ohio Street, which they rented for many years until they could afford to buy the building itself from the money they managed to save.

It is said that Britta had nine miscarriages before she was able to give birth to five children: Anna, Otto, Ruben, Viggo and Edith.  Britta continued working as a cleaner on the night shift even after all the children were born, while Eluf worked the day shift so that someone was always at home with the children.  This arrangement worked until Eluf suddenly died of a heart attack at age 48.

Though Edith was only in seventh grade at the time, she quit school to get a job to help bring in money for her mother.  She lied about her age and used her sister’s name to get a job at a factory making bobby pins.  She worked there for several years until she quit to work in other factories.

In 1936, when she was 21, Edith married the boy next door, Paul Wojewodika, whom she had known all her life.  Though he was four years her senior, they had always been friends.  Edith says, “I never thought of him in a romantic way,” so she was very surprised when one day he asked her out on a date.  She didn’t know what to say, so she said yes, not knowing what to expect.  Paul told her that he had been in love with her “forever” and wanted to marry her.  Edith wasn’t sure how she felt at first, but agreed to go on more dates with him.  Eventually she fell in love with him, too, and they were married.

After the wedding, Britta decided to move into the downstairs apartment of the bungalow, as she had developed arthritis and found climbing the stairs to be very painful.  All of the other siblings had already married and left, so Edith simply remained in the upstairs apartment and Paul moved in.  Paul and Edith lived in that same apartment their whole married life and made many changes to the structure over the years, including installing a water heater and bath tubs.

Paul worked for Western Electric until it closed down, at which point he got a job at a plating company. Upon getting married, Edith did not go out to work.  She miscarried several times and then began having “complications.”  Finally the doctors advised a hysterectomy, which was very hard for Edith to accept.  She really wanted children, but it seemed it was not to be.  Eventually she grew bored of staying home alone, so she got a job at American Color Type making Christmas cards.

Edith was very active in her parish of Holy Innocents, though she was also involved at the nearby St. John Cantius, as well.  She was likewise the member of the Welfare Club, which helped orphans needing clothes for their First Communion or other holiday occasions.  She loved to bake and was actually quite famous in the area for her carrot cake.  She loved to go dancing, though Paul was not too keen.  Often he would take her to a dance hall, where she would dance with other people.  Apparently Paul did not seem to mind this, frequently telling her, “I don’t mind who you dance with, just as long as you remember who you came with!”

When Edith’s mother, Britta, passed away, Edith’s sister, Anna, and her husband, Oscar, moved into the downstairs apartment.  Not long after, Anna died as well, so Dorothy, Anna and Oscar’s daughter, moved in to help care for Oscar, who needed a lot of help and could not be on his own.  Edith says it was a blessing because the very next year, Paul died, too, and it was a very great comfort to have Dorothy living just below.  Even so, Edith took Paul’s death very hard, as they were terribly close.  They had known each other almost all their lives and had done everything together.  Edith describes Paul as being a very sweet, gentle, loving man.

After his death, Edith continued on her own, going to her various groups at Holy Innocents until she fell several times in one year.  Dorothy tried to get her to move in with her, but Edith refused, not wanting to burden her niece.  It was at her own insistence, then, that she be admitted to a nursing home, and if she is sad because of it, she does not let on.  In September of 1995, she left the apartment on Ohio Street, the place where she had been born and where she had lived for over eighty years.

With incredible positivity and hopefulness, she is trying her best to adjust to her new home.  She says she has always “taken things in stride” and gets a lot of comfort from prayer.  Being in a nursing home is “not so bad” she says.  “I already have a lot of friends.”